The first time a player tries to use a the Spore Launcher, he or she must make a Handle Animal check to decide how it reacts. The player must make a skill check even if he is not trained in this skill. Use the following table to determine the outcome of the check.

The primary attack of the Spore Launcher is to launch an explosive spore at it's effective range. The explosion deals full damage to any target directly hit, and half damage to all creatures within 10 ft.

The secondary attack of the Spore Launcher is to launch an explosive spore at half it's effective range. This spore then bounces around at random angles. The spore bounces 10 ft each time until it bounces 5 times or collides with a living creature. Upon hitting a wall or other blocking geometry, the GM must decide how the spore bounces and at what angle. This is left entirely up to the GM, as there are no set rules on ricochet mechanics. 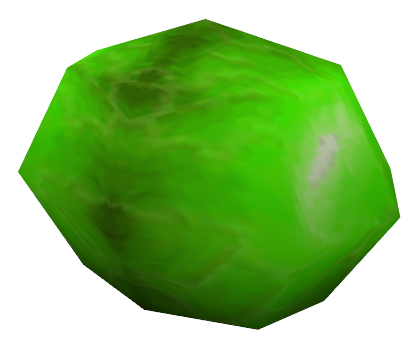 A spore. Otherwise known as "ammo"