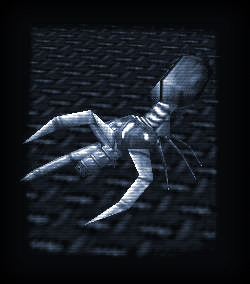 The Shock Roach has all the characteristics of a large insect, with six legs and a tri-segmented body.A Shock Roach can move, react and attack of its own accord when not attached to another living being.

By squeezing a trigger gland, the player can force the Shockroach to spurt a rapid burst of electricity at a single position. These bolts of lightning deal 1d6 damage per hit, and 1d4 damage the next round due to long term electrical damage. Organisms that are killed by an electricity bolt and take more damage by the electricity next round, blow up in a 5ft radius.

The Shockroach regenerates lightning reserves at 4 every 1 round, and can be fired 4 times every round.

If fired underwater, a Shockroach kills itself and the organism that holds it, as well as all organisms immersed in the body of water the Roach was shot in.