Hedonistic creatures that frolic in the wild places of the world. 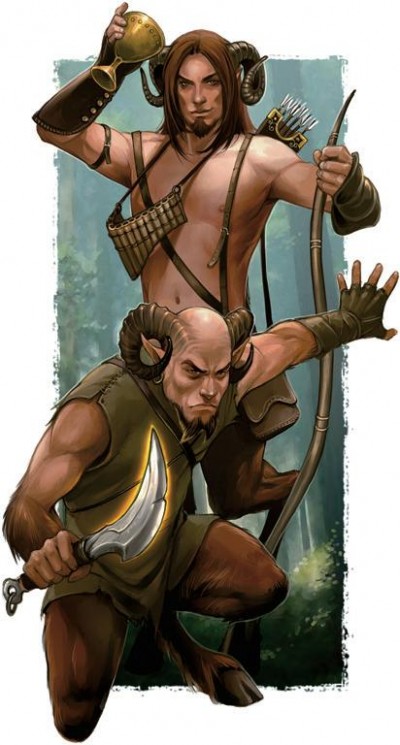 Satyrs, and Fauns, are lustful creatures from the Feywild. They have a deep enjoyment of all things pleasurable and have often brought themselves to near self-destruction in the pursuit of them. Still even with this natural flaw they find themselves attuned to the world around them and when the need arises they can be driven by a sense of community and preservation.

Play a Satyr if you want...

Satyrs are best described as a horned man (or woman, although females are often called "Fauns") with the legs of a goat. A satyr's hair is red or chestnut brown, while its hooves and horns are jet black.

Satyrs are self-centered, greedy, and decadent creatures that enjoy food, drink, and other pleasures. They use sly trickery to take what they desire from others as it pleases them. If denied the ability to take what pleasure they feel they deserve they will fall into a murderous mood attacking without warning.

Winsom is a satyr bard. He has always enjoyed making music and watching as others dance and frolic to his tunes. If left to his own devices he would have spent his entire life drinking and playing songs for any who would listen. But that was not to be, a group of foul orcs came upon his gruppo one evening and before they could rally their wits the entire group had been slain, except for Winsom. Barely alive he stumbled into a camp of adventurers who have nursed him back to health, and they have pledged to aid him in hunting down those destroyers and making them pay.

Saphos is a faun ranger. While most females of her gruppo spend their days either pleasuring males or tending to the children Saphos has always felt drawn to the depths of the forest, and the animals that live within it. For many years she did what was expected of her and only dreamed of bounding through the dense foliage of the woods, but as time passed she could not resist nature's call. At first she would sneak off and spend a few hours studying the animals and plants near her gruppo's territory, but over the years she continued to stray further away and spend more of her time practicing hunting and watching nature at work. Then one day, while she should have been tending the babes of the gruppo, she had gone off to hunt stag and in her absence a wolf desended on her charges. By the time she returned the wolf had killed all but a few of the defensless children, fearing the retribution she would face Saphos fled. Now she is torn between guilt and a need to see the wide world, and she only hopes that one day she will be able to atone for her mistake and make a new life for herself.

Laurel is a satyr rogue. He was once one of the greatest tricksters in his entire gruppo, until one day he entered into a competition with a masked satyr who challenged him at several games. Laurel was unable to defeat this satyr as it seemed he possessed supernatural abilities, and upon closer inspection Laurel learned that he did. His opponent was using a magical ring to aid him and make Laurel look the fool, so in a fit of rage Laurel killed him in front of everyone. Unfortunately when the mask was removed it was discovered he was the son of one of the elders, and so Laurel was exiled. Now he wanders alone looking for others to give him the camaraderie he so loves.

Satyr usually live within a general area of forest, but rarely establish permanent residences until they are too old to move without assistance and those that do will often build homes in old forest-covered ruins. A given territory of forest can range between five to thirty miles, which the Satyr will defend from other Satyr with a mix of traditional games, trickery and often furious violence. Fights between Satyr are undesirable, humiliation is both preferred and more painful than a battering, although most Satyr will resort to physical conflict particularly if they feel they are starting to "unfairly" lose a contest.

Children are taught to use their wits and wisdom from an early age. They game with other children at composing clever lyrics, songs, and pranks. A good prank is always appreciated, especially by adults who take its success and a sign their child is competent and learning, a bad prank is sorely frowned upon as a sign of laziness or incompetence and can result in severe punishment. Most Satyr despise having to "waste" too much of their time on raising their young, and any that demand too much attention may find themselves abandoned and left to perish on their own in the wild.

Satyr refer to their own tribes as "gruppos" which roughly means many people. Satyr tribes are not family or tradition oriented. They are bands of Satyr that seem to get along, like a group of friends. Each gruppo is led by a tripart council of elders, between the three of them decisions are made although those decisions are both few and non-decisive. Gruppos seldom produce anything more then art and intoxicating beverages. Anything else they need they normally try to steal, or trick, away from other societies they live near. Gruppos spend most of their days (and nights) involved in wild parties filled with various pleasurable excesses.

The following feats are exclusive to the satyr race.