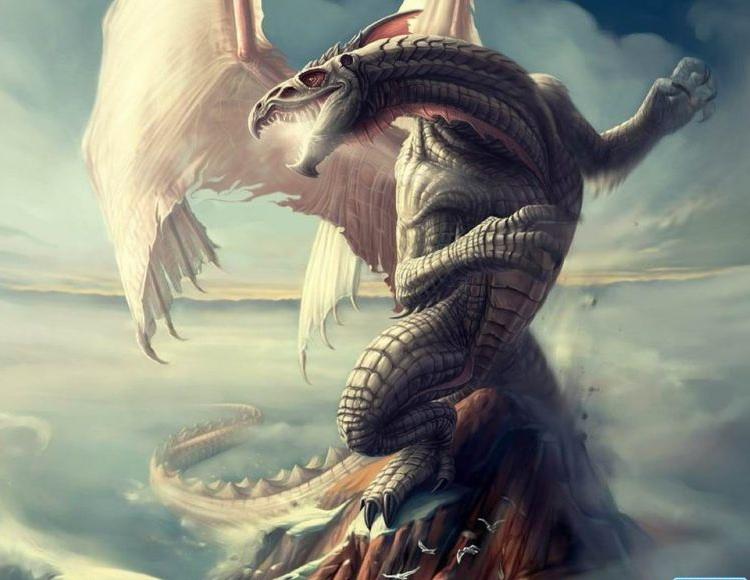 The pure gleam of mount Olympus is reflected in the white-gold scale of these celestial dragons, who carry an aura of command and loyalty around them at all times. They are the purest of dragonkind, and have devoted their loyalty to the guardians of the celestial spheres, who use these fearsome champions of good as mounts and airborne fortresses from which to oversee the battlefield. Olympus dragons live at the highest peaks of Celestia and guard it ever-diligently from fiendish interlopers.

The scales of the majestic Olympus dragons are perfectly smooth and naturally engraved with celestial glyphs. They gain the bulk of their immense power from pure divine origins and are considered the mortal enemies of the vile and twisted Lethus dragons. The first 6 categories are considered non-epic, and the last 6 are considered epic dragons.

Olympus dragons are, when compared to almost any other species of true dragon, uncharacteristically indifferent to the lure of gold and jewels, but they highly value and appraise artwork and cultural memorabilia. It is then not unlikely for an Olympus dragon to have its lair decorated by a quaint collection of oddities from across the planes. Despite their reputation as stalwart champions of good and as being mounts for the most powerful celestials - even for certain gods - those that stray from Celestia are often somewhat provincial in their dealings with sentient beings. Olympus dragons are almost always unprejudiced, and have a deep-seated respect where it is due, even for the smallest of creatures. The griefs and troubles of a poor commoner are held in the same regards as the whims of kings (and most often higher). As such, they indiscriminately risk themselves to defend those who cannot defend themselves. Olympus dragons respect courage to stand up to those who would seek to bully or oppress, and selflessly reward such courage and truth of spirit when they deal with mortals. On the other hand, cruelty and other such atrocities are met with swift and immediate reprisal.

An olympus dragon’s natural weapons and any weapons it wields in any other form it might take are treated as good-aligned as well as magic (wyrmling – adult) or epic (mature adult – great wyrm) for the purpose of overcoming damage reduction.

Aside from possessing the natural weapons, abilities and traits innate to all true dragons, Olympus dragons have the following unique qualities.

Breath Weapon (Su): The Olympus dragon's breath weapon deals damage that stems completely from a divine source and is not reduced by any energy resistance. The dragon may choose to project its breath weapon in either a cone or line of appropriate size at every usage.

Enhanced Magic (Su): An Olympus dragon's body plays host to the enhanced magic trait, as if it were a demiplane unto itself. Spells cast by the Olympus dragon with either the light or healing descriptor are empowered and maximized without requiring a higher-level spell slot. The enhanced magic effect extends to the dragon's rider, if it has one.

Sacred Shield (Ex): The Olympus dragon's body is protected by a field of divine energy, bestowing upon it a sacred bonus to its Armor Class equal to its Charisma modifier. An Olympus dragon also gains this bonus to all initiative checks.

Spells: Olympus dragons cast spells as a cleric of their effective caster level and have access to two of the following domains; Air, Good, Healing, Protection and Sun.

A mature adult Olympus dragon's natural weapons are treated as epic and good-aligned for the purpose of overcoming damage reduction.