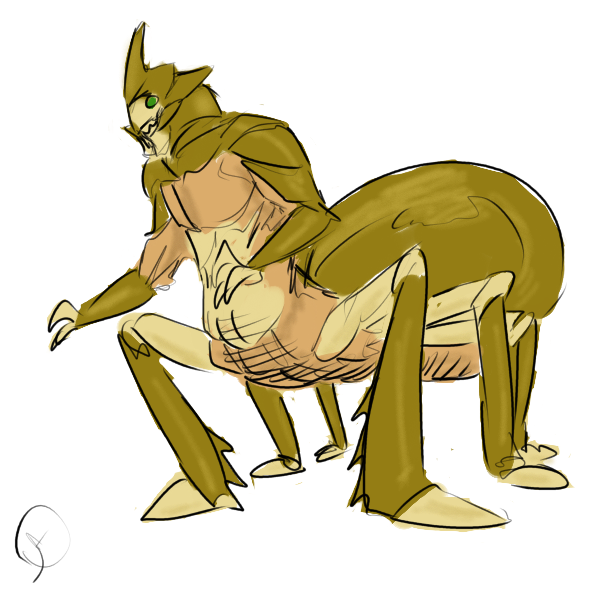 Denizens of the underkingdoms of Northrend and servants of the Lich King.

The Nerubians are keepers of the dark, hidden places of Northrend. They are among the oldest of the races of Azeroth, tracing their lineage back to the Well of Eternity and the influence of the Old Gods. They bore witness to the rise of Ner'zhul, the Lich King and were the first to stand against his forces as they spread over Icecrown. Though they eventually lost the battle agains the Scourge, they proved one of the greatest opponents the Lich King had ever faced, due to their immunity to the undead plague and their immunity to mental domination. Like their cousins the Qiraji follow C'thun, the Nerubians revere Yogg-Saron, and serve and conspire with the Faceless Ones; his servants.

Play a Nerubian if you want...

Nerubians are large, spider- and scarab-like creatures. Their bodies feature the eight-limbed arrangement of the former, while their carapace is reminiscent of the latter. The upper part of a Nerubian's body, the torso, follows a similar design to the upper bodies of familiar bipeds; it hosts two of the creature's eight limbs as arms attached to its shoulders and bears the creature's head between them. In terms of rough physical layout, their bodies are most similar to a Centaur or Dragonspawn, but instead of a quadrupedal lower body the Nerubian form transitions from its abdomen to a six-legged thorax.

Depending on an individual Nerubian's caste, its carapace may be thicker or thinner, more colorful or more subdued. The Nerubian Spider Lords are armored from head to claw in iridescent purple, grey and black plating. They appear much bulkier than the smaller and more agile Webspinners and Workers, which have a lighter carapace, usually in brown and/or grey.

After losing their battle against the Scourge, the Nerubians became servants of the Lich King. Though they were initially immune to his mind control, over time many of their kind lost this resistance or chose to relinquish it in their servitude, becoming slaves to the will of Ner'zhul. Of the ones that retained their resistance, however, formed a group of dissenters who's objective was to reclaim their home of Azjol'Nerub and defeat the Scourge.

The Nerubians are clever, but do not trade in deception. They value strength and tenacity of body, spirit and mind.

While not usually disposed to seek adventure or engage in solo endeavors, a few Nerubians acquire the wanderlust of the adventurer. These Nerubians are somewhat frowned upon by others of their kind, but are not otherwise persecuted unless they become traitors. The ones that go adventuring often do so to test and prove themselves if they are of a warrior caste, or to seek hidden knowledge if they are of a seer caste.

When your Nerubian character gains a class utility power after 1st level, you can forgo taking a power granted to you by your class. Instead you gain a Nerubian utility power of the same level or lower.