The Material Plane is made up of a number of different nations, at least in the known world. The majority of these nations allow for players to come from, but there remain a few in which no player character should be from, unless given special permission from the DM. 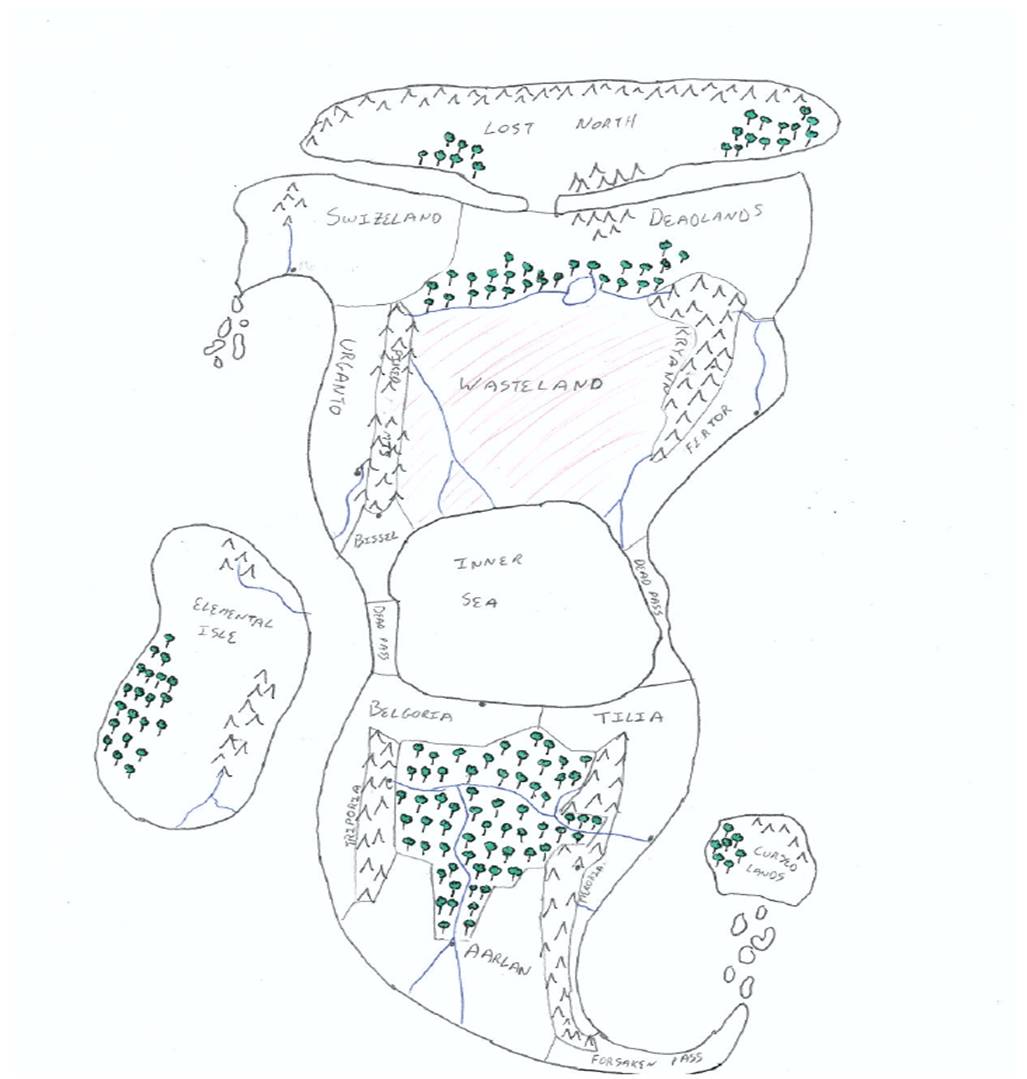 Aarlan is the southern, central nation of the southern continent and is made up of vast grasslands and open plains. Founded south of the Great Forest, north of the ocean and between the Triporia and Meroria Mountain ranges, Aarlan has been able to maintain its stability while growing to conquer many of the lesser plain lords. Originally the nation was made up of nomadic tribes, though once they started banding together and forming villages, the nation was able to grow and absorb the other tribes with ease.

Belgoria is amongst the most ancient of all nations, able to track their capitol city, Loria, to nearly 1,200 B.C.E. Though not a formal nation until 0 C.E., Belgorians take pride in the fact that they have such a long, tracked history, where even the other great nations fail. To the north lies the Inner Sea and one of the two Dead Passes, while the great ocean covers the entire west coast. Since Belgoria is shaped like an upside down L, the majority of their neighbors, and threats, lie to the east and South. Belgoria only has a small tract of land bordering Aarlan in the south and Tilia in the east, with the Great Forest and the Triporia mountains swelling all the other borders.

Bissel is one of the newest nations, having just recently broken free from Urganto after hundreds of years of rebellions and revolutions. Lasting nearly fifty years, their freedom was won only with incredible bloodshed and a hefty cost in resources. With their freedom, the nation became a first in politics, leading a full democracy in which every village elects their village mayor, and these village mayors in turn elect the council and President of the nation. The capitol of Bissel is Ma’ Dela, a large city located on the southern tip of the Piked Mountains. Ra’ Shorlutian is the only other major city, located on the Inner Sea and near the Dead Pass.

Amongst the oldest of the nations that remain today, Fertor shows its age by the number of large cities within its borders. To the north lay the Deadlands, to the west the Kryann Mountains and the Wastelands, and to the south the Dead Pass. Thanks to such unforgiving neighbors, few organized armies have ever lay siege to the fertile lands of Fertor, allowing it to grow nearly unhindered once the seeds of growth were planted. Though raids of beasts may occur, the pact of peace sworn with the Kryann Mountain Dwarves two hundred and two years ago has granted a strong alliance between dwarf and Fertorian.

The Kryann Mountains are the Eastern most mountain range of the northern continent. With the Deadlands to the north and the Wastelands to the west, the natives of the Kryann Mountains have needed to become hardy warriors, ever vigilant and ready to defend their homes. Forming a pact of peace with the Fertorians two hundred some years prior has secured their eastern border from most threats and allowed their focus to continue to grow where danger resides.

The Meroria Mountains us the largest mountain range in the known world, stretching nearly the entire length of the southern continent. The habitants of the mountains are as diverse as anywhere else in the world, and there is no single, ruling nation here. Instead, there are many different groups living in the mountains, most no larger than a tribe or single city. Because of their close proximity, war is a common issue, though rarely does this spill from the mountains to the lower lands nearby in more than a small raiding party. The mountains are split by the Silver River, a nice valley forming between the two sections that have caused some scholars to declare the Meroria Mountain Range is, in fact, two separate ranges.

These are the different nations that make up the Material Plane that most characters will not be from. These are the wild lands, darklands and simple vast seas that fill in between the major nations.

Swizeland is the northern most nation known as a nation. Located on the north western portion of the continent, it has massive amounts of open land which is often covered in snow. A small mountain range exists towards the north western part of the nation, but going any distance from those mountains see little more than small hills and slopes. Swizeland has a small archipelago on its south western portion, with many small tribes of people living upon the islands. The capitol, Mortholm, is located along the cost and the Morthilia River, the only major river inside the entire nation. The only other city of size is Ralioholm, located on the mainland right where the archipelago begins.

The Great Forest, like the Wasteland, sprung into existence when Zora attempted the great purge. Unlike the nation of Arya who was taken completely by surprise at this action, the Nortilian empire had enough warning and powerful enough mages to attempt to lessen the damage of the purge. Unable to outright stop the destructive magic, they were able to modify it and use it to create a massive forest instead of a vast wasteland. Most of those that lived there died, the remaining were forever changed from human to elven, and thus the first elf was born. The Great Forest now resides between the Triporia and Meroria Mountain Ranges, as well as south of Belgoria and Tilia and north of Aarlan. Until the great war of the southern continent when adjacent nations started to do massive logging of the forest, the Great Forest expanded nearly to the Inner Sea and well much further along the mountain borders.

Tilia is the eastern most nation upon the southern continent and the longest, covering land from the Inner Sea all the way to the Forsaken Pass. Though the southern portion of the continent is thin, it butts right up against the Meroria Mountains along nearly its entire west side, having long since hindered the nation’s ability to expand.

Urganto is a costal nation on the Western Ocean. Their entire western border runs along the ocean, and their entire eastern border is blocked off by the Piked Mountains. The tall mountains are only separated at one place, the Dire Valley, ever patrolled by bands of orcs coming in from the mountains. To the north lies Swizeland, and to the south Bissel. Mira, the capital, is located at the head of the Miran River and near the base of the Piked Mountains. Norgata and Aballa are both coastal cities, while Tora is in the northern reaches near the mountains and Bana remains near the Bissel border at the very southern edge of the Piked Mountains.

The Wasteland is not a nation, but rather an enormous swath of land in which very little manages to grow. 5,700 years ago, the nation of Zora realized that it was in a losing war, and to counter this they blasted the world with raw energy in all directions. The Wastelands were once fertile, productive lands with many cities and millions of people, but the moment the purge happened, everyone was killed and the land ruined. Now, the Wastelands is so named because it is a giant desert which little can grow and nothing thrives in.