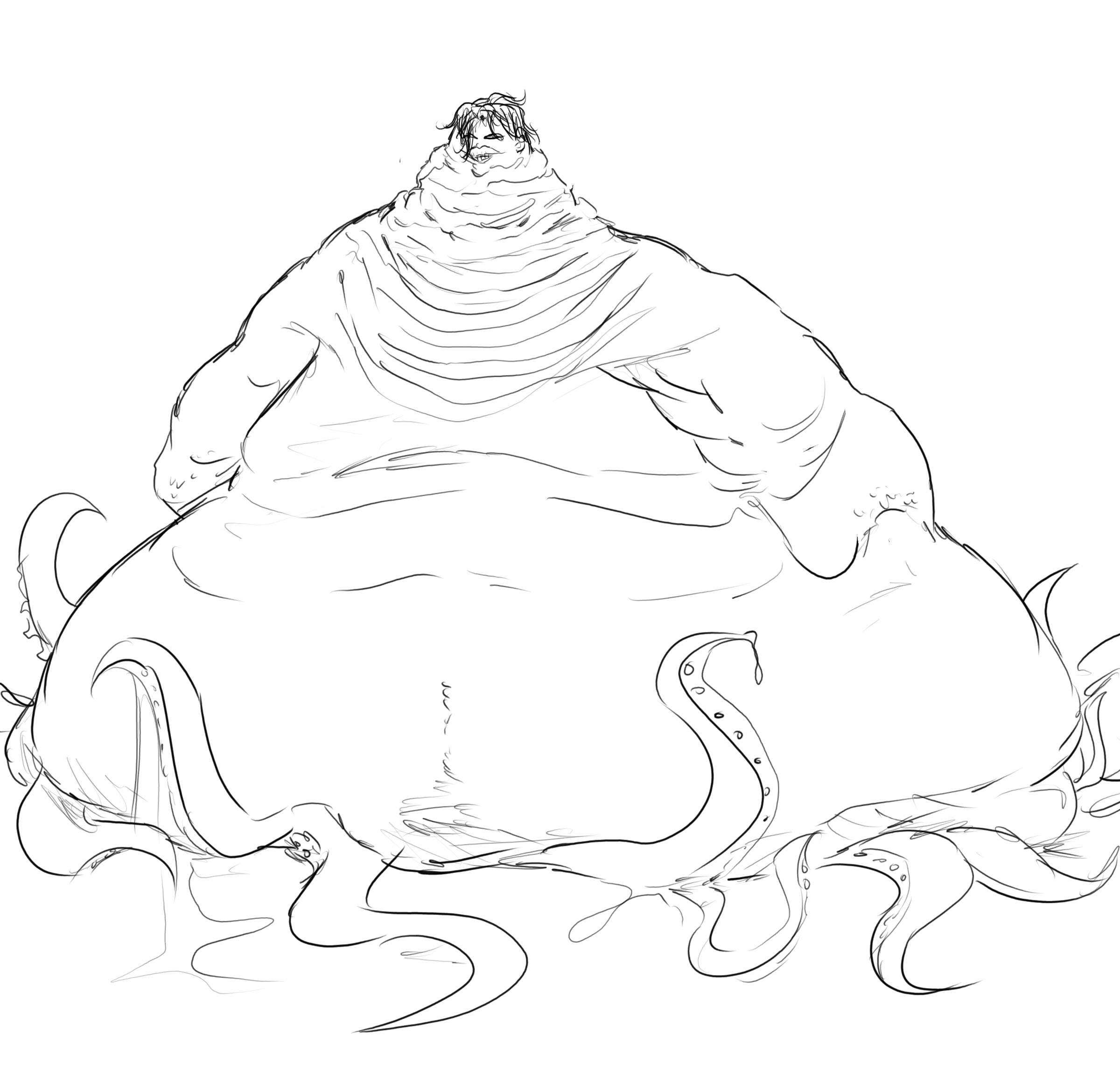 This woman is fat beyond belief. As far as you can tell, she is all blubber and no skeleton. Said blubber covers her legs entirely, undulating along the ground and propelling her forward. Her hands are hidden somewhere behind the two blobby appendages that possibly served as arms at one point. The only thing that reminds you of a human is her head, fleshy and morphed atop a record of thirty-two chins. All at once, her fat begins to move, and tentacles lash out at you...

Wizards speculate that the Morbidly Obese Abomination was once a human woman named Bertha, somehow having been mutated horribly during a magical accident. How she managed to survive is unknown, as are her goals now. It seems that this woman is doomed to her morphic hell for all eternity. Or until the unholy diabetes gained from this kills her. Or the heart failure. Or the compressing chest. Or the aneurysm caused by massive amounts of exertion.

The Morbidly Obese Abomination does not attack unless attacked first, though her reputation often merits an attack anyway. She usually opens up in combat with a Trailer Trash Body-Swing, followed by using her Earthquake Slam and Bertha Meteor abilities to remove multiple opponents. Against escaping opponents, she will use her Fat-Punch to reel them in.

Earthquake Slam (Ex): When Bertha sits down, everything within a 300 ft radius is affected as though earthquake had been cast in that area (CL 20). This is NOT a spell-like ability. Bertha is literally so fat that her butt causes tectonic movement.

Bertha Meteor (Ex): In the following round of her Earthquake Slam, Bertha begins to bounce five feet off the surface of the ground, triggering three more Earthquake Slam effects (she cannot extend her Bounce on these). After these three effects are done, Bertha can skyrocket into the air, rising for three rounds at a rate of 120 feet per round. While she rises, Bertha gradually blocks out the sun, starting with normal conditions in the first round, followed by shadowy illumination in the second round, and darkness in the third round. It takes Bertha one standard action to fall back to earth. Anyone caught underneath Bertha's face dies instantly (no save). All creatures within a 500 ft radius of the area take 15d10 points of slashing and piercing damage from flying debris. They also must make a DC 20 reflex save or be blown 6000 feet away by rushing wind.

Drag (Ex): With a successful grapple check (using her Fat-Punch), Bertha drags her opponent ten feet towards her each round (provoking no attacks of opportunity), unless that creature breaks free, which requires a DC 25 escape artist check or a DC 21 strength check. The check DCs are strength-based, and the escape artist DC has a +1 racial bonus. Bertha can draw her opponent within 80 ft and deliver 5 Slams with a +4 attack bonus in the same round.

Trample (Ex): Reflex DC half. The save is Dexterity-based.

Swallow Whole (Ex): Bertha can attempt to swallow an opponent into her fat with a successful grapple check. The swallowed creature takes 20d10 points of bludgeoning damage and is treated as though he had been affected by Bertha's Rupture attack. A swallowed creature can cuts its own way out by using a light slashing or piercing weapon to deal 100 points of damage to Bertha's fat (AC 39). Once the creature exits, the morphic nature of Bertha's fat closes the hole; another swallowed opponent must cut its own way out.

Despite her infamy, Bertha has become the topic of several popular jokes about her ridiculous weight.