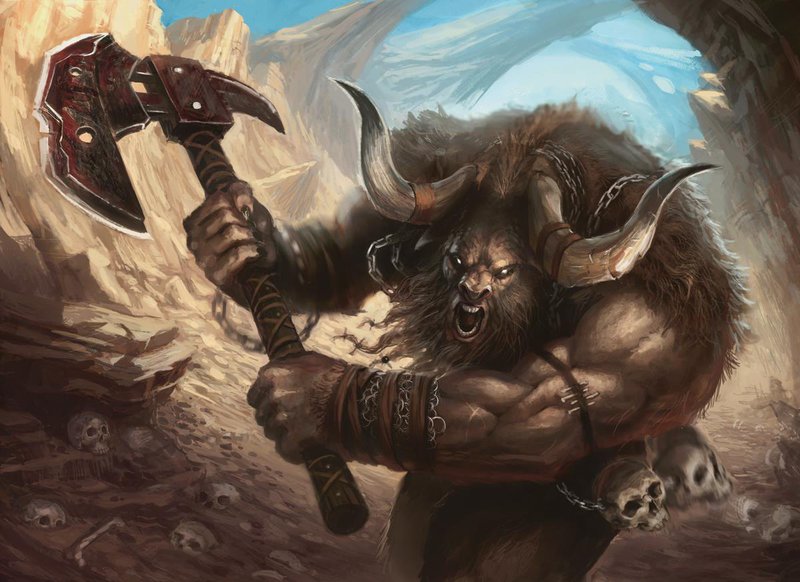 A charging minotaur with an axe, Source

A minotaur combines the features of a human and bull, with the build and musculature of a hulking humanoid, but with cloven hooves, a bovine tail, and, most distinctive of all, a bull's head. Fur covers a minotaur's upper body, coarse and thick on the head and neck, gradually thinning around the shoulders until it becomes humanlike hair over the arms and upper torso. The thick hair turns shaggy once more at the minotaur's waist and thickens around the loins and legs, with tufts at the end of the tail and around the powerful hooves. Minotaurs take pride in their horns, the sharpness, size, and color of which are related to an individual's place in minotaur society. Fur and skin coloring runs from albino white to coal black, though most minotaurs have red or brown fur and hair.

Minotaurs embody the tension between civilization and savagery, discipline and madness, for they stand in two worlds. Tugged towards violence but bound by conscience, numerous minotaurs are driven to rise above their dark impulses. Such a minotaur seeks the balance between the monstrous and the refined. Innumerable minotaurs give in to the temptations staining their souls and find themselves thralls to Baphomet, The Horned King. Minotaurs must struggle to become more than the beasts they resemble or else succumb to the demonic brutality they despise.

Symbol of the Labyrinth

Labyrinthine patterns are important to minotaurs, and these decorations appear on their clothing, armor, and weapons, and sometimes even on their hides. Each pattern is particular to a clan, and the pattern's size and complexity help minotaurs identify family allegiance and caste. The patterns evolve through the generations, growing more expansive based on clan members' deeds and a clan's history.

Minotaurs primarily use either Giant or Abyssal dialect and thus minotaur names have evolved from these scripts.

Monstrous humanoids struggling against villainous tendencies.
Ability Score Increase. Your Strength and Constitution both increase by 1.
Conqueror's Virtue. Your choice of your Strength, Intelligence, or Wisdom score increases by 1.
Age. Minotaurs age and mature at about the same rate as humans up to the age of 18. From then on they age slowly staying fit for at least 150 years.
Alignment. Because of their demonic heritage, most minotaurs are chaotic in nature. Although good aligned minotaurs do exist, the majority of their race choose a more neutral outlook on life.
Size. Minotaurs are much larger than other races, reaching heights over nine feet by maturity and weighing well over 500 pounds. Your size is Large.
Speed. You have a base walking speed of 30 feet.
Horns. You are never unarmed. Your horns are a melee weapon that deals 1d8 piercing damage, and you are proficient with your horns. Your horns grant you advantage on all checks made to shove a creature, but not to avoid being shoved yourself.
Hammering Horns. When you take the Attack action on your turn to make a melee attack, you can attempt to shove a creature as a bonus action. You cannot use this shove attempt to knock a creature prone.
Goring Rush. When you take the Dash action on your turn, you can use your bonus action to make one melee attack with your horns.
Labyrinthine Recall. You can perfectly recall any path you have traveled.
Languages. You can speak, read, and write Common.