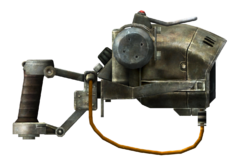 The Mesmetron is an experimental pre-War "non-lethal pacification" weapon that was being tested in the months immediately preceding the Great War. It operates by sending a signal pulse into a human target's brain that scrambles higher-level mental functions, leaving the target extremely susceptible to suggestion. Still in open beta testing, the weapon was found to have the potential to trigger two undesirable side-effects: extremely increased aggression, or spontaneous cranial eruption.

Attacking with the Mesmetron is considered a ranged touch attack, and as such ignores Defense bonuses from armor. This weapon only works on Humans. On a successful attack roll, the target must roll a Will save vs DC 25. If they succeed, they suffer no effect. If they fail, roll on the table below:

On a confirmed critical hit, the target is instantly killed as their head explodes violently.