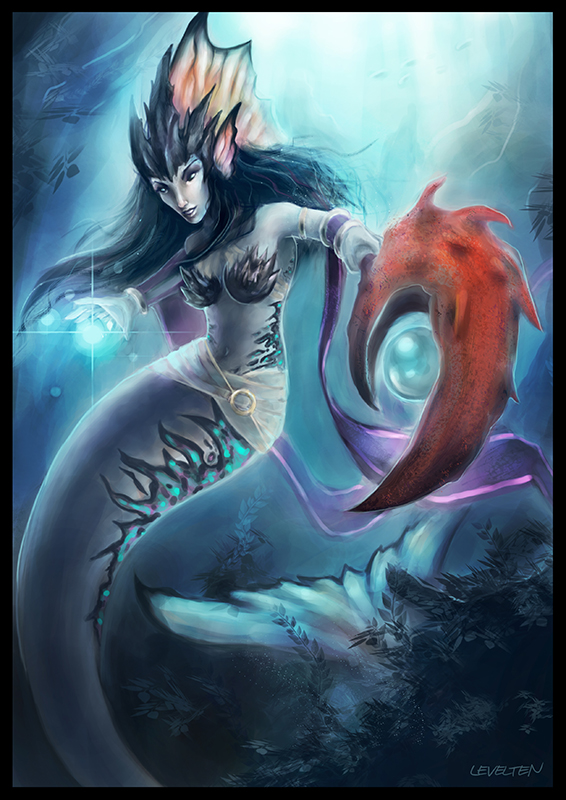 The merfolk are a strange but mirthful race of aquatic beings who populate the seas between the two major Tirran continents, Loupe and Halimeda.

The merfolk that inhabit the waters between the Tirran continents have long been known to the dwellers of the surface, and have had countless interactions with them. Most form small communities and settlements beneath the waves, to protect themselves from dangerous predators of the deep, and are granted some benediction from the progenitor of their species, the Aesirean Goddess, Undine.

Merfolk are first documented as interacting with the surface dwelling races as early as the Third Era, preceding the Kaladonian Age. It is said that this inevitable interaction was spawned by the goddess' slumber, the fate that befalls all Aesir, and a need or desire for trade and community with the surface; Legends of the time abound about small sightings of merfolk in various communities, but ultimately, this appearance was the moment the myth was dispelled and the worldwide community first became aware of their existence.

For more information on the individual characteristics and preferences of the Merfolk, see the Merfolk page.

Abilities: High Charisma is one of the more desirable traits among the merfolk, given their natural inclination to charisma-based classes and jovial nature.

All of the following are class features of the Merfolk paragon class.

A Merfolk paragon is proficient with all simple weapons, and with light armor.

At 2nd level, a merfolk paragon's voice is considered a masterwork instrument, granting her a +2 circumstance bonus on vocal Diplomacy and Perform checks.

At 2nd level, a merfolk paragon's mastery over her form is worthy of a paragon of her race. She can perform her special transformation ability a number of times per day equal to her charisma modifier.

At 3rd level, a merfolk paragon gains a permanent +2 racial bonus to her charisma score.

At 3rd level, a merfolk paragon can use the druid's Wild Empathy class feature, but only on animals or magical beasts found in or under the water, and uses 1d20 + her hit die for determining success.