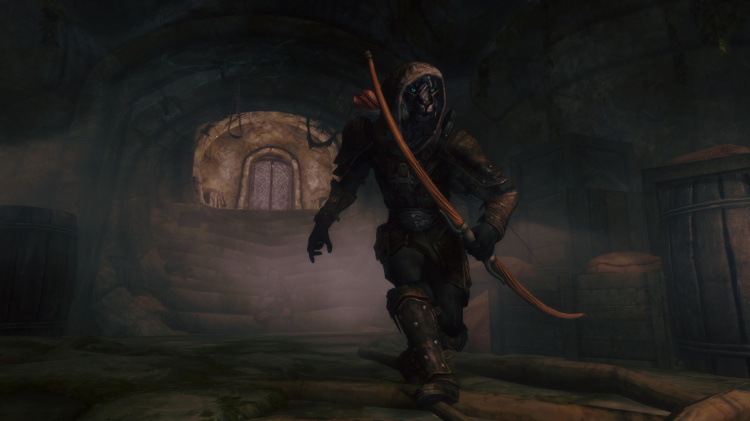 Master Thieves are those who have trained for years to become masters the art of thieving. They are the "Key to the World"... They can pick any lock and steal anything. Master Thieves are quick, agile and cunning. They are especially adept in bows and daggers to surprise an enemy from stealth or scout, or to deliver critical hits.

The Master Thief is the archetypal Stealth character, being masters of the three Dexterity Skills(Acrobatics, Sleight of Hand and Stealth). This naturally makes them great at subterfuge and burglary. On the downside, they are less able in combat.

Stealth is a core thief skill. When plying their shady trade in towns and cities, stealth lets thieves avoid the attention of guards, enemies and house owners, as well as offering opportunities to pick a few pockets. When out adventuring, a sneaky thief can avoid dangerous enemies or deliver powerful Marksman sneak attacks. Security allows the thief to bypass locked doors, or to pilfer dungeon chests full of valuable loot right under the noses of their guardians.

Sneaky in social skills too, Mercantile comes in handy when a thief is selling off their (possibly ill-gotten) gains. High Charisma is needed for a Master Theif as it helps butter up merchants to get even better prices, but perhaps more importantly is also key to resolving some quests without confrontation.

Marksman/archery is the only offensive skill that the thief has. Fortunately, it works well with their other skills; Acrobatics is great for getting to safe sniping perches, Stealth provides a damage boost against unaware enemies, and Light Armor provides some protection without slowing the thief down too much. Thieves prefer to fight using ambushes and evasion, placing guile above brawn. A thief is fast, agile, and highly mobile, and can make effective long range attacks with bows. However, they can find themselves in trouble if they let themselves get cornered by powerful melee opponents.

Any race can train to become a master thief, providing they are patient and have a high dexterity.

A Master Thief can have any alignment. Most are Chaotic Neutral or even True Neutral. There may be a few of those who have turned to evil and murder. But most are just trying to make some gold without the need for violence.

As a Master Thief you gain the following class features.

Once per turn, you can deal extra 1d6 damage to one creature you hit with an attack if you have advantage on the attack roll. The attack must use a finesse or a ranged weapon.

The amount of the extra damage increases as you gain levels in this class, as shown in the Sneak Attack column of the Rogue table.

At 6th level, you can choose two more of your proficiencies (in skills or with thieves' tools) to gain this benefit.

During your rogue training you learned thieves' cant, a secret mix of dialect, jargon, and code that allows you to hide messages in seemingly normal conversation. Only another creature that knows thieves' cant understands such messages. It takes four times longer to convey such a message than it does to speak the same idea plainly.

In addition, you understand a set of secret signs and symbols used to convey short, simple messages, such as whether an area is dangerous or the territory of a thieves' guild, whether loot is nearby, or whether the people in an area are easy marks or will provide a safe house for thieves on the run.

As a Master Thief, you have learned several spells to assist you in your trade. Similar to druids, you know all your spells however you must prepare them each long rest.

Your Spellcasting Ability modifier is Dexterity

Starting at your second level, you can use your Bonus Action to take the Dash, Disengage, or Hide action.

At the third level, the damage rating of any ranged weapon increases by one size. Increase again at level 7, level 13 and level 20.

At 3rd level, you choose an archetype that you emulate in the exercise of your rogue Abilities, such as Thief or Assassin. Your archetype choice grants you features at 3rd level and then again at 9th, 13th, and 17th level.

At 3rd level you receive your Roguish archetype of the thief. This grants you a feature at 3rd level and then again at 9th, 13th, and 17th level.

Fast Hands Starting at 3rd level, you can use the bonus action granted by your Cunning Action to make a Dexterity (Sleight of Hand) check, use your thieves' tools to disarm a trap or open a lock, or take the Use an Object action.

In addition, when you make a running jump, the distance you cover increases by a number of feet equal to your Dexterity modifier.

Supreme Sneak Starting at 9th level, you have advantage on a Dexterity (Stealth) check.

Use Magic Device By 11th level, you ignore all class, race, and level requirements on the use of magic items.

It Was Just The Wind At 17th level, you acquire the ability to completely vanish right before an enemies eyes. You have mastered stealth to the point where you are able to turn invisible without the need for magical items or spells. When an attack is made by any creature within a 20ft radius or this ability is used during combat, roll a 1d4 to determine how many rounds you will remain invisible. Additionally, you gain 4 points to DEX for a maximum of 24.

Assassinate From 3rd level, you are more deadly when you catch your opponents off guard. You have an advantage in attack rolls against any creature that has not yet reached its turn in combat. In addition, any attack you make against this creature that is surprised will be a critical attack.

Specialization in infiltration From the 9th level, you can unfailingly create fake identities for yourself. You must spend seven days and 25 gp to establish your background, profession and affiliations for an identity. You cannot establish an identity that belongs to someone. For example, you should purchase appropriate clothing, letters of introduction and a seemingly official certificate to establish yourself as a member of the trading house of a remote city, so you could introduce yourself in the company of other wealthy merchants. Later, if you adopt the new identity as a disguise, other creatures will believe that you are that person, until they have some obvious reason to think otherwise.

Impostor At 13th level, you acquire the ability to imitate someone else's speech, writing and behavior, infallibly. You should spend at least three hours studying these three components of a person's behavior, listening to his articulation, examining his writing and observing his mannerisms. Its ruse is imperceptible to a casual observer. If a suspicious creature suspects that something is wrong, you have an advantage in any Charisma check you make to avoid being detected.

Assassins Reflexes When you reach 17th level, you can take two turns during the first round of any combat. You take your first turn at your normal initiative and your second turn at your initiative minus 10. You can't use this feature when you are surprised.

Starting at 5th level, when an attacker that you can see hits you with an attack, you can use your reaction to halve the attack's damage against you.

At 9th level, Lady Luck bestows upon you a blessing, allowing you to re-roll any saving throws or initiative rolls of 5 and lower, including natural 1's.You must use the new roll, regardless of value. This may be used up to your proficiency bonus per Long Rest.

Beginning at 11th level, you become one with the shadows. You gain Expertise in stealth. If Expertise is already achieved, add +2 to Stealth

By 11th level, whenever you make an ability check that lets you add your proficiency bonus, you can treat a d20 roll of 9 or lower as a 10.

Starting at 14th level, if you are able to hear, you are aware of the location of any hidden or invisible creature within 10 feet of you.

By 15th level, you gain proficiency in Wisdom saving throws.

Beginning at 18th level, no attack roll has advantage against you while you aren't incapacitated.

At 20th level, if your attack misses a target within range, you can turn the miss into a hit. Alternatively, if you fail an ability check, you can treat the d20 roll as a 20.

The Number of uses is equal to your DEX Modifier.

Prerequisites. To qualify for multiclassing into the Master Thief class, you must meet these prerequisites: Dexterity 15, Charisma 12

Proficiencies. When you multiclass into the Master Thief class, you gain the following proficiencies: Stealth and Sleight of Hand