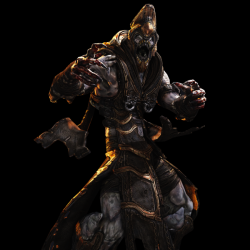 Play a Kantus if you want...

A Kantus has Leathery, tan colored skin. They are as tall as a Goliath, but are slender and much more agile than other races of even smaller sizes. Being Reptilian in nature, the Kantus has zero body hair.

Male Names: Sha, Skorge, very few more are known. Most are one or two syllable names with an s sound somewhere in the second or only syllable.

Female Names: If a Kantus female Exists, there has been no written record of their existence, let alone any of their names

Sha is a Kantus Cleric who served in the Locust-human War as a medic, who's chant could recover and inspire mortally wounded compatriots back into the fray. In a last Ditch effort to stop the destruction of the Hollow, Sha sacrificed a majority of his power. He succeeded, but was exiled. While travelling, He met his old ally, Kresh, a Dragonborn Fighter, Drinking a few Dwarves under the table. Sha and Kresh Then teamed up to begin a campaign to win the favor of the Locust Horde once again.

Skorge is a Kantus Avenger, and is the High Priest of the locust horde. He despises humanity with a burning passion, and has a desire to kill and torture every living member of the human race. He wields a fearsome Double ended Chainsaw staff that he uses to cut through solid steel.

Koraash is a Kantus Paladin who has turned his back on the Locust Horde. He had developed a feeling of Kinship with the Humans, Rather than desiring their death. He now wars against Forces of evil in the Name of Bahamut, while still retaining his respect for the Trinity of Worms. He carries His Gorgon burst Pistol still, But only uses it against other Locust.