Kadishmar is the barren desert kingdom on the southern peninsula of Aerinthia. Kadishmar was first ruled by, Rashad Al-Mir, the Merchant-Emir of the Ivory City, Talrajah. The current Emir is the eldest member of the royal family and currently has no heir. The kingdom trades with all of Aerinthia’s kingdoms and with many of the Sky Isles. 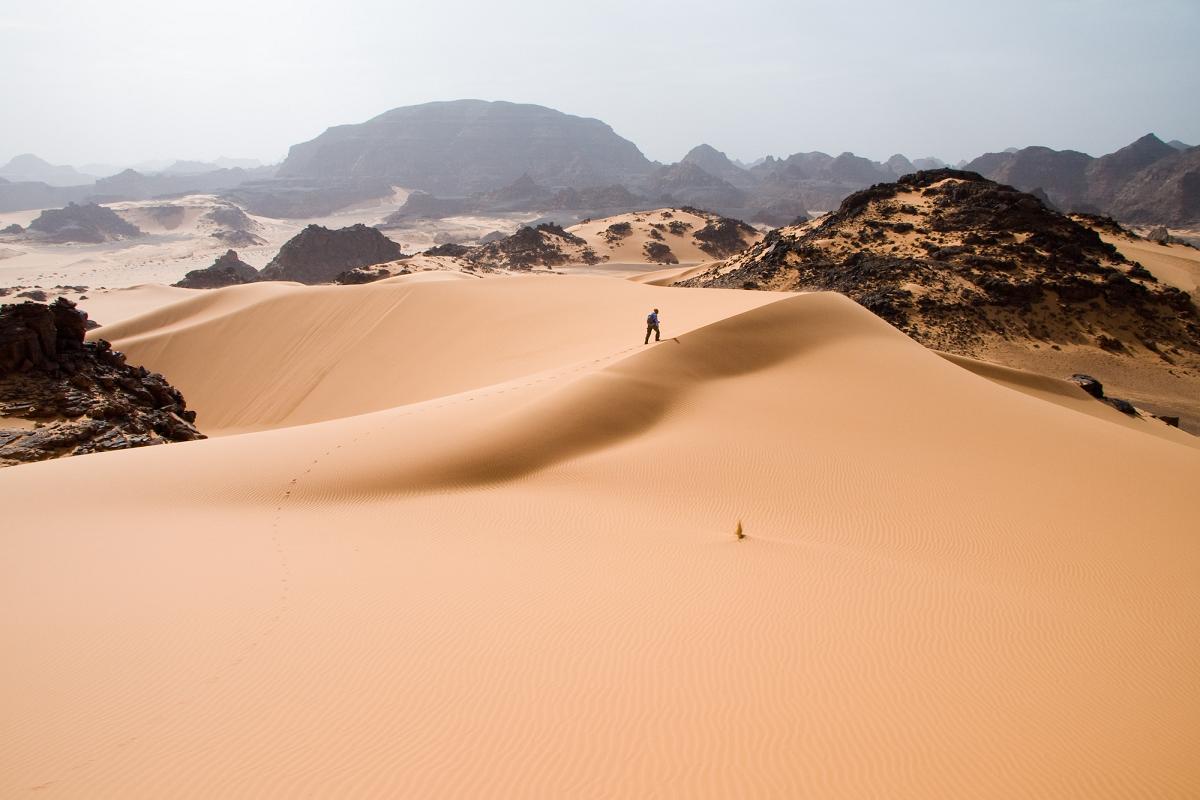 The deserts that make up Kadishmar were once covered with trees, but the water dried up, the trees died off, and the sands covered everything. The desert dunes are shaped by the winds and occasional rainfall. The center of the desert is hyper-arid, with little vegetation. The northern and southern reaches of the desert, along with the highlands, have areas of sparse grassland and desert shrub, with small trees and taller shrubs in wadis where moisture collects.

Four major rivers cross the deserts, the Jahidene, Eriti, Novari, and Hy'she. The Jahidene and Eriti Rivers are in the north of Kadishmar and run from the Shieldlands southwest across the sands. The Novari and Hy'she rivers are fed by the seasonal monsoons of the central desert and run southeast to the coast.

Massive sandstorms are a major hazard of travel across Kadishmar and adventurers must take precautions whenever possible before attempting such a journey.

A system of roads cross between the five great cities, called The Great Highways. Smaller paved roads cross the sands. Caravans of indentured servants sweep the sand from the roads at least twice a year for the highways and once each a year for the smaller roads.

Kadishmar is ruled by the Emperor, Khalifah Umar Ibn Furi Al-Musara, who poisoned his father and mother before taking the throne, then exiled his baby sister to a far away kingdom. He has been a well liked ruler by many and hated by even more. He brought back the practice of indentured servitude that his father had abolished, repaired the great highways, and reestablished many settlements which had fallen to neglect and the ever present sands. He also brought the practice of arena fighting to Kadishmar and although slavery is outlawed he has looked the other way when indentured servants are sold in the markets like slaves.

In recent years the emperor's exiled sister has slipped back across the deserts and established herself in Al'Kharj as mistress of a powerful thieves guild.

There are two dozen small settlements and five cities across the bleak deserts of Kadishmar.

The capital city of the Empire of the Sands is located near the southern tip of Kadishmar. This massive city was originally built by the Elves before the forests were replaced by the sands. Although little of the ancient city remains, except the walls and the temple plaza.

This city rests on the northwestern peninsula of Kadishmar. It is famed for both a center of knowledge and the unique glass items which are traded throughout Aerinthia. Numerous ruins and the tombs of past emperors and the extremely wealthy left over from an earlier history dot the land just east of the city.

This city is nestled between two major rivers, the Jahidene and Eriti Rivers. It hosts a governmental farm, worked by numerous indentured servants and among the largest of its kind in the kingdom. Al-Kharj is known for producing dates, vegetables (including carrots, cucumbers, tomatoes, and lettuce), and fruits (including oranges, melons, and grapes). There is also livestock and poultry, as well as horse breeding. Al-Kharj is connected to the other five cities by the great highways. In the middle of the city rests a massive water tower where water is stored for the dry seasons.

This city rests on the northern most tip of Kadishmar on the border of the Plains of Light. This city is often thought of as a border fort, because it is surrounded by a fifty foot high wall and has a two main gates. One gate leads north into the plains and the second gate opens onto the Great highway leading south to the capital. The city is well known as a place to hire mercenaries, desert guides, as well as join merchant caravans heading elsewhere. If your looking for work, Famil is a great place to go. Due to the large numbers of transients and mercenaries awaiting their next job the city employs mercenaries to keep the peace and enforce the law. Mercenaries hired to keep the peace become members of the Familian Guard. They are given a magical token by the ruling Khedive, that allows them to alert other guards of an emergency and tracks the location of every Familian Guard in the city. The city maintains a minimum of one hundred Familian Guards. Guards found breaking the law are always given the strictest of punishments. As is common throughout Kadishmar indentured servants are traded or sold in Famil, however the most common buyers are the mercenary companies who offer these servant soldiers, known as Ghulams their freedom with two years of loyal service.

This port city rests at the mouth of the Novari River in Southeastern Kadishmar and is a vital trade center for the Empire of the Sands. The Seafarers are frequent and welcome guests in the port city and the Khedive of Shi'ar personally entertains the ship captains when given the chance.

No or limited contact[edit]

Kadishite names are based on a long naming system; most Kadishite do not simply have given/middle/family names, but a full chain of names. This system is in use throughout the Empire of the Sands, but it is not common outside of Kadishmar to employ the full naming conventions described below.

Titles of importance or royalty[edit]