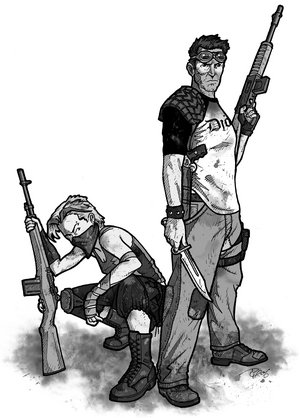 Humans, or Homo sapiens (sometimes called smoothskins or normals by ghouls and super mutants, respectively) are a species that have been more-or-less unaffected by radiation. In post-nuclear America, four major ethnic groups have so far been distinguished: African, Asian, Caucasian, and Hispanic. Evolved and mutated humans, while still members of the homo genus, are a different species from regular humans. Humans are the primary race found in the Wasteland. There are many different kinds of humans ranging from pale-skinned Vault Dwellers who have not seen natural light for generations, to primitive tribals who have developed an entirely new culture. Humans have little in common ideologically and there is no one root for all human cultures since each spawned from a separate groups of survivors.

Humans tend to be happy, hopeful, and content when in a safe, familiar place such as their homes. They are generally nice to others, though always put themselves and their families and friends before others. When threatened, they tend to overreact and become violent. But most Humans after the war devolved and reverted to slavery, murder, and theft among other vile acts or immorality and insanity.

Post-nuclear humans, as a direct result of the radiation and exposition to the F.E.V. of the West Tek Research Facility (that has mutated after the Great War due to radiation), and some other biochemical agents released into the environment during and after the Great War, exhibit more diversity, primarily in genetic structure. The aforementioned factors have resulted in an increased rate of mutations in humans, although very few of these result in phenotypical changes. Most of these changes are non-lethal, non-damaging variations in the human DNA that simply increase the genepool variety. Also, humans with minor mutations, like additional toes, skin lesions due to TDC infection, permanent red eyes, permanent varicose veins or complete lack of hair, are still considered to be normal humans.

Humans of the Wastelands are not a trusting lot when it comes to outsiders and others sentient beings of the waste. Humans view other Humans depending on their community; Vault Dwellers, for example, are xenophobic of Wasteland humans, believing they have contagious diseases and are overly violent. Most Humans can coexist with others human once trust is established.

Other sentient beings of the waste are view with blatant racism by Humans. They generally view Ghouls with disdain and most will shoot a Ghoul on sight, since they look like walking corpses. A few communities have taken pity on these irradiated souls, however, and allow them to live on the outskirts of society. They are tolerated for their knowledge of pre-war history and technology and ability to repair items.

Super Mutants, though, are viewed as a dangerous threat to humanity by most, as they seek to "evolve" the Human race into monstrosities. The Super Mutants must be destroyed to preserve Human existence. In a few cases Wasteland towns and caravans have adopted a few defector Super Mutants as military measures against raiders and other Super Mutants.

Humans can be found anywhere, from living as merchants in a town, to coexisting in Human/Ghoul towns, to living in old Vaults or city ruins. Some even live in unopened vaults and/or Enclave bases. The most common human lifestyle is to live in a small wasteland community. They squat in the ruins of civilization, living in houses and still-serviceable buildings, and may have luxuries such as flush toilets and electricity.

Religion continues to serve a fundamental part of post-apocalyptic society, with old-world religions such as Christianity, Mormonism, and the worship of Dharma still existing, alongside new cults and churches like the Children of the Cathedral and Children of the Atom, revolving around the events of Great War of 2077. In addition to religion, quasi-religious organizations also sprouted up, including the Brotherhood of Steel, the Followers of the Apocalypse, and various other faiths revolving everything from ancient Rome and nature to specific animals and even fragments of old-world knowledge.

Human names are the same as OC human names.