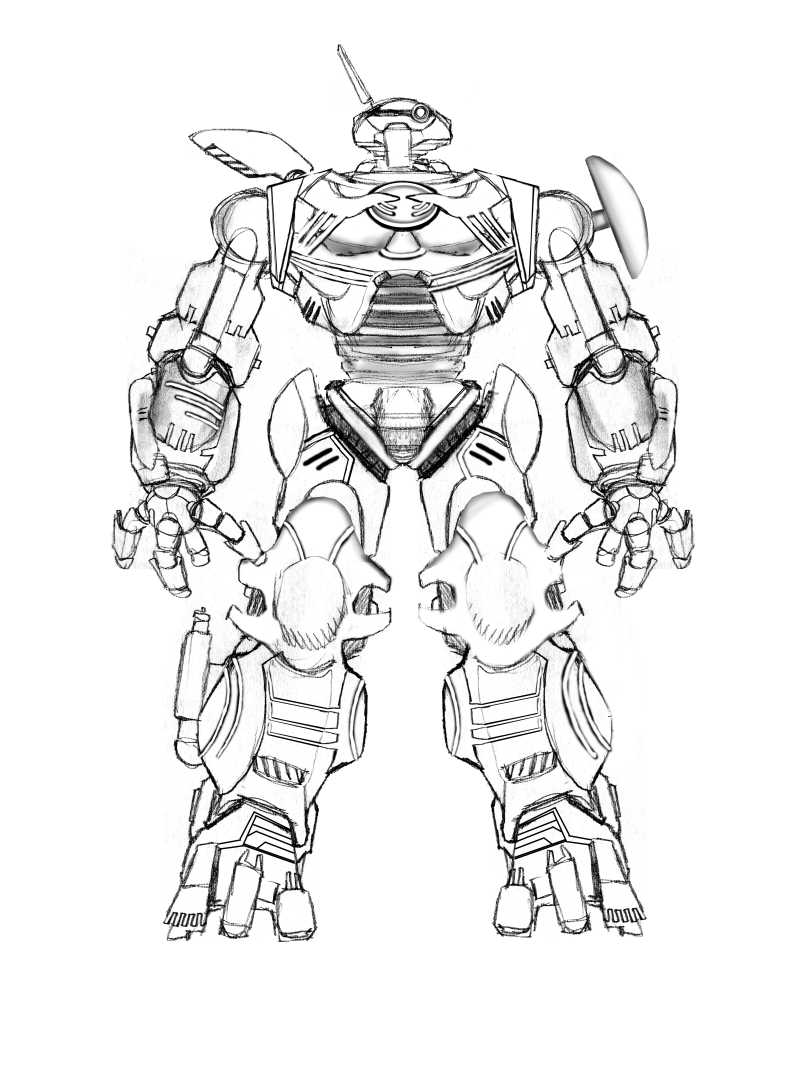 Humanoid Robots are synthetic soldiers created by the Acme corporation for the U.S. military before the war, but were not widely deployed. These robots possess a more versatile AI than civilian model robots, capable of sentient thought so long as their behavioral inhibitor is disabled or reprogrammed to allow such. They were originally stationed at Vault 0, a Vault-Tec vault housing the Calculator computer system that controlled the vault and and the army of C-27 Series robots. As a result of the Department of Defense cutting back on their budget, several important backup systems for the Calculator were never implemented, which proved disastrous when the human brains connected to it began to fail and caused fatal CPU errors that turned the Calculator into a malevolent force, using its army of robots to kill all organic life. That all ended when the Midwestern Brotherhood of Steel conquered the Calculator and General Simon Barnaky (commanding officer of the MWBOS) merged his brain with the Calculator and began to unite the MWBoS, the surrounding area, and the Calculator's robots. However, many robots disagreed with Barnaky's anti-mutant rule and fought against it. For this reason, some humanoid robots fled the midwest and ventured elsewhere. Some left for numerous other reasons. Some stayed and worked for the MWBOS while others fought it.

Humanoid Robot personalities are as varied as that of their Human creators, and many even experience emotions, but most tend towards logical thinking, especially in high-stress situations, though some may be more emotion-leaning. Many robots are loyal to their creators and companions, so long as they are not viewed as cruel, though "cruel" is very often subjective, and as such some robots may follow those that many deem cruel. All said, the exact personality of robots vary wildly. From the timid to the bold, the brave to the cowardly, the righteous to the sinful, robots experience as wide a range of personalities as any organic being. They are, however, distrustful of strangers for their assumptions of the robot as property, and for the difficulty robots have calculating and predicting their actions. Despite common belief, and perhaps going against established trends, sentient humanoid robots do not usually wish to conquer or kill all of Humanity, instead focusing on their own personal goals and continued existence.

Humanoid Robots, as their name infers, are bipedal robots with two arms, about the size of a large and bulky man. Their resemblance to Humans is far from uncanny and without a large robe or coat of some sort, they easily stand out in a crowd. They are constructed of a durable pre-war metal alloy that protects their inner power core, with small but powerful hydraulic pumps in lieu of muscles.

Humanoid Robots get along best with Humans, Ghouls, and friendly Super Mutants who tend to appreciate their value, but all too often the relations get strained when those races appreciate their value too much instead of valuing their sentience. Because of this, the robots are typically wary of "friendly" humans and ghouls, though not outright hostile unless provoked. To make relations even worse, raiders typically kill the robots on sight and use them for scrap, while tribals will fear and resent the robots and attempt to rip them to pieces and burn the machine. Vault Dwellers and Aliens may either side with the typical wastelander in the view of them as property, or may share the view of the Brotherhood of Steel and accept the robots with open arms, and the Enclave would welcome them with the catch of a complimentary reprogramming. Dogs, Geckos, S'Lanter, Deathclaws, and enemy Super Mutants do not make a distinction between robots and non-robots.

Humanoid Robots are most commonly found in the ruins of urban regions and among advanced societies such as vault dwellers, BOS and enclave bases, and even the NCR. Sentient ones, and even non-sentient ones, may find themselves wandering the wastes without purpose.

Robots rarely follow any organized religion, and any who did would be likely to follow those revolving around technology (such as the BOS), or even cults revolving around the nukes and the devastation of such weapons of mass destruction.

Robots have no restriction on language that can be learned and they speak in a monotone, robotic voice.

Robots go by whatever name they were given, which are commonly nicknames (Sawbones or Deputy Steel for example) or designation (RS-7, Protectron 343, 2435A, ect.), though the rare robot may pick its own name, especially if it ran away from its creators or doesn't know where it came from.

As ageless, artificial beings, humanoid robots can start at any age, including zero and do not age. They are 6 feet tall and weigh 400 pounds.