Heavyweight boxers are champions of fame and glory! Very few boxers choose the adventuring lifestyle to combat evil. Most choose to be adventurous for the wealth, or because they just like punching things. These brawlers come from all walks of life, ranging from the savage half-orc, to the feisty halfling. 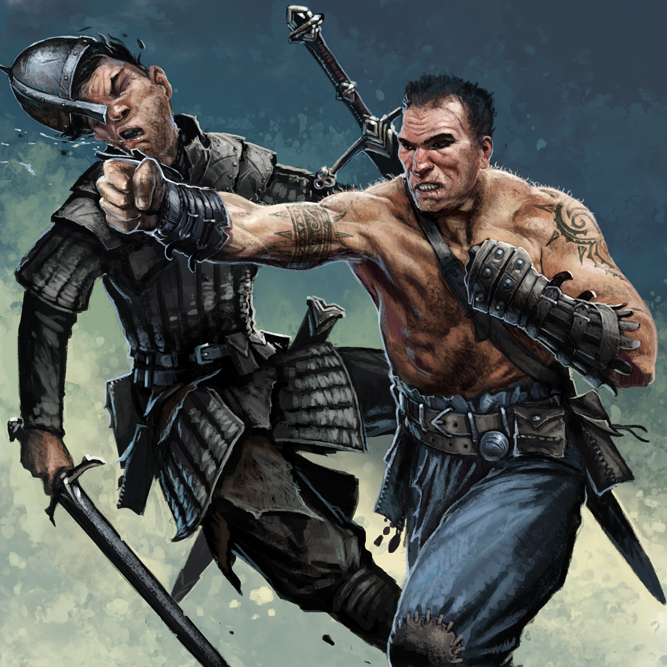 Heavyweight boxers always prove themselves to be the greatest fighters to ever live. Their feet remain firm to the ground, and their fists raised high in the air. They never surrender. Once they are knocked down, they get back up. Surrender is never an option!

What made your character into a prizefighter-turned-adventurer? Did they do it for extra training before a major bout in the ring? Are they doing it to promote themselves for their next fight? Are they trying to regain the money they lost from a fight? Or are they tired of fighting normal opponents, and want a challenge worthy of their skill and status?

As a Heavyweight Boxer you gain the following class features.

While you may not be skilled with swords, your fists offer all the protection you need. Your unarmed strikes deal 1d6 of bludgeoning damage + your Strength modifier. Additionally, while you are not using armor and are not holding a weapon, you may make an extra unarmed strike as a bonus action.

This damage increases as you continue in level

While you are not wearing any armor or/and holding a shield; your Armor Class equals 10 + your Dexterity modifier + your Constitution modifier + half your Strength modifier (rounded down).

At the 2nd level, as a bonus action you may roll a number of hit dice equal to half your heavyweight boxer level, rounded down (minimum 1). You gain temporary hit points equal to the result of your roll. Temporary hit points gained this way cannot exceed 30. Additionally, you regain stamina equal to half of your heavyweight boxer level, rounded down (minimum one). Once you use this feature you must finish a short or long rest before you can use it again.

Starting at 2nd level you gain a pool of stamina equivalent to your heavyweight boxer class level + half your Constitution modifier (rounded down). Stamina can be fully regained after successfully completing a short or long rest. You lose all points of stamina and can't use it if you have 1 or more levels of exhaustion. Stamina can be used to do one or more of the following actions each round:

At the 3rd level, as a bonus action, you may use 1 stamina point to initiate ring combat with any 1 hostile creature you can see. While engaged in ring combat if you are within 20 feet of that creature you gain the following benefits:

Starting at 5th level, when you score a critical hit, the target must make a Constitution saving throw equal to 8 + your Proficiency Bonus + your Strength modifier. On a failed save, the target is stunned for a number of turns equal to your Strength modifier. On a successful save, the target is pushed back 5ft. If the target fails the initial save, it may make another save at the end of each of its turns, and is not pushed back if it succeeds. A creature stunned by this feature is immune to Knockout until the the start of their next turn.

Beginning at 5th level, you can attack twice, instead of once, whenever you take the Attack action on your turn. The number of extra attacks increases to three at 11th level and up to four at 16th level.

Starting at 6th level, your fists count as magical for the purpose of overcoming resistances and immunities to nonmagical attacks.

Starting at the 10th level, the drive of winning compels you to push your body past it's limits, or resort to more unsavory tactics. You can use 4 points of stamina to be under the effect of the haste spell for 1 minute. After the effect ends, you gain 1 level of exhaustion instead of the regular haste penalty. Additionally you can now use stamina to perform the rabbit punch technique.

Rabbit Punch: By using 2 points of stamina, before you roll to hit you may attempt to perform an illegal move to paralyze the target. If you hit your targeted creature with an unarmed strike, it has to make a Constitution saving throw (dc: 8 + your proficiency bonus + your Strength modifier). On a failed save the targeted creature is paralyzed until the end of your next turn. On a success, the targeted creature suffers no effects, other than your normal attack damage.

Starting at the 13th level, you keep on fighting until your last breath and beyond. When your hit points are reduced to 0 you can make a DC 10 Constitution saving throw. On a success you regain 1 hit point plus hit points equal to double your Constitution modifier(minimum 1). Every time you use this feature after the first one the DC is increased by 5, the DC reset to 10 upon completing a long rest.

Starting at the 14th level, you deal double damage to constructs and structures when attacking them with unarmed strikes.

Starting at the 15th level, you are now "in the zone", making your mind incorruptible. As long as you have stamina, you can expend one point as a bonus action from your stamina to end the effects of being frightened or charmed.

Starting at 18th level, you choose once per turn of the following diets to push you beyond normal human limits:

Shining Shake
Adds 1d10 radiant damage to all attacks made with unarmed strikes.

Deadly Drink
Adds 1d10 necrotic damage to all attacks made with unarmed strikes.

Caustic Cider
Adds 1d10 acid damage to all attacks made with unarmed strikes.

Toxic Tequila
Adds 1d10 poison damage to all attacks made with unarmed strikes.

Forceful Cappuccino
Adds 1d10 force damage to all attacks made with unarmed strikes.

There's no question that you are the greatest boxer to have ever lived. At 20th level, you have unmatched endurance and power. Your Strength and Constitution scores increase by 4. Your maximum for those abilities is now 24.

Not all boxers choose the path of fame and wealth. Some choose a life on the streets, while others prefer a life of rugged danger. Starting at the 3rd level, you choose a boxer archetype.

Champion boxers live for fame and glory and are highly respected for their fighting ability. Champions tend toward lawful.

Starting at 3rd level, your training in the ring has allowed you to see critical points easier. You now score a critical on a d20 roll of 19 or 20.

Starting at 3rd level, you have a +1 bonus to your attack rolls with unarmed strikes and you have advantage on saving throws against being frightened.

Champions are never down for the count. Starting at 6th level, whenever you land a critical hit on a creature, or you defeat a creature engaged in ring combat, you regain 1 point of stamina.

Starting at 11th level, your eagerness to fight can give you the upper hand in combat. You have advantage on initiative rolls. Additionally if you are surprised at the beginning of combat, you can act as long as your action is used to attack someone.

You have become a well known legendary boxer. As they say, legends never die. At 17th level, as a bonus action you gain temporary hit points equal to double your heavyweight boxer level. You regain use of this feature after you finish a short or long rest.

Brawlers are savage fighters with primal fury. They tend towards chaotic.

Starting at 3rd level, you deal an extra 1d8 of bludgeoning damage to any attacks you have advantage on.

Starting at 6th level, you can use 2 points of stamina to kick your opponent as an attack. Your opponent takes 2d8 damage on a successful hit and must make a successful Strength saving throw of 8 + your proficiency bonus + your Strength modifier, or be knocked prone if they are Large or smaller.

Starting at 17th level, you may use up to your maximum stamina (min 2) to enter the primal rage mode. While in primal rage you have resistance to all damage, except for force damage. You can't speak, you cannot cast spells and you cannot use items. Your movement speed is doubled and you are forced to attack the closest creature to you. If it happens to be an ally, you must roll a wisdom saving throw DC 15. On a success you may choose another target. If there are two or more creatures at the same range, 1 is selected at random. If no creature can be attacked, you must use your full movement to get close to a target. The effects of this feature last a number of turns equivalent to the amount of stamina used divided by 2, or until you fall unconscious. You may only use this feature once, and regain use of it upon finishing a long rest.

Registering as a Megalo Boxer is the only way to prove your worth in the world of boxing. An annual tournament sees many hopeful competitors from across the globe, but can only crown one champion. Megalo Boxers are more defensive than Champions or Brawlers.

Starting at 3rd level, you are equipped with a gear, and proficient in, Gear. You gain +2 AC. Additionally, you deal an extra 1d4 bludgeoning damage on all attacks. Attacks with Gear are still considered unarmed. Your movement speed decreases by 5ft.

At 3rd level, if you are hit with a melee attack, you may use your reaction to spend two stamina points to return damage equal to that which you should have taken, and reduce the damage dealt to you by a half.

At 6th level, your gear becomes a part of you and cannot be removed by magic. Your movement speed increases by 10ft. You are resistant to being stunned or slowed.

At 6th level, you gain double proficiency in perception. Your passive perception is now 16 unless already higher.

At 11th level, you may choose one of two specially designed gear models.

Spider Gear - You have advantage when attempting to grapple creatures, as well as attempting to climb. Increase your movement speed by 5ft.

Lion Gear - All attacks do an additional 1d6 piercing damage. Add +1 to your Armor Class. Reduce your movement speed by 5ft.

At 17th level, when you successfully land a hit, the target creature must make a Strength saving throw of 10 + your Strength modifier + your proficiency bonus. If they fail, they have achance to be either blinded, deafened, or paralyzed. This feature ignores resistance to bludgeoning damage. You may only use this feature once, until completing a short or long rest.

Prerequisites. To qualify for multiclassing into the heavyweight boxer class, you must meet these prerequisites: Strength, Constitution 13.

Proficiencies. When you multiclass into the heavyweight boxer class, you gain the following proficiencies: improvised weapons.