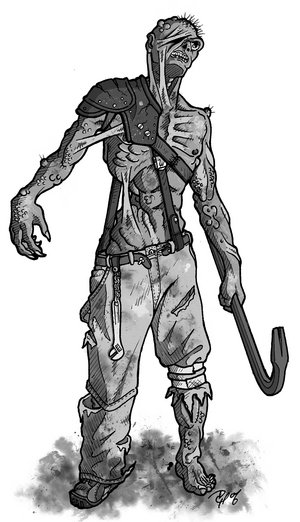 Ghouls or necrotic post-humans are decrepit, rotting, zombie-like mutants. They are victims of heavy radiation poisoning which results in their skin decaying and, paradoxically, greatly extends their individual lifetime. Although they look like a walking corpse, Ghouls are in fact otherwise normal humans who have been exposed to massive amounts of radiation during the Great War and survived against all odds. The name Ghoul comes from the mythological beings that devoured flesh and also resembled Ghouls.

Non-Feral Ghouls tend to act much like normal Humans, though a bit more pessimistic and angry due to their condition.

In physical appearance, a ghoul's flesh is constantly rotting off, appearing very raw and discolored from necrosis. Lips and eyelids are sometimes absent, and noses are in almost every case completely rotted off. Feral ghouls are typically heavily emaciated and hunched over (possibly due to malnutrition and lack of sunlight), while non-ferals typically have a heavier, more human-like build and posture. Another major difference between ferals and non-ferals is dress: while non-ferals dress like normal humans, feral ghouls wear little clothing other than tattered pants or sections of old armor, having lost the mental capacity to mend or replace their clothes long ago.

Most human communities do not tolerate Ghouls, and their terrifying appearance has led many to simply shoot them on sight. This has led them to create communities of their own when possible. Most Ghouls regard normal humans, which they often refer to as “smooth skins,” with suspicion if not outright hostility. They tend to be very pragmatic, having witnessed the destruction of civilization once before, and observe the rise and fall of power groups attempting to take its place from a distance. Ghouls see Feral Ghouls as their "brothers" and the Ferals share that view too, as evidenced by them not attacking Ghouls. Ghouls in general are not hostile to humans, unless humans come a gunning for them. Super Mutants, also, consider the Ghouls to be that of kin and won't attack them (most of the time) unless the ghouls provoke them.

Ghouls attempt to remain in human society, or at least, on the outskirts of human settlements in the Wastelands. They are seen as horrors, however, and are feared in general by humans. This makes their survival a difficult task. Ghouls just seek to live in peaceful, small communities on the outskirts of towns, staying out of most of the affairs of humans. Examples of ghoul settlements are the Underworld, Rockopolis, Necropolis (City of the Dead), Dayglow, and Gecko.

Ghouls worship the same things that Humans do.

Ghouls use the same names as Humans.