A sentient being can be controlled by the parasitic flood and become a combat form when infected by an Infection Form. See this page for background information. 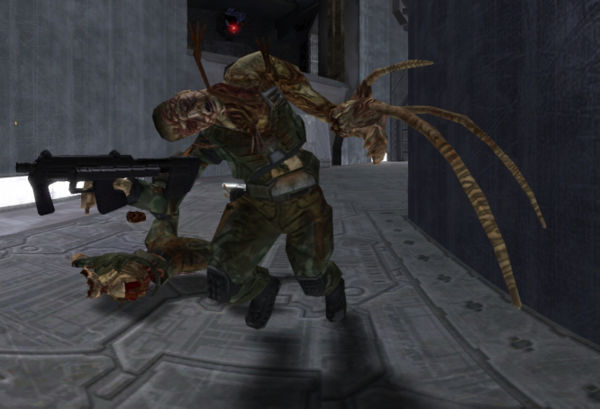 “Flood Combat Form” is a template that can be added to any corporeal creature other than an undead (referred to hereafter as the base creature). It uses all the base creature’s statistics and special abilities except as noted here.

Hit Dice: Drop any Hit Dice gained from experience, double the number of Hit Dice left, and raise them to d12.

Attacks: The combat form retains all the natural attacks and manufactured weapons of the base creature, but loses any weapon proficiency feats. A combat form also gains a slam attack.

For purposes of Strength bonuses to damage, a slam attack is considered a two-handed attack.

Allegiances: A combat form loses any previous allegiances and adopts a new allegiance to the flood and the Gravemind. This allegiance cannot be broken.

Saves: A combat form’s saving throw modifiers are based on Hit Dice and given in Table 8–2: Creature Saves and Base Attack Bonuses.

Action Points: A combat form does not acquire or amass action points. It loses any action points gained by the base creature.

Reputation Bonus: A combat form has a +0 Reputation bonus.

Ability Scores: A combat form’s ability scores change as follows: Str +2, Dex +2, +2 Con. They Lose any Intelligence and Charisma scores they previously had.

Skills: The combat form loses all skills, and has a +20 racial bonus to jump skill checks