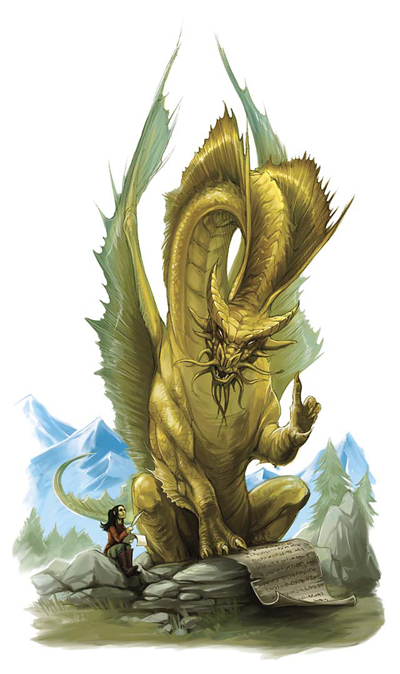 A young human sorcerer training in his studies with the gold dragon, Aruiousies, paladin of pelor.

Some know the ways of the dragons, and some just throw problems at them, making it become confused. Not many people see the true nature of the dragon, for it is only just fear and sorrow when first seeing a dragon die. While that a dragon also shows arcane powers, wisdom, and endless amount of knowledge needed to know about the world. Dragonologist don't care what kind of dragon they study, as long as they get their infomation on dragons, they will work out fine. These people both study the nature of the dragon and want to seek the draconic powers. Trying to earn a dragon's trust and live with the dragon, learning and becoming stronger from the dragon himself.

Humans usually take this prestige class, because humans put a force in their life saying, "Hey, If I try hard enough, I can learn this." Elves and Half-Elves just have a good of a chance of being a dragonologist just as a human has. Gnomes, Halflings, Dwarves, and Half-Orcs are usually uncommon or rare in most campaign worlds.

Weapon and Armor Proficiency: A dragonologist doesn't gain no proficiency with any type of weapon, armor, and shield.

Spells Per Day: At 1st Dragonologist level and every other level after that, the character gains new spells per day (and spells known, if applicable) as if she had also gained a level in a spellcasting class she belonged to before she added the prestige class. She does not, however, gain any other benefit a character of that class would have gained. This essentially means that she adds half their Dragonologist level, rounded up the character has, then determines spells per day, spells known, and caster level accordingly.

Sense Dragon (Su): By taking a quicken minute look at a humaniod or some type of creature, an dragonologist can tell if the humaniod or creature is yet a dragon or just a normal being. When he encounters a dragon using the polymorphed spell into a different form, he may take a Sense Motive check (DC 15 + Dragon's Age category) to find out that this spell is fake, and it is a dragon.

Draconic Lore: As looking throw the draconic powers and wanting to learn something no one never wants to learn. You may take only one of these feats as a bonus feat: Dragon Familiar ((Page 104 Draconomicon)), Dragon Friend ((Only someone Good or Neutral can take this feat)), DragonFoe, and DragonThrall ((You can only take this feat if your Evil or Neutral.))

Hide and Seek: At 3rd level dragonologist, he has a 6th sense that makes him notice dragon blood in some parts of areas. His mind becomes one with the world, letting him pinpoint if a dragon maybe close by. He may spend a full day of research to see how many dragons are within 1 mile per dragonologist level. Though he can't say for sure "Where" the dragon maybe. Only how many are within his knowledge range. Taking a full day of research takes up 100 gp.

Resist Presence: At 4th level dragonologist, you gain a +4 bonus againts fear effects, and you are immune to all Frightful Presence checks made from a dragon.

Greater Draconic Lore (Ex): When taking this ability, you must pick a color dragon and stick with that color dragon, never to change it. If you are Neutral, then you may pick any dragon out of the true dragons you want to. Picking a dragons gives you a speical power.