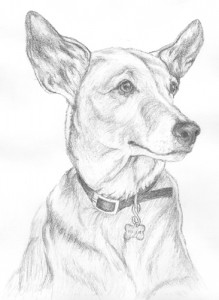 Dogs have stayed generally unaltered by radiation, which is seemingly a miracle. Dogs can run at incredible speeds allowing them to chase down prey. While running, they use their long tails to keep their balance. They are carnivorous, with sharp teeth designed to rip into the flesh of an animal. Their furs are usually a grey color with some white. Though same or hairless and almost Ghoul-looking. Dogs can have all the hair colors of Humans and more.

Domestic Dogs (PCs are assumed to be domestic) are usually loyal to a specific Human or Ghoul. Dogs can be trained to dislike or even be hostile towards certain groups of people, usually depending on who their caretaker is enemies with. They are natural with Deathclaws, whom they fear and fight for land over. They are almost never found with Super Mutants except for rogue Super Mutants who have decided to take a Dog in as a companion.

Feral Dogs can be found all across the wastelands, but usually in ruined cities. Domestic Dogs live in Human settlements

Dogs speak Dog and can be trained to recognize other language. But Dogs can only speak Dog unless some sort of electronic translator is involved.