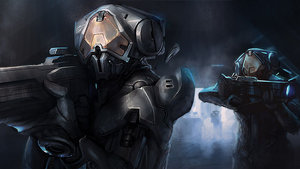 Combat skins are a type of body armor used by Forerunner combat personnel. The Forerunners had a classification system for combat skins, running from Class 1 to Class 18, and possibly above. According to 343 Guilty Spark, the human MJOLNIR Mark V is ranked on this scale as equal to a Class 2. Combat skins were typically worn by Warrior-Servants, the rate tasked with warfare, but could be used by the dedicated military or security forces of the other the rates as well, such as Builder Security, the security force of the Builder rate. After the Flood threat intensified to critical levels, even civilians were forced to wear combat skins in high-risk areas. It possesses a Motion Tracker. Combat Skin grants a character +12 Strength, a +8 bonus to his/her Dexterity score and increases his speed by 30ft. Combat Skin includes several gadgets from both the core/future and future tech rule books.

Integrated Weapon- Constraint Field(Counts as Telekinesis,caster level 15,but can be used at will, has a max range of 50ft,is negated with a reflex save,and the user uses his dexterity score for violent thrusts,can lift objects weighing up to 3,000lbs,and counts as nonmagical)