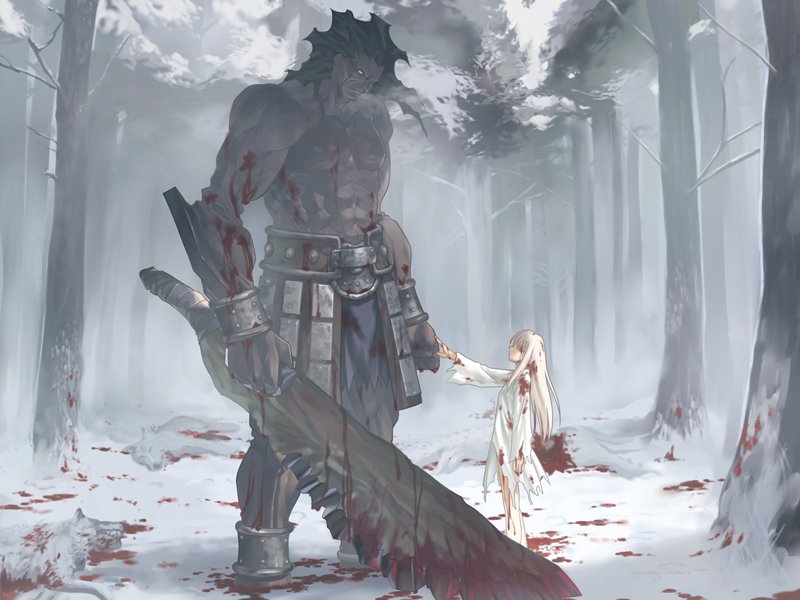 A blood defender and his principle; art by Tekeuchi Takashi.

<-fluff about this prestige class->

Blood Defenders are those who go farther then their brethren and create a bond between themselves and a friend, and will protect that friend at all costs.

Blood Rage: If the Blood Defender is within visual range of the Blood Friend, and the Blood Friend is seriously wounded (down to 10% of maximum Hit Points), the Blood Defender must fly into a rage (no save) that grants a +10 bonus to Strength, a + 10 bonus to Constitution, and a -6 penalty to Armor Class. The increase in Constitution increases the Blood Defender’s hit points by 5 points per character level, but these hit points go away at the end of the rage when his Constitution score drops back to normal. (These extra hit points are not lost first the way temporary hit points are.) During the rage, the vial of blood for that particular person glows dark red and both are immune to mind affecting spells, as Mind Blank. When their is no more immediate danger, or 10 rounds have passed, the rage ends and he Blood Defender takes non-lethal damage equal to his current Hit Points, putting him unconscious.

Tireless Rage (Sp): After reaching 3rd level, a Blood Defender only becomes fatigued after using his Blood Rages, excluding his last use of the day.

If a Blood Defender is unable to save their last Blood Friend from death, they take a -10 morale penalty to all saves for one week, and lose all class skills and abilities. They may regain them if they forge another bond with another person, going through the same procedure as before.

If a Blood Defender becomes lawful, or their Intelligence goes above 15, he loses the ability to rage and cannot gain more levels as a Blood Defender. He retains all the other benefits of the class.

Advancement: <-Typical advancement options for characters with this class. Include desirable multiclass options->

Resources: Whatever the person bodyguarding them has under their control.

Blood Defenders in the World[edit]

Blood Defenders typically find employment as bodyguards for important persons, due to their near-blind devotion to them and their inability to consider much more.

NPC Reactions: Blood Defenders are usually not noticed, due to the august nature of their company.