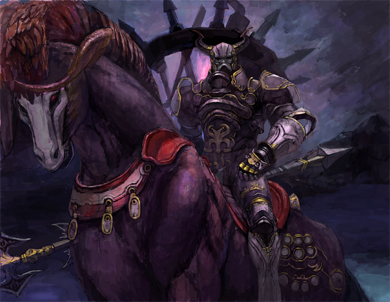 All of the following are Class Features of the blackguard prestige class.

Weapon and Armor Proficiency: Blackguards are proficient with all simple and martial weapons, with all types of armor, and with shields.

Spellcasting: At each 2 level after first, you gain new spells per day and an increase in caster level (and spells known, if applicable) as if you had also gained a level in a spellcasting class to which you belonged before adding the prestige class level. You do not, however, gain any other benefit a character of that class would have gained. If you had more than one spellcasting class before becoming a Blackguard, you must decide to which class to add each level for the purpose of determining spells per day, caster level, and spells known.

Aura of Evil (Ex): The power of a blackguard’s aura of evil (see the detect evil spell) is equal to his class level plus his cleric level, if any.

Detect Good (Sp): At will, a blackguard can use detect good as a spell-like ability, duplicating the effect of the detect good spell.

Command Undead (Su): When a blackguard reaches 3rd level, he gains the supernatural ability to command and rebuke undead. He commands undead as would a cleric of two levels lower.

Corrupt Weapon (Su): Blackguards have access to a special spell, corrupt weapon, which is the opposing counterpart of the paladin spell bless weapon. Instead of improving a weapon’s effectiveness against evil foes corrupt weapon makes a weapon more effective against good foes. He add this spell to his level 2 spell list no matter the the class.

Dark Blessing (Su): A blackguard applies his Charisma modifier (if positive) as a bonus on all saving throws.

Smite Good (Su): Once a day, a blackguard of 2nd level or higher may attempt to smite good with one normal melee attack.

He adds his Charisma modifier (if positive) to his attack roll and deals 1 extra point of damage per class level. If a blackguard accidentally smites a creature that is not good, the smite has no effect but it is still used up for that day.

At 5th level, and again at 10th level, a blackguard may smite good one additional time per day.

Sneak Attack: This ability, gained at 4th level, is like the rogue ability of the same name. The extra damage increases by +1d6 every four level beyond 4th (8th and 12th). If a blackguard gets a sneak attack bonus from another source the bonuses on damage stack.

The epic Blackguard gains a bonus feat (selected from the list of epic blackguard feats) every 3 levels after lvl 10.

Upon or after reaching 2th level, a blackguard can call a fiendish bat, cat, dire rat, horse, pony, raven, or toad to serve him. The blackguard’s servant further gains HD and special abilities based on the blackguard’s character level (see the table below).

A blackguard may have only one fiendish servant at a time.

Should the blackguard’s servant die, he may call for another one after a year and a day. The new fiendish servant has all the accumulated abilities due a servant of the blackguard’s current level.

Character Level: The character level of the blackguard (his blackguard level plus his original class level).

Bonus HD: Extra eight-sided (d8) Hit Dice, each of which gains a Constitution modifier, as normal. Extra Hit Dice improve the servant’s base attack and base save bonuses, as normal.

Natural Armor Adj.: This is an improvement to the servant’s existing natural armor bonus.

Str Adj.: Add this figure to the servant’s Strength score.

Int: The servant’s Intelligence score. (A fiendish servant is smarter than normal animals of its kind.)

The abilities mentioned in the “Special” column of the accompanying table are described below.

Empathic Link (Su): The blackguard has an empathic link with his servant out to a distance of up to 1 mile. The blackguard cannot see through the servant’s eyes, but they can communicate empathically. Because of the limited nature of the link, only general emotional content can be communicated.

Share Saving Throws: For each of its saving throws, the servant uses either its own base save bonus or the blackguard’s, whichever is higher. The servant applies its own ability modifiers to saves, and it doesn’t share any other bonuses on saves that the blackguard might have.

Share Spells: At the blackguard’s option, he may have any spell (but not any spell-like ability) he casts on himself also affect his servant. The servant must be within 5 feet at the time of casting to receive the benefit. If the spell has a duration other than instantaneous, it stops affecting the servant if it moves farther than 5 feet away and will not affect the servant again even if the servant returns to the blackguard before the duration expires. Additionally, the blackguard may cast a spell with a target of “You” on his servant (as a touch range spell) instead of on himself. A blackguard and his servant can share spells even if the spells normally do not affect creatures of the servant’s type (magical beast).

Speak with Blackguard (Ex): If the blackguard’s character level is 13th or higher, the blackguard and servant can communicate verbally as if they were using a common language. Other creatures do not understand the communication without magical help.

Blood Bond (Ex): If the blackguard’s character level is 16th or higher, the servant gains a +2 bonus on all attack rolls, checks, and saves if it witnesses the blackguard being threatened or harmed.

This bonus lasts as long as the threat is immediate and apparent.