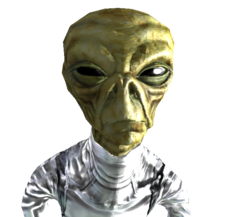 Aliens are an extraterrestrial race from an unknown planet. The only thing known about them is that they use their ability to travel space to probe other planets and species for information. It is not known from what system or what planet they come. They have orbited and observed the Earth since the 1600s, if not earlier, but humans had little real awareness of them, and less evidence of their existence. Before the 1960s, many groups such believed in them, thinking that aliens existed but that evidence of their existence was covered up by a government conspiracy. A fact which later came to be true.

Aliens appear to have some degree of emotion, displaying obvious fear when confronted with armed assailants. In addition, Aliens have an unusual fascination with Giddyup Buttercup, a pre-war toy manufactured by Wilson Automatoys.

Aliens are diminutive, hairless, yellowish-green-skinned humanoids with short, wiry limbs and green blood. Their heads are disproportionately large, with round, heavy-lidded, solid black eyeballs with no discernible iris or pupil; a thin, toothless mouth with green tongue, and two pairs of small holes where ears and nostrils would be. Aliens have no opposable thumbs, each hand instead having three long, tentacle-like fingers with large suction cups at each fingertip that allow them to manipulate objects. They breathe a similar atmosphere to humans, and subsist mainly on a diet of strange, alien worms and squid.

They view other species as laboratory animals, worthy of preservation and storage at best and vivisection and experimentation at worst. This, coupled with their alien nature, makes most wastelanders hostile to them, though many would just as surely run away, and groups such as the BOS, Enclave, and even NCR would go to any lengths to capture such a being alive.

The Alien homeworld is unknown, though they are known to inhabit starships, of which the architecture is spartan and purely functional, their stasis chambers nothing but a sterile metal capsule with no mattress, blankets, sheets, or other pieces of bedclothes typically found in a normal human bed. Aliens seem to have a strict society focused on work and progress, with no apparent concern for hobbies and personal pursuits. Aliens are incredibly advanced in their various technological fields, capable of spaceflight and technological feats equal to, and often beyond, that of even the most advanced human pre-War technology. They also possess technologies such as long-term cryostasis, powerful rayguns, genetic manipulation, teleportation and holograms.

Aliens possess no concept of religion in their culture, but their total dependence on technology could be construed as a worship of it.

Aliens speak in their own language of high-pitched screeches and wails. As such, communication between humans and aliens is highly difficult, though it has been proven possible, though aliens themselves are not very much into discussion.

Aliens lack proper names, instead going by designations and rank.