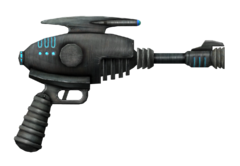 Successful critical hits that reduce an enemy to 0 HP or below will reduce the enemy to a pile of blue ash, but all armor, weapons, and equipment on the body remain undamaged.