Aerindor is the ancient elven forest kingdom that predates the arrival of the other races to Aerinthia. The kingdom is ruled by the Stag King, from the ancient stronghold of the Oaken Tower. King Avoreem Goldleaf has been the Stag King for over three and a half centuries. 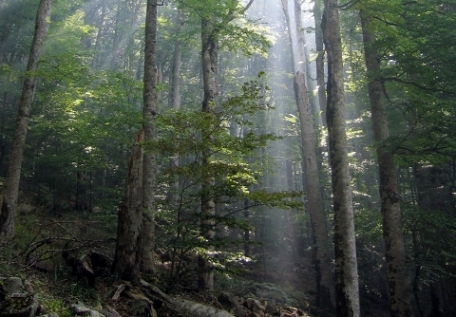 The forests that make up Aerindor is filled with with trees over twenty five hundred years old. The forest consists of White Beech, Maple, Ash, Silver Fir, Redwood, Giant Redwood, and White and Red Oaks. The live trees in the forest have not seen a woodcutters axe in over five hundred years, but the Stag King has appointed wardens to look over each part of the forest to ensure that dead wood and debris are cleared to prevent the spread of fires.

Trails and pathways are cleared through the forest so that any decent pathfinder can navigate through the forest and do as little damage as possible. Simple traveler's campsites are set up along major pathways to provide a means for travelers to rest and seek shelter without causing undo harm to the forest. While, natural dangers (such as cliffs and ravines) are marked, as well as river crossings.

In all matters of determining who will sit upon the throne, guidance has been received from Arbeorn and any who have attempted to seize the throne by force or treachery have been condemened by the will of Arbeorn to ashes.

Twice through the ages the Stag Throne has remained vacant because of a lack of male heirs and the Rose Queen ruled as regent until one of her children gave birth to a male heir.

Once through the ages the male heir was found unfit by Arbeorn and his sister sat upon the Stag Throne, however she kept the masculine title and was called "Stag King, Lady Calandria Goldleaf".

This settlement of almost fifteen thousand rests at the very heart of Aerindor. The Stronghold of Oaken Tower and the throne of the Stag King mark the very center of the forest. From here the presence of the king and the overwhelming sense of timelessness coexists with the hustle of thousands of courtiers, merchants, and citizens as they work to keep the last bastion of an elven heritage alive and maintain a thriving economy going without harming the forest that all Aerynns depend upon.

This settlement of almost ten thousand is renown throughout Aerindor for it's hospitality to the lesser races of Aerinthia. More then half of the non-elves that live within the kingdom reside in Valenhaven. The settlement lays directly west of Oakenhall a short thirty miles from the border. A sizable portion of the city deals in the trade of natural goods like; Aged lumber, Maple syrups, furniture, and many other wood crafts. The settlement is governed by a major who rules at the whim of the Stag King and two councilors appointed by the citizens of Valenhaven. For the past four decades the each appointed counselor has also been a member of one of the two major guilds.

This settlement of roughly twenty five hundred rests in southern Aerindor roughly forty miles from the southern border and thirty miles inland from the sea along the Farrow River. Two dozen small pig farms are lay at the outskirts of the settlement, where wild boar have been tamed and raised for generations. The residents of Rosenfarrow make a decent living in all manner of trade with the villages along the southern border of Aerindor, but they known for making the best pork sausage in all of Aerinthia.

Although raising pigs many seem a simple task far beneath most elves, the people of Rosenfarrow take pride in their livestock beyond any other people.

In the center of Rosenfarrow rest the Rose Tower, home of Avanthia the Rose witch.

The people of Aerindor and the Stag King remain cautious about making alliances, trade agreements, and such with other nations since the people of Aerindor will most likely outlive their neighbors and alliances made with one ruler, may suddenly no longer apply when their descendants take the throne. The Stag King is especially wary of the Meadowlands, which lacks a true ruler and instead is led by a council of elders and their appointed king, each of who may change at the whim of the people.

Regardless Aerindor maintains emissaries with most of its neighbors and although it is not currently attacking Shadar or its allies, Aerindor remains on constant watch for movement from the dark armies, to include actively spying on those kingdoms.

No or limited contact[edit]

During the Second Age, Arbeorn, God of Air, Lord of Light, and Creator of the Elves gathered his creations from Thronin's Forge and brought them to a massive continent covered with every kind of tree imaginable. The forest canopy rested near the clouds and the elves were taught that this would be their home on Neveril. Arbeorn called the forest simply "The Vast" and told his people that the forest was his gift to them and that it reached from the western shore of the land across the vast expanse to the eastern shore, and north to the cold evergreen forests and south to tropical jungles.

Thus was their playground, their paradise given to them and in elven they call "The Vast", Aerindor.

As the Third Age began, Arbeorn, told his people that although he could walk among them in mortal form, somethings might change, because of the actions of other gods. Arbeorn told his people that he would protect them from harm, but that it was time for the world to change and they must change as the with it. Some of Arbeorn's people chose to keep to the old traditions and retreated to the Feywild. These people embraced their fey origins and once again became the Eladrin, while those who remained in Aerindor continued as elves.

At the end of the Third Age, there arose a great leader among the elves and the people declared him their Stag King, his name Talethrieum Goldleaf. He is said to have departed for the halls of the Seelie Court just before he died and so lives to this day among the fey.

The Fourth Age, the time of dragons barely touched Aerindor, but at this time, the All-Father Thronin's people arrived on the shores of Aerindor seeking sanctuary from the dragons. The Stag King granted their request and gifted them with the land beneath the forested Iron Mountains that crossed the middle of Aerindor.

In the midst of the Fourth Age the climate change across Aerindor. The south became hotter and dryer and many trees died as sands covered the landscape, while the north grew cold as ice took hold the trees froze, shattered and rested beneath layers of ice.

Late in the Fourth Age the humans arrived on the western shores of Aerindor. At first the elves avoided the humans, but then the humans began to cut down the trees to build their settlements and massive farmlands. More and more humans arrived and with each new wave of humans more forest was destroyed. The Elves of the west attacked the humans, but they were too few to truly matter and in the end the elves of the west retreated across the Iron Mountains.

The Fifth Age brought the Empire of Light, Shadar, the invasion of the dark armies, and the great fire which scarred eastern Aerindor and reduced it to its current borders, while clearing the way for the Meadowlands and Stormguard.

The elves continued to retreat from all enemies, massive numbers of the elves even sought refuge in the Seelie Court, while a few harbored ill will towards the peoples responsible for the destruction of "The Vast forests of Aerindor", which the humans renamed Aerinthia have joined the Unseelie Court.

The sixth Age has found the elves carefully guarding the last remaining forests on Aerinthia and cautiously dealing with the outsiders who have stolen their gift from Arbeorn.

Scion of the Forest Enclave

Special Note: Eladrin, Elves, and Half-elves gain an additional language of their choice when selecting an Aerindor background since they already speak Elven.