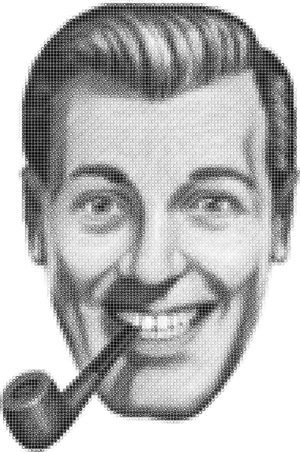 The portrait of J.R. "Bob" Dobbs

Born as a son of Xinucha-Chi-Xan M. Dobbs and Jane McBride Dobbs, J.R. "Bob" Dobbs has shown an exceptional talent of making a fortune with tele-stock marketing since he was a child. In 1953, "Bob" saw a vision of God on a handmade television set, which inspired him to write the "PreScripture" and later found the Church of the SubGenius.

"Bob" is the High Epopt and Living Slack Master, the living embodiment of "Slack". "Bob's" name must be written with quotation marks, no matter what.

Ever since the emergence of humanity on the surface of Earth, extraterrestrial beings have been watching on this pale blue dot in the universe. They have been manipulating those puny, hairless apes who pride themselves as "the most sentinent being on earth", into their servitude. All civilizations, cultures, politics, and even religions are little more than a great big lie created by the alien entities in order to enslave the humanity.

This is the big one. So big, that only "Bob" is qualified to fully understand, appreciate, and embody. Whatever "Slack" is, the conspiracy wants it barred from pinks. "Slack" is the key to break the chain of the conspiracy, the key that opens the door to free and comfy life. No more hard works, no more responsibility - with "Slack", it's just you and me, all alone, living the life as "Slack" guides.