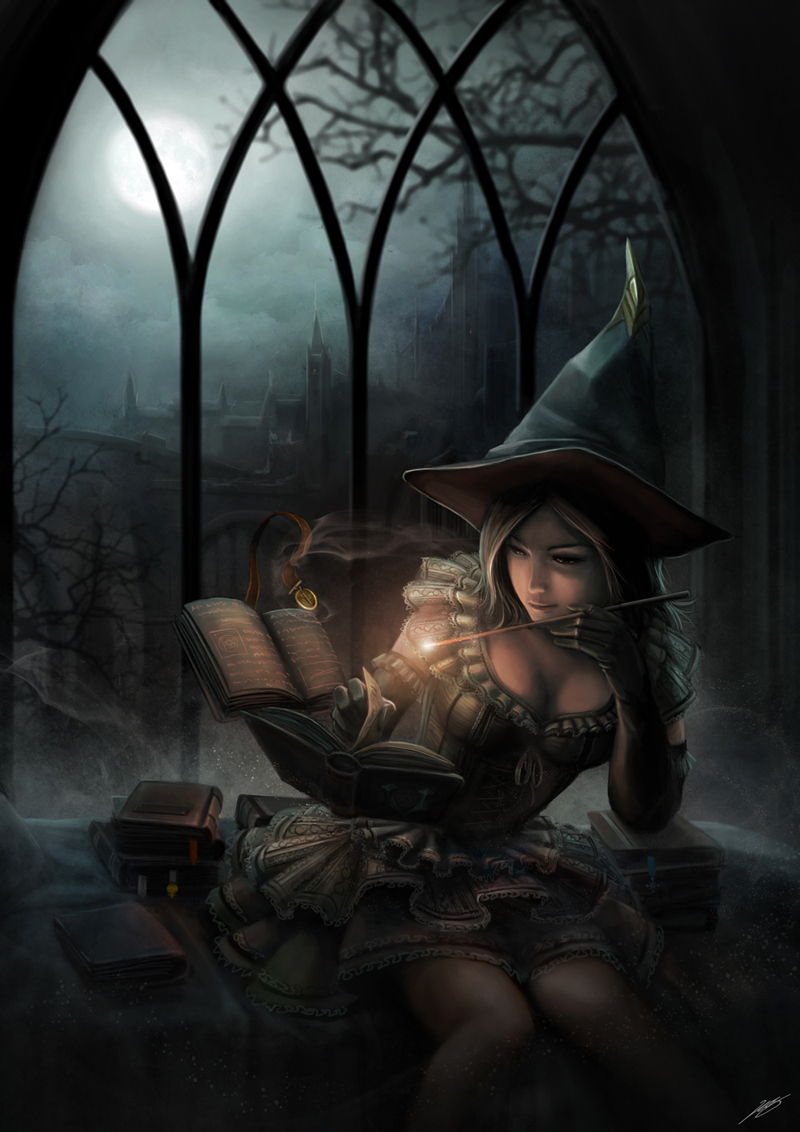 A witch studying her magic by wandlight.

Female deities tend to confer power to certain chosen ones (often females) in addition to their clerics. While clerics spread the word of the deity, witches take action on it. Goddesses choose individuals who already possess special powers of their own, and encourage them to use them for their cause; this often means entire generations chosen to be witches. Unlike clerics, witches may be of any alignment as long as they follow their deity’s dogma. Witches receive their spells and powers not only from their deity, they also bend the elements and energies of the universe (such as the four elements and the alignments), witches worship two overdeities in addition to their Goddess, these are Gaea (or the cosmic mother), and the Horned God (or the cosmic father), they represent to the witch life and death and its constant cycle; as overdeities, these Gods do not grant spells or other powers to the witch, nor are concerned about other mortal affairs.

Although witches tend to be female, gender is not a real factor, and male witches, while rare, do exist. Contrary to popular belief, warlock is not the masculine form of witch. Witches, whether male or female, are referred to as witches. Warlocks are described in Complete Arcane.

To become a witch, a character must fulfill the following criteria.

Special: The witch must worship a female deity.

All of the following are class features of the witch prestige class.

Spells per Day/Spells Known: At every even witch level gained, the character gains new spells per day (and spells known, if applicable) as if she had also gained a level in a spellcasting class she belonged to before she added the prestige class. She does not, however, gain any other benefit a character of that class would have gained. If a character had more than one spellcasting class before she became a witch, she must decide to which class she adds each level of witch for the purpose of determining spells per day.

Witchcraft: A witch’s effective caster level is equal to her witch level plus any caster level she might already have. However, a witch's caster level can never exceed her Hit Dice.

Divine Spells: From 2nd level on, a witch may write spells from the cleric and druid list on her Book of Shadows. When gaining a level the witch may choose spells from these list to learn in place of the wizard list ones. She may also add spells to her book through the way wizards copy scrolls into thier books. She must however prepare and cast these spells as arcane spells.

Extra Domain: At 3rd and 6th level, a witch chooses one of the domains assossiated with her deity. The witch gains the granted power and spell access of the chosen domain. For an explanation of how nonclerics receive domains spells, refer to the Complete Divine.

Bonus Feats: At 4th and 8th level, a witch gains a bonus feat. This feat must be a Metamagic feat.

Hexagram: At 7th level, the witch can cast special versions of the magic circle spells, which affects the fire, water, earth, and air creature subtypes instead of alignments, she may also cast magic circle spells focused against positive or negative energy. This spells work like their aligned counterparts except that if cast outward, creatures within the area gain the effects of a resist energy spell of the appropriate energy type. If focused against negative energy, creatures inside the circle gain the benefits of death ward spell; while if focused against positive energy, the creatures are subject to positive energy protection (see the Manual of the Planes).

Improved Divination: At 9th level, a witch gains a +1 bonus to the DC of all saving throws against divination spells she casts. This bonus stacks with the feats Spell Focus and Greater Spell Focus.