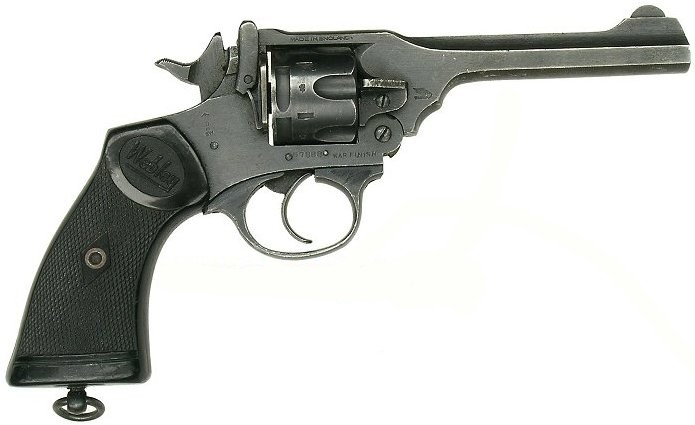 The Webley Revolver (also known as the Webley Break-Top Revolver or Webley Self-Extracting Revolver) was, in various marks, the standard issue service pistol for the armed forces of the United Kingdom, the British Empire, and the Commonwealth from 1887 until 1963.

The Webley is a top-break revolver with automatic extraction. That is, breaking the revolver open for reloading also operates the extractor. This removes the spent cartridges from the cylinder. The Webley Mk I service revolver was adopted in 1887. A later version, the Mk IV, rose to prominence during the Boer War of 1899–1902. However, the Mk VI, introduced in 1915 during the First World War, is perhaps the best-known model.

Firing the large .455 Webley cartridge, Webley service revolvers are among the most powerful top-break revolvers ever produced. Although the .455 calibre Webley is no longer in military service, the .38/200 Webley Mk IV variant is still in use as a police sidearm in a number of countries.

At the end of the First World War, the British military decided that the .455 calibre gun and cartridge was too large for modern military use and—after numerous tests and extensive trials—that a pistol in .38 calibre firing a 200-grain (13 g) bullet would be just as effective as the .455 for stopping an enemy. Webley & Scott immediately tendered the .38/200 calibre Webley Mk IV revolver, which as well as being nearly identical in appearance to the .455 calibre Mk VI revolver (albeit scaled down for the smaller cartridge), was based on their .38 calibre Webley Mk III pistol, designed for the police and civilian markets. Much to their surprise, the British Government took the design to the Royal Small Arms Factory at Enfield Lock, which came up with a revolver that was externally very similar looking to the .38/200 calibre Webley Mk IV, but was internally different enough that no parts from the Webley could be used in the Enfield and vice-versa. The Enfield-designed pistol was quickly accepted under the designation Revolver, No. 2 Mk I, and was adopted in 1932, followed in 1938 by the Mk I* (spurless hammer, double action only), and finally the Mk I** (simplified for wartime production) in 1942.

Webley & Scott sued the British Government over the incident, claiming £2250 as "costs involved in the research and design" of the revolver. This was contested by RSAF Enfield, which quite firmly stated that the Enfield No. 2 Mk I was designed by Captain Boys (the Assistant Superintendent of Design, later of Boys Anti-Tank Rifle fame) with assistance from Webley & Scott, and not the other way around. Accordingly, their claim was denied. By way of compensation, the Royal Commission on Awards to Inventors eventually awarded Webley & Scott £1250 for their work.

RSAF Enfield proved unable to manufacture enough No. 2 revolvers to meet the military's wartime demands, and as a result Webley's Mk IV was also adopted as a standard sidearm for the British Army.