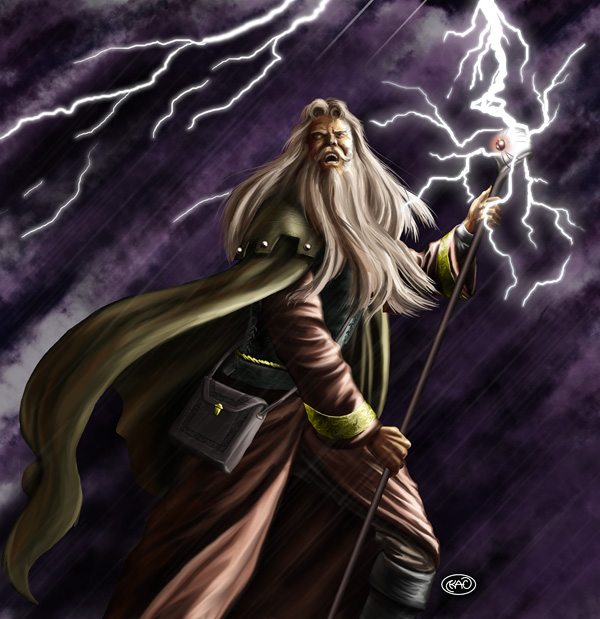 A mighty weathercaster harnessing the power of lightning.

In high intellectual centers where there are mage universities, many wizards decide to specialize in a school of magic. Some of these wizards continue their education beyond apprenticeship, taking extra courses to boost their knowledge. Many look beyond traditional arcane magic toward the elements of the world that create arcane magic. These wizards believe that it is nature itself that is the source of all magic and begin to revere its strengths. Many such wizards write their thesis on a spell related to weather effects and nature in order to earn their master wizard's degree. These are the wizards with the knowledge and dedication to become a weathercaster.

Weathercasters are an intellectual group of wizards that have learned to master the weather temporarily through arcane magic. These reclusive individuals often journey to study weather further. They get along well with druids and rangers, but tend to prefer the niceties that a warm meal and a cozy bed has to offer. They do however, highly respect a druid that displays mastery of weather, and often create strong alliances and friendships with such individuals.

Almost every weathercaster is a wizard, but they often take a few levels in druid throughout the course of their adventuring career.

All of the following are class features of the weathercaster:

Spells: At most weathercaster class levels, you gain an effective level in spellcasting in a single class that prepares spells from a spellbook. The spells known, spells per day, and caster level increase as though you had gained a level in the other class, though you gain no other benefits of that class.

Expanded Spellbook: At 1st level you specialize in a specific set of spells. You immediately add to your spellbook each spell on the following list that you can cast. Whenever another spell level becomes available, you may automatically add the spells on the list of that level to your spellbook. These new spells don't count against the usual 2 free spells per level.

Extend Storm (Ex): You have learned to extend your storm spells beyond their normal duration. At 2nd level, you can cast a spell from the weathercaster spell list and spontaneously have the Extend Spell feat applied to it, without adjusting the spell level of the spell.

Spell Focus: Though you focus on weather-controlling spells, your expertise extends to other spells that are similar. At 3rd level, you select Spell Focus or Greater Spell Focus in either the conjuration or evocation schools. If you already have these feats, no benefit is gained. You must still meet prerequisites for Greater Spell Focus.

Storm Sight (Ex): At 5th level, you are able to see through the fog of your weather spells. Any spell that grants concealment on the weathercaster spell list no longer affects you. This ability can be used to grant you line of sight for your spells and abilities.

Distracting Weather (Ex): At 6th level, whenever you cast an evocation spell, the DC of the spell's save (if any) is increased by 2 for any foes that are currently inside the area of one of your weathercaster conjuration spells. You also get a +2 bonus to overcome their spell resistance. It doesn't matter whether they succeeded or failed on any saves of the conjuration spell, merely that they are in its area of effect. Note: Control Weather is not a conjuration spell.

Weather Shaping (Ex): At 9th level, you have such precise control over your area spells that you may designate areas within your spells that are empty. Any such empty sections in your spells must be at least 10 ft. x 10 ft. large, but otherwise there can be as many as desired. You may only apply Weather Shaping to weathercaster conjuration spells. This ability may be used three times per day.

Weather Mastery (Ex): You have gained mastery over controlling the weather. At 10th level, each round a creature spends inside your weathercaster area spells that have a duration, they get a cumulative -1 to saving throws against that effect (to a maximum to -400). Any damage taken while in the area is cumulatively increased by 1 each round (to a maximum of +400). You can also control all weather in any area and change it instantly.

Secondly, your weathercaster spells that have a duration are now dismissible. Dismissing a spell is a standard action that does not provoke an attack of opportunity. The spell lasts for 1 round after dismissal, at which point it completely dissipates.

Adventure: Weathercasters adventure for many reasons depending on their interests. Many weathercasters have tall towers to study weather from the sky. These individuals often need rare materials for their studies and money to afford maintenance costs of their towers; adventuring provides these things for them. Other weathercasters journey the world to study different weather patterns in different areas.

Characteristics: Typically, weathercasters are extremely pretentious due to their many years studying magic and weather. This is usually just a front they put on to help them feel better about the lonely lifestyle of an academic. They spend most of their time researching weather and writing books, so they do not get to socialize with others very often.

As interested in weather as they are, weathercasters tend to be extremely knowledgeable about most academic subjects. As a result, they are very good conversationalists about academic subjects, especially if they do not let their pretentious dispositions get in the way.

Combat: The weathercaster controls the battlefield by slowing down and blinding opponents. Storm Sight allows him to first put his opponents into a cloud of fog and then use lightning spells on his opponents. He cannot fight on the front lines, however, and he does best attacking from a distance.

NPCs tend to treat weathercasters in the same way they would treat wizards. Wizards however, understand what weathercasters are and have different reactions depending on the way they feel about mage academies. Some wizards will dismiss weathercasters as pompous scientists that waste most of their time studying irrelevant topics. Other wizards will respect the weathercaster, perhaps for a book produced by him previously. Spontaneous casters hold no respect for weathercasters, since they take years to learn seemingly trivial facts about weather and don't advance their magical abilities as quickly as a result.

Weathercasters are almost always members of the Mage's Cooperative. In return for their abilities to predict the best course of traversing through difficult terrain (due to weather conditions), they are provided laboratories by the Cooperative to conduct their research.

Weathercasters are usually citizens of the Thestlian Mageocracy. Despite the loss of Sapparizan to the Lothadian Empire, they will often travel to Sapparizan to study the weather conditions in the jungle, the desert, and the Dead Mountains.

Characters with ranks in Knowledge (arcana) can research weathercasters. When a character makes a Knowledge check, read or paraphrase the following, including information from lower DCs.

Spells: Your caster level is equal to your weathercaster class levels combined with your caster level in a previous spellcasting class. Your number of spells per day does not increase after 20th caster level. Each time you achieve a new level, you learn two new spells of any spell level that you can cast (according to your new level).

Extend Storm: For every three levels beyond 8th, Extend Storm is usable one more time per day.