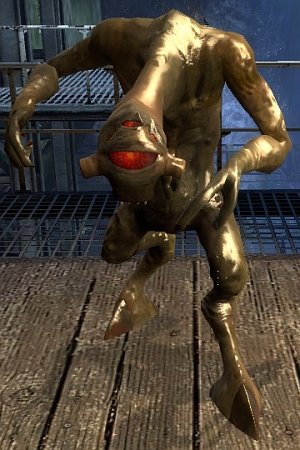 Vortigaunts are hive-minded creatures that have recently freed themselves from complete oppression by the creature known as Nihilanth. Unused to strong levels of individualism, they enunciate individuals (such as humans), by adding 'the' to their name. In appearance, a Vortigaunt is somewhat humanoid with two legs and two arms, but has an additional arm protruding from its chest. This extra limb is a feature also found in the other bipedal, sapient species from Xen, including the Alien Grunt and Nihilanth. This similarity, along with other shared features such as red eyes and back-jointed legs, is strongly suggestive of a common ancestry with other intelligent Xen lifeforms. Apparently, this third arm is used for feeding, as both Vortigaunts and Alien Grunts are often seen bending over slain victims while feeding off of it. Vortigaunts have a mottled green-brown skin, sharp teeth, and clawed hands. Vortigaunts have a slightly hunched posture, and their faces are dominated by a large, single red eye, surrounded by three smaller eyes. They stand roughly 5 and a half feet tall and weigh around 150 pounds.

Vortigaunts are powerful warriors in combat, using their potent 'vortal energies' for offense before closing in to melee range. They are usually unarmored save for their own tough skins, as any sort of physical protection that interferes with their thoracic limb results in loss of their vortal charge attacks.

Higher Vortessence Manipulation (Su): By completely immersing themselves within the Vortessence, the Vortigaunts are able of much greater feats. In this state, the color of their bodies turns into a highly luminescent blue. It is said that in this state, their telepathy no longer has limitations in the form of distance or even extradimensional barriers, and it allows them full access to the combined knowledge of the Vortigaunt race. This state of manipulation can only be unlocked if all Vortigaunts involved succeed in making simultaneous Concentation checks of DC 30. Certain imbibed substances that contain enormous amounts of energy, like the bio-extract that feeds unhatched Antlion larvae, facilitate easier access to this higher manipulation (resulting in a -5 to the required DC). In this state, every member of the ritual gains +4 to Intelligence and Wisdom, but loses their Dexterity mod and their deflection bonus to AC and can only take single move actions while they pursue the activity that requires them to use this power. Due to the steep demands of this technique in the shape of skill checks, it requires Vortigaunts of quite high level to perform this.