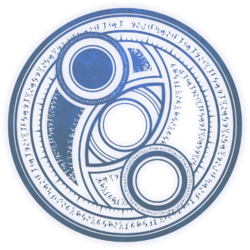 "Umbra Witches - controllers of the dark power. The ways of their discipline were quite varied - breathing, movement, medicine, and tactics were joined in the Middle Ages by training in the operation of heavy weapons, culminating in a curriculum whose total breadth and intensity are hard to ascertain. Those with the power could become Witches despite being of low birth, and those without the power would be forced into secular life, regardless of any blood-ties to a Witch clan." - Antonio Redgrave

The umbra witches are a clan of European dark art practitioners from ancient times. Their affinity is to Inferno, darkness, and the moon. Making pacts with demons to possess their extraordinary abilities, the umbra witches are fluent in using the Bullet Arts as a fighting technique and in the use of abilities such as Witch Time.

Through the harnessing of Spirit Energy, Umbra Witches are practitioners of magic revolving around the influence of the moon and the evocation of beings from Inferno. While well versed in the supernatural and metaphysical arts, they are also keen in the arts of alchemy, chemistry, acrobatics, firearms training, medicine, anatomical health, and various sciences and technological prowess of many sorts, to temper and refine their body and soul in the process of handling the powerful forms of magic that they would come to wield. The umbra witches are an all-female clan of witches as per namesake; their ranks included only those who could harness spirit energy by birth and those who were strong enough to survive their brutal courses of training and study. Children born in the witches' homeland of Crescent Valley were taught the workings of Spirit Energy from a young age, and would thus manifest abilities--if they had them--at an earlier age than children born elsewhere, although what constitutes an "earlier" age is unspecified. Upon becoming a woman, a trainee would take the "Witchly Vows" and become a full-fledged umbra witch, although some candidates of particular skill and achievement were permitted to take their vows much earlier.

To gain their power, all Umbra Witches are required to make a pact with an infernal demoness to sponsor them and allow them to improve their power which allows them to summon the limbs of their sponsor to attack their enemies. The witch's shadow is then replaced by the demon's silhouette to represent this pact. When the witch dies, her soul goes directly to Inferno as part of their contract. Besides their sponsor, umbra witches may also summon other demons from Inferno by using a medium such as their hair and chanting a magic spell. It would seem that these chants, spoken in Enochian, are unique from witch to witch; they might be granted by the sponsoring demon, or they might be an invention of the witch herself.

The umbra witch's special ability called Witch Time allows them to slow down time for everyone except other umbra witches. Witches usually activate this ability in beneficial moments like after dodging an enemy attack. They can also use something called Witch Walk whenever the moon casts its glow, allowing them to defy gravity and walk on any vertical or horizontal surface. According to Antonio's Notes, it was said that these powers were obtained from their demons instead of the moon itself. Witches are also able to use the Beast Within that allows them to transform into different animals such as felines and birds. Because of their knowledge of the Bullet Arts, Witches possess great weapon knowledge that allows them to master any that they pick up. Their supernatural connections to the underworld also give them incredible strength, acrobatic skills, and lightning-fast reflexes. Umbra witches are also well versed in herbology and can concoct items that can heal them, increase their strength and magic power, etc.

The witches generally fall under the chaotic alignment. Umbra witches are never lawful. This class is exclusive to female characters only. Witches are either born or chosen, it is determined by their ability to control spirit energy or possess magic. When creating an umbra witch, you must consider your backstory on how you became a witch and your resolve as an individual. What do you believe in? What do you fight for? Do you use your mastery of the dark arts to maintain balance in the world? Or do you use your powers for personal gain? Do you live by the old word of the witches? Or perhaps you prefer to follow the ways of the new world?

The Umbra was a society with strict laws regarding contact with all non-witches (from their clan), demanding that their magical arts be kept with the utmost secrecy. Therefore, you are bounded by clan laws to never disclose the techniques you have learned. Every umbra witch abides by this law and respects clan tradition regardless of their chaotic alignment.

You can make an umbra witch quickly by following these suggestions. First, Charisma should be your highest ability score, followed by Constitution. Second, choose the Student of Magic background. Third, choose herbalism kit.

As a Umbra Witch you gain the following class features.

** The Witch Clock grants you eternal youth and aids in your ability to use Witch Time. You must always keep it in your possession. This is considered a witch's treasure.
**The stats of your Infernal weapons are the same as their normal counterparts except that they deal necrotic damage due to them being of Hellish origins.

At 1st level, through your mastery of the Dark Arts, you are capable of slowing down time to narrowly avoid danger. Three (3) per short rest, as a reaction, you can use a d12 + half of umbra witch level to reduce incoming damage and the difference is instead inflicted on your opponent. At level seven (7), if you reduce the damage to 0 you can make attack action instantly.

Because of their knowledge of Bullet Arts, Witches possess great weapon knowledge that allows them to master any that they pick up.

** Umbra Witches use arcane ammunition. They have unlimited ammunition for firearms or ranged weapons. ** Umbra Witches will always use their infernal handguns/weapons. They will never replace these weapons for another. As a witch, you can temporarily use a different weapon in an encounter, but this will only last until the battle is over.

At the first level, as part of your perks as an Umbra Witch, you are entitled to a Witchly Vow with a Demoness from Inferno. Through this pact, not only will you gain the power and special perks of your Madama, but you will be able to call upon the Madama to aid you in battle. For this class, you can choose one Madama to surrender your vows to. Once the pact has been made, your shadow will now be replaced by the Madama's silhouette.

At the 2nd level, through special training and the natural affinity to magic combat, umbra witches can unleash a barrage of blows in quick succession. As a witch, you can choose to attack using either your hands, feet, or firearms. you may use your bonus action to shoot.