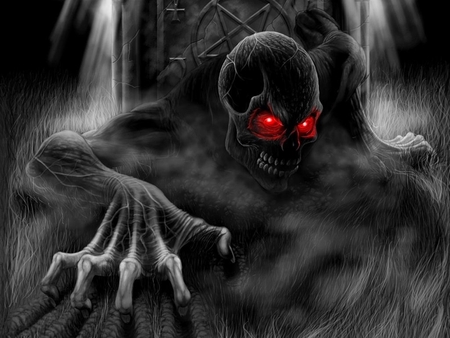 There's nothing to fear but fear itself.

A twisted visage results when a creature with magical ability suffers from a terrible epiphany. They have seen their deepest, greatest fear, and now they have learned to use it to their advantage.

Whilst some spellcasting ability may be beneficial to enter this prestige class, few pure spellcasters ever take it up the mantle of the twisted visage due its lack of further spell progression. Bards and cross-class rogues are the most common members, as they tend to have the right ability scores to benefit the most from the class abilities. Any race can spawn a twisted visage, but it is those that come from the ranks of the undead or fiends that are perhaps the most terrifying.

To become a twisted visage, you must meet the following criteria.

Spells: Must be able to use a fear effect as a spell, spell-like ability, supernatural or extraordinary ability.

Special: In order to become a twisted visage, a prospective character must divine their inner fear, inducing the phobia that is required to attain its powers. This can be accomplished by a variety of means, usually by astral calendars, hypnosis, fortune telling and the like (but how it is achieved is up to the DM). Once they have seen this inner fear, they decorate their face in its form. Every inner fear is different, but many resemble skeletons, clowns, scarecrows, etc. For the purposes of this prestige class, however, all have some form of claws and teeth.

Master Fear (Ex): Due to his personal experiences, the twisted visage has now learned to shed his fear. After all, how can one cause fear when they themselves are afraid? The twisted visage is immune to all fear effects.

Incite Fear (Su): The twisted visage has the ability to incite fear in a single creature once per day. This is similar to the cause fear spell, except there is no maximum Hit Die for an affected creature. This ability can be used a number of times per day equal to the twisted visage’s Charisma modifier.

Twisted Form (Ex): By this time even the creatures normal appearance has twisted to resemble, at least peripherally, their inner fear. He gains a competence bonus on Intimidate checks equal to his twisted visage level, and may now make such checks as move actions instead of standard actions (but still at a maximum of one per round).

Dread (Su): The twisted visage’s ability to incite fear strengthens at fourth level, allowing him to replicate the effect of a fear spell instead of cause fear.

Seeing Is Believing (Ex): At fourth level, the effects of the twisted visage’s channel inner fear ability are no longer illusory, but an actual physical transformation. In this form they have all the qualities of the aberration type (although their racial hit dice do not change) and are susceptible to effects as though they were aberrations. In addition, the twisted visage gains two claw attacks that deal damage based on his size (see table) and a +1 natural armor bonus that stacks with any other natural armor he possesses. The claws (and any other natural attacks he gains in this form) are treat as magical and evil-aligned for the purposes of overcoming damage reduction. When he takes this form, the twisted visage may substitute his Charisma modifier for his Strength modifier for the purposes of attack and damage rolls.

The Stuff of Nightmares (Su): A twisted visage of fifth level or higher never appears exactly the same way; its appearance automatically varies depending on the person looking at it, but it always seems to assume the most terrifying form possible. Once per combat encounter, when the twisted visage assumes the form of his inner fear, he may designate a single opponent within his chill aura that he has a direct line of sight to. This target must succeed on a Will save (DC 10 + twisted visage level + Charisma modifier) or die as through they were affected by a phantasmal killer spell, caused when they saw their own greatest fear within the twisted visage’s ever-shifting form. Success indicates that the target did not see their worst nightmare, but they are still so affected by the horror of the visage's form that they take 3d6 points of damage.

Improved Twisted Form (Ex): At 6th level, the twisted visage’s ability to control his form of inner fear improves dramatically. He now gains a bite in addition to his claw attacks (they all deal the same amount of damage), and gains Multiattack as a bonus feat.

Greater Twisted Form (Ex): The twisted visage gains an additional +4 bonus to Charisma when he channels his inner fear at 8th level or higher. He also gains Improved Multiattack as a bonus feat, and his natural attacks deal damage as if he were one size category larger than normal. If the twisted visage is already Colossal, his natural attack damage increases to 8d6.

Keening (Su): A twisted visage of ninth level may release a horrifying, eerie shriek that instills fear into all within a 30 foot radius once per day. Opponents in the radius are affected based on their Hit Dice if they fail a Will save (DC 10 + twisted visage level + Charisma modifier). For the purposes of this ability, the twisted visage’s caster level is considered to be his total Hit Dice.

This is a sonic, fear effect. Those who are either deaf or immune to mind-affecting effects are also immune to the twisted visage’s keening.

The Sum of All Fears (Ex): The twisted visage’s ability to channel his fear reaches its pinnacle at 10th level, when he becomes a paragon of fear and death. The change is now permanent, although he may resume his previous appearance as a free action if he wishes to do so. The twisted visage’s type changes to aberration, and his body now becomes not wholly material, granting him a fly speed equal to his base speed (perfect maneuverability) and a 20% miss chance towards all attacks. In addition, the twisted visage can use his stuff of nightmares ability whenever he wishes, although the limitation of once per encounter still applies.