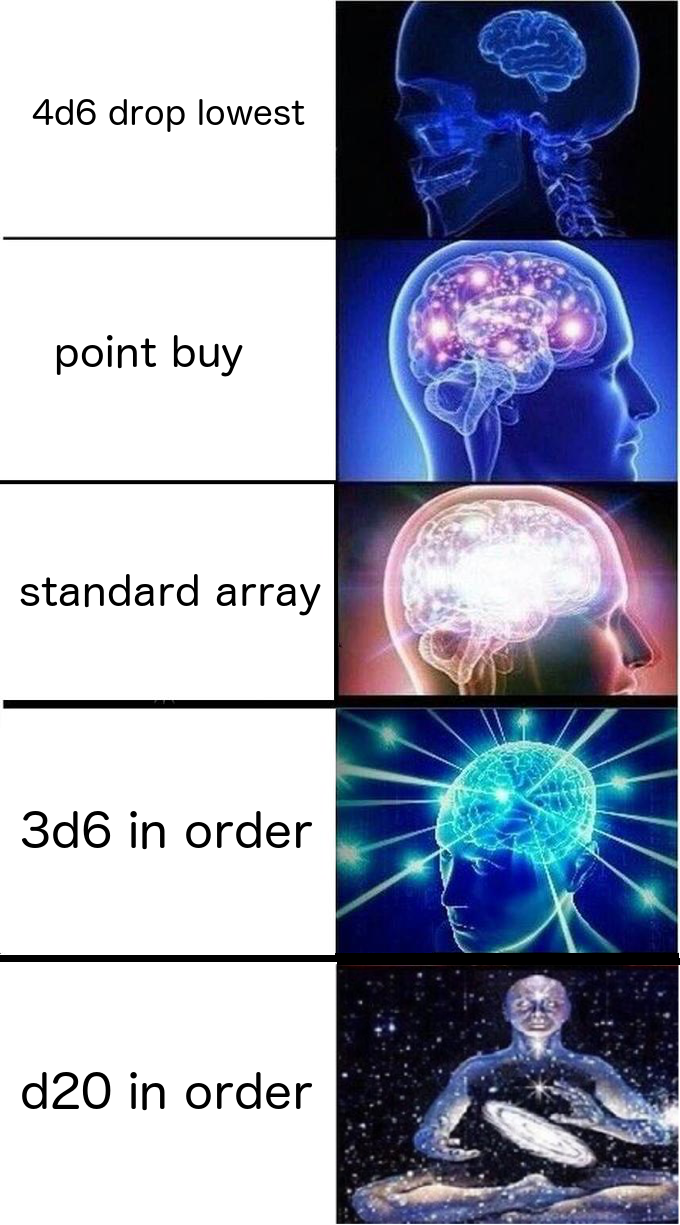 Have you ever started a new campaign with fresh characters and just found yourself bored with the system as a whole? Have you ever wanted to try things that were never supposed to happen in an entirely "serious" campaign setting? Have you ever wanted to be the most socially awkward bard or intellectual barbarian ever? If you answered yes to any of the previous questions, then Transcendent mode is just for you! Transcendent mode is a variant game mode which changes the very way with which you create the characters of a new campaign. The basic premise is to take all of the worry about optimized builds out of your players' hands and instead have them rely on RNGesus to make their choices.

Rolling up a Character... Literally![edit]

The first basic rule of Transcendent Mode is that everything in character creation is rolled for. For sake of hilarity, everything including stats, race, subrace (if applicable), class, and items are all rolled for. Generally speaking, you may encounter weird dice (e.g. d24), thus refer to here for clarification.

The first step of character creation for Transcendent Mode is to determine what race your character is. The selection of possibilities is entirely up to the DM to determine, however here is the basic list using only "vanilla" races (i.e. those given by WoTC thru the Player's Handbook (PHB), Volo's Guide to Monsters (Volo), and Elemental Evil Player's Companion (EE)). For any race that has options for subraces, the player would roll for those as well. Obviously, the DM can create a list of any and all races he/she may wish to use (e.g. My group had a list of 100 races which I created after looking through all of the homebrew races).

The next step in Transcendent character creation is to roll your character's gender, alignment, and class. For gender, you may find it easiest to just flip a coin, but you may use nonbinary genders is you so will. Alignment is perhaps the very first part of the truly hilarious parts of Transcendent mode. You may quickly find that your character is very odd in their leanings relative to the party and to the character's class.

For alignment, roll a d10

The penultimate step of Transcendent character creation is to roll your ability scores *cue thunder*. For those of you that have reached this far, you should have noticed the image at the top of this article. You will do precisely that. For your character's ability scores, roll 1d20 for each in order (i.e. Strength, Dexterity, Constitution, Intelligence, Wisdom, and Charisma, in that order specifically). This may have hilarious results at any end of the spectrum, from a character with ridiculous stats to one with abysmal ones, anything could happen. Additionally, it may be advisable to refer to the 3.5e SRD for ability scores to determine the result of having 0 in a given score as if a 1 is rolled for an ability score, its possible to reduce it to 0 (but you may also wish to just say that the minimum is 1). Those pages are given below:

The final step of creating a Transcendent character is to roll for items. Each vanilla class has been listed with what you would roll for. The list of rolls for each type is given afterward. if you use homebrew classes, use these as guidelines just ensuring that the player has access to any items that are required to make the class even function (e.g. spell casting foci).

Bags: Roll 1d30 2d6 times and get a Backpack (you can adjust this as you see fit in practice)

What About This Thing You Didn't Explain?[edit]

My group didn't ever really delve into backgrounds and other such things so I never wrote any particular rules for how to determine these things. You may wish to roll for them or simply let the players create a backstory and choose a background based upon what else they rolled. This could of course lead to any number of hilarious and memorable characters. Additionally since the players rolled for all their things, it may be worthwhile or palatable to have the DM roll for all of the encounters or towns just to see what happens. Obviously, all of these rules are meant to cause ridiculous things to happen. For example, we had a demolitionist in one party which accidentally used a bomb on the 2000 ball bearings that our rogue had poured on the ground in order to trip the undead ogres we were fighting... in a small enclosed room. The result being as you would imagine. Feel free to add any rules you use to determine any of these other things. For example, you might decide to have players roll for archetypes, spells learnt, ability score increases, or feats.