There's many unknown planets around, and with portals appearing on all of them, many adventurer's would be hard-pressed not to visit at least one other world before the end of their journeying. 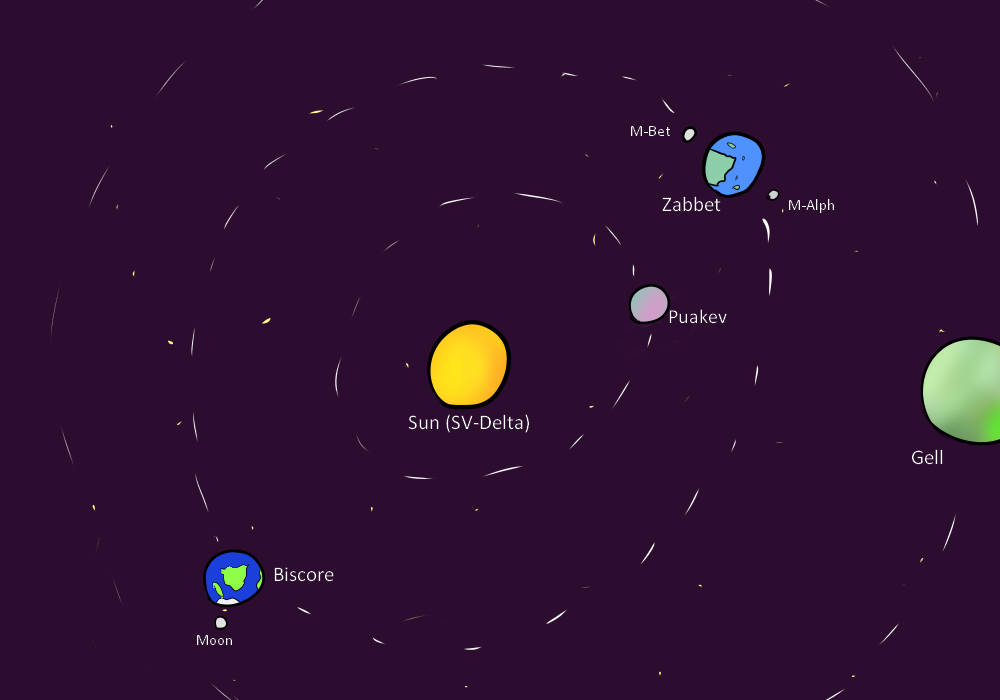 The sun is prominently known for shining light upon the closest planets, some of which habit life in the form of plant and animal life. The sun is called "SV-Delta" by those who live on Zabbet, as they have stranger naming conventions for things than those on Biscore. The sun's also a symbol of perseverance, life, and passion, as explained by those of the Bolezemut following. They claim Bolezemut got the sun from a large Tree, placing it in the perfect place in space for our planets to harbor life.

This planet harbors no original beings, and is pretty much a space dump for residents of planets. Scrappers can visit the planet to find scrap metal, or other useful things which may lurk. Some have even attempted living on Puakev, to no avail. This is due to how close it is to the Sun, causing the surface to be close to 270 degrees F. The only reason Scrappers can be there without dying can be because of their biology, or specially-made suits which can allow them travel for short durations (close to 5 minutes), making visiting usually not worth it unless you don't need to breathe. 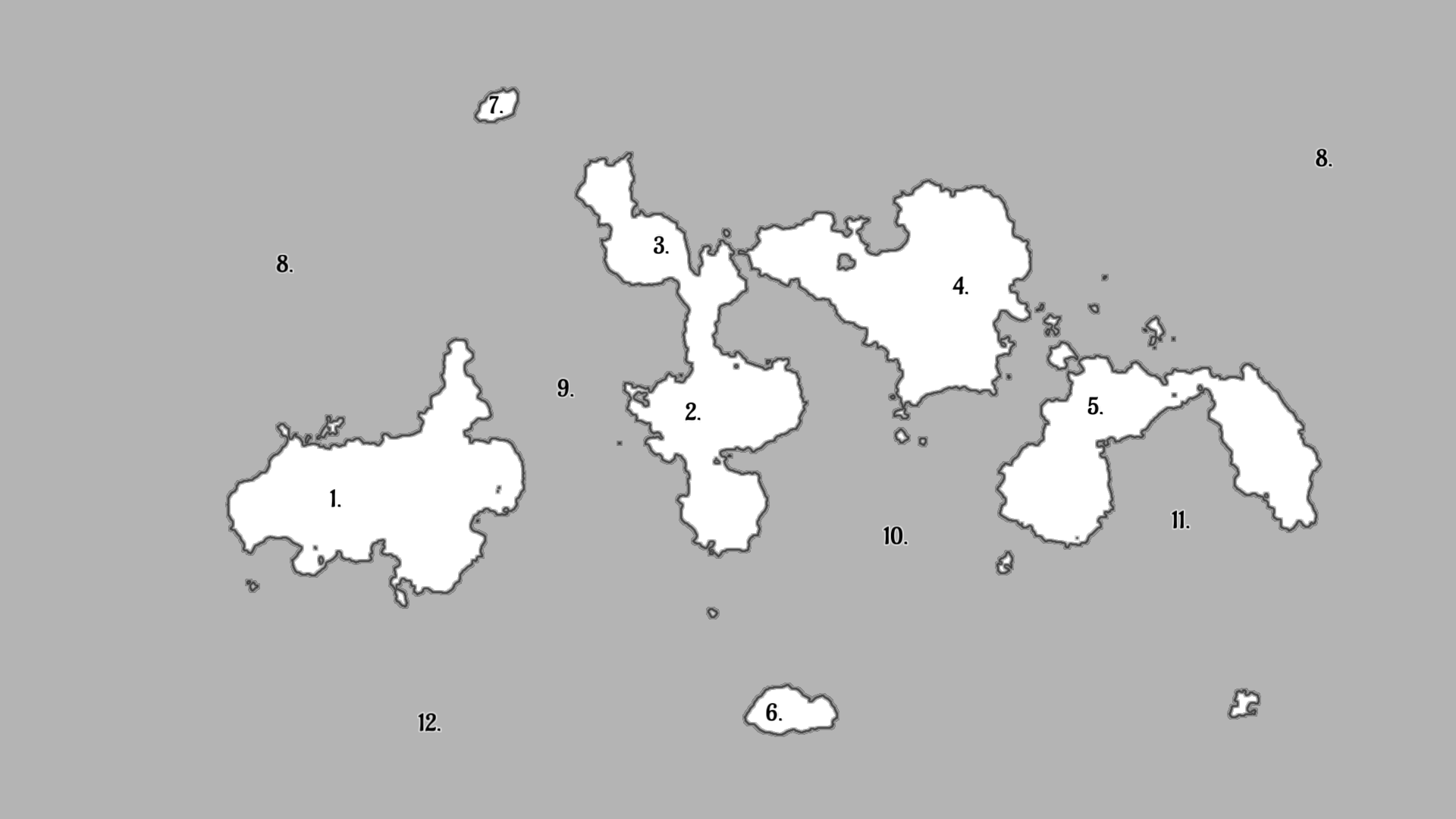 Biscore is similar to what we know as Earth, hosting Humans among many other fantasy races. The climate has seasonal rotations, which mirror each other on the Equator of it. An average year on Biscore is roughly 320 days, with each Season being 80 days. These seasons are Autumn (Start of the Cold), Winter (Coldest), Spring (Start of the Warm), and Summer (Warmest). Calenders usually split these seasons in two, following the naming conventions of Fir and Sec, making in total 8 periods of a year: Firaut, Secaut, Firwin, Secwin, Firspri, Secspri, Firsum, and Secsum. There are a great deal of races which live on Biscore, some of which didn't exist until the Weave Tear.

1. Hirega - A hill-bearing landscape, containing some forest and some small towns. Hirega's capital is Yomin, a large city which has a large output of exotic fruits such as Watermelon, Pineapple, and Grapefruit. Besides this, a legendary old hero resides here, and acts as inspiration towards kids living in Yomin.
2. South Zucris - The south of Zucris has some jagged peaks nearside the south coast, almost like spikes had impaled Biscore right through. The capital of South Zucris is Funk, a well-defended fortress of a city. They are best known for making most of the gunpowder weaponry in the land, all of it being of the highest quality.
3. North Zucris - The north has less abrupt parts than the south, still containing a massive ravine in the world near the division between the North and South. The capital of North Zucris is Yabble, a bustling city which has many different people. While one person you meet could be a cheery dwarven lass, the next would be a grey-faced alien trying to tell what's wrong with your face. A main point of the capital is the portal to Zabbet in the center of the city, where the rebuilding of the city started.
4. Irsdale - The majority of the ground in Irsdale is coated in a hard rock, with many jagged crystals sprouting from the ground. The capital of Irsdale is Meintrof, where the output for the town is mainly metals and crystals. A bizarre part of the world, caused by the Weave Tear, is that the crystals grow similar to trees. This crystal is known as Valin, which is super light but brittle.
5. Dibeagle - This place is best known as the "Portal Lands", due to a large concentration of portals always appearing around the place. This hasn't stopped people from living here, however. The capital of Dibeagle is in two cities; Halber and Faxkiv. Halber is more akin to a reststop of a city, having a diverse amount of aliens going in and out of the city. Faxkiv is the largest city to be ruled by a creature not native to Biscore. The leader is a Waddle Dee, who seems to be one of the wisest leaders despite not being able to speak.
6. Celo - Almost always seeping with magma, Celo is only habited by strange people, those who wish to recluse from normal society. There is no capital in Celo.
7. Abyot - A massive crater resides on the island of Abyot. This is sometimes claimed as the birthplace of Bolezemut. The capital of Abyot is Boleze, a highly devout cluster of followers who've gathered.
8. The Great Ocean
9. Gapejaw Sea
10. Median Javogi Sea
11. Frost Gull
12. Hirega Sea 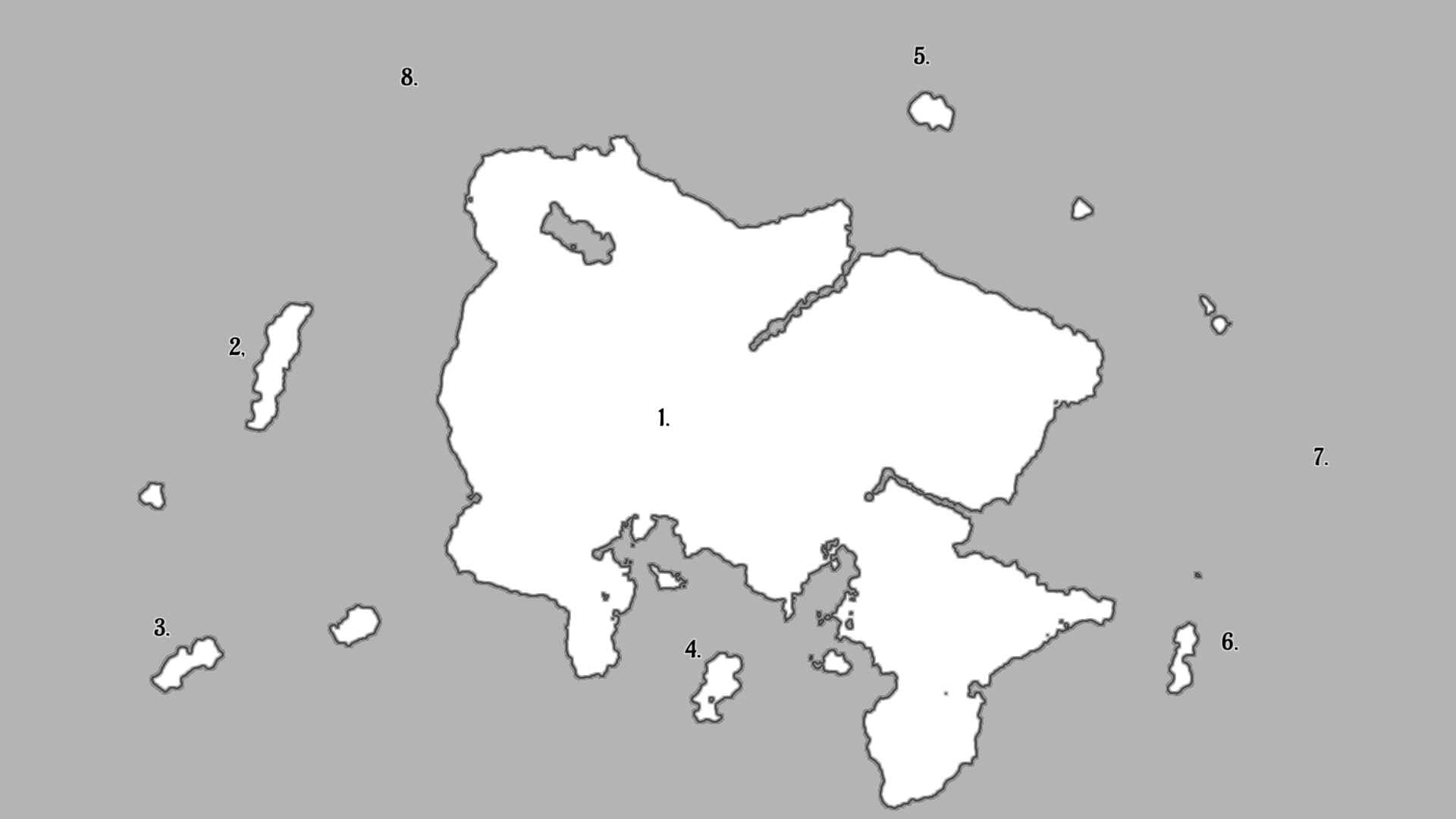 Zabbet is a more extreme planet, as said by Biscoreans. Many of the regular residents of Zabbet are stranger than other beings, the world consists of a large supercontinent with smaller islands around, the water is a light blue and the average plantlife is light green. Overall, the time system of Zabbet is split into similar stat to Biscore, due to the planets being opposite each other. The calendar for Zabbet is split into 10 months instead of seasonal partitions, listed in order of Eiss, Ziwe, Deri, Veri, Funuf, Sehe, Sie, Hact, Nune, and Zehl. There is no seasonal variance for weather, for whatever reason.

1. Allmach - The supercontinent of Zabbet, yet all of it is ruled by one great King, ruling from the shadows, which none know or dare speak the name of. The place is decorated with many types of landscape: To the north, jagged iron blades are rooted into the ground, and the temperature always is scorching. To the south, flat sheets of snow pile onto the ground, as a frosty wind blows through. There are three crown jewels (the Zabite term for Capital) on Allmach, one west, one center, and one east. Many smaller towns litter the space between, along with more bizarre landscapes.

2. Sherirdis - An island which has constant feuds over whom owns it. One week, the Dragonborn conquer it, the next a band of Imps are in rule. The place seems the best in terms of living space, as it's mostly flat, has good soil, and could be greatly used for space.
3. Flera - If you can reach it, the island almost seems as good as Sherirdis. However, many races simply cannot make it, due to the coast around it being dangerously treacherous, and the island itself flies around a mile above the sea. The happenstance of it floating is mere speculation, however it's rumoured that it was due to the Weave Tear.
4. Cape Ick - The homeland of the Imp. The place is extremely hot year-round, so it is also a good place to train for Heat Resistance. Genasi and Tieflings also like to live in Cape Ick.
5. Magaca - A huge hunk of volcanic rock, which doesn't seem easy to get onto. The King, supposedly, had banned living on the rock, for whatever reason. It's speculated that a huge amount of latent power resonates on the rock, but no one has lived to tell the tale.
6. Zagan - This island seems far back on technology, and many residents of Zagan have a burning passion for Honor ingrained into their blood. Duels between feuding families occurs every odd day, their weapons purely restricted to a single Sword or a Spear.
7. King's Ocean
8. Crown Sea

Gell is a mostly gaseous planet, only being solid near the core. The planet's gas is unbreathable by most creatures, so unless you don't need to breathe, you will most likely die. Even if you don't need to, the core of Gell can near temperatures of 800 F. As such, there are no creatures which can live on Gell. The gases on both Zabbet and Biscore can be used as many kinds of drugs depending on how you prepare them, ranging from sleeping gas to paralytic gas, or even a cosmic hallucinogen. Portals which lead to this planet much be walked into with caution.

As you go further out from the solar system, many planets are non-habitable, due to their distance from the Sun leading to a cold planet, even if it's a solid planet. Other planets with life would have to be out of the Galaxy. You can make up whatever civilizations which are not found within the planets found here, ranging from the planet's geography to the races there. You don't have to be realistic when making these planets; You can make them as outrageously against common sense as possible.