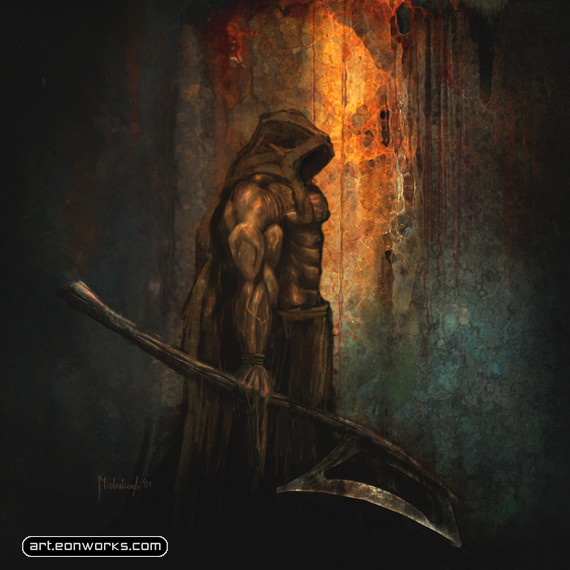 The path of the Dragon is one known by few, and that is open to even fewer. To become a Dragon, you must first understand what it is you're fighting, what it is that's wrong with humanity, and what it is that's wrong with you. Most often, you cannot choose to become one, instead you are chosen by a current one, often by one who is beginning to near the end of his life. The training that is taught to a Dragon is often filled with pain, both emotional and physical, as they must sever themselves from any friends or family, and they must temper themselves for battle.

All of the following are class features of the Dragon.

Aura Of Terror (Su): The task of the Dragon is more than many mortal minds can comprehend, causing them to fear even the air around him, which feels of decay and destruction. As a standard action, a Dragon can exude an aura of fear in a radius of 10 feet per class level. Once activated, this aura lasts one round per class level. Anyone in or entering the area must make a Will save (DC 10 + the dragon's class level + the dragon's Charisma modifier), or be panicked for 10 minutes per class level. The dragon may use this ability once per day per class level.

Culling Blow: The blade of the Dragon strikes true against those who must fall to preserve the balance, especially those who are weak of mind. Whenever a Dragon strikes a creature or object that has been affected by one of his auras, he deals an additional 1d6 points of damage. This only applies to melee attacks, and only to the first attack in a round. This damage increases by an additional 1d6 points of damage at 4th level, and again at 6th and 8th.

Control Weather (Sp): It is said, wherever the Dragon walks, rain pours from the sky, that the very seas rise up in his aid, and that the wind always blows in his favor. Starting at 3rd level, the Dragon may use Control Weather once per day as a spell-like ability as a druid of his class level. He gains an additional use of it at 6th level,and again at 9th.

Aura Of Entropy (Su): Nothing made by man is permanent, and it is a Dragon's job to make it crumble. As a standard action, a Dragon can exude an aura of decaying energy in a radius of 10 feet per class level. Once activated, this aura lasts one round per class level. Any object within the radius of the aura, or carried into the radius, is treated as if it's Hardness was 1 point lower per level of Dragon. Magic items get a Fortitude save (DC 10 + the dragon's Charisma modifier) for half the normal effect. Items effected remain this way for 10 minutes per class level, even if they are carried out of the aura, of the aura moves. The dragon may use this ability once per day per class level.

Unraveling Harmonics Of The Blade (Ex): The power of decay is great, but the Dragon's destructive might also stems from his great proficiency with a blade, allowing him to pinpoint the weak spots in objects, and to exploit them. At 7th level, whenever the Dragon attempts to break or smash an object, or when he deals damage to a construct, he deals additional damage equal to his Charisma modifier.

Aura Of Mind-Breaking (Su): The pure terror that a Dragon inspires can often lead to the utter destruction of a bystander's mind, a trait that Dragons have learned to use to their advantage. As a standard action, a Dragon can exude an aura of utterly terrifying fear in a radius of 10 feet per class level. Once activated, this aura lasts one round per class level. Anyone in or entering the area must make a Will save (DC 10 + the dragon's class level + the dragon's Charisma modifier), or become permanently confused.

The epic Dragon gains a bonus feat (selected from the list of epic Dragon feats) every other levels after 10th.

Combat: A Dragon prefers to be a front-line combatant, using his enemy's fear to gain an edge.

Advancement: Dragons are warriors, no matter what else. A Dragon is best off continuing along the path of the destroyer, focusing on improving their martial might, while building on their fear-based abilities.

Resources: The Dragon is a loner, and no amount of companions can change that. Even in a party of adventurers, they typically keep to themselves, using their allies as support until they lack the need for them, at which point they usually abandon or slay them.

A Dragon is a great bringer of destruction and chaos, as such they are feared by those who don't understand them, and even if they did , the Dragon would still kill them anyway.

NPC Reactions: A Dragon is usually met with two emotions when encountered by an anyone who is weaker than them: anger, and to a greater extent, fear. Whenever possible, Dragons are slain on sight.

Characters with ranks in Knowledge (Arcana) can research Dragons to learn more about them. When a character makes a skill check, read or paraphrase the following, including information from lower DCs.

Dragons in the Game[edit]

Dragons are the bringers of the apocalypse in many ways, at least for civilized races. Dragon NPCs seek might seek to kill the PCs because they see them as a threat to their campaign of purification, or they might seek to train one as their own.

Adaptation: While the Dragon will work in many campaigns, perhaps in some they are the followers of Chronepsis, the dragon that watches all. In such cases, consider making the Dragons into his minions, who believe that they must rebalance the world after the reign of man.