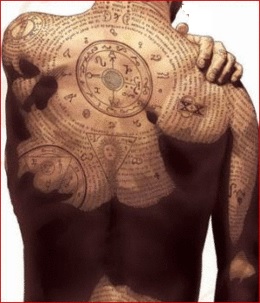 Tattooed vessels are occultists who dabble in pact magic, binding the last vestiges of ancient powers to their will. Rather than forming symbiotic composites with these hoary entities, however, tattooed vessels see them as tools to be used at their leisure, whether it be in the pursuit of greed and power or, in very rare cases, putting their eternal soul on the line for the greater good. After all, if these shallow reflections of bygone powers were truly as powerful as they'd have their binders believe, why did they end up in such a pitiful state to begin with?

In order to gain this greater command of vestiges, tattooed vessels have the sigils of their favored vestiges branded into their living flesh. Not only does this make their connection to these ancient powers stronger, but the vestiges themselves get to experience the living worldy more vividly, and thus more eager to accept the vessel's pacts despite the vessel's ulterior motives for doing so.

While tattooing is the art used by more civilized hallowed vessels, other forms of body modification are certainly possible. The scarification favored by barbarian berserkers and the many piercings of the masochistic tribesmen of the jungle lands are but two examples.

That said, most tattooed vessels tend to be lone scholars locked away in obscure libraries and laboratories, while only a handful travel abroad and adventure in order to further their wisdom and power in a more direct approach.

Abilities: Charisma and Constitution are the most crucial abilities for a tattooed vessel. Charisma helps bolster their warlock abilities, while Constitution allows them access to greater vestiges more easily.

Races: Humans, dwarves, and half-orcs are the races most likely to dedicate themselves to the rigors of being a tattooed vessel.

Alignment: A tattooed vessel can be of any alignment, though neutral or evil alignments tend to be the norm due to the restrictions of the warlock class. However, other invocation-using classes can fulfill the prerequisites of the the tattooed vessel, so it's not completely unheard of to see good-aligned dragonfire adepts taking up the mantle, for example.

Weapon and Armor Proficiencies: You do not gain any additional proficiencies as a tattooed vessel.

Invoking: At each level, you gain new invocations known, increased damage with eldritch blast, and an increase in invoker level as if you had also gained a level in any invocation class you already possess. You do not, however, gain any other benefit a character of that class would have gained. Your effective binder level stacks with any levels you have in an invoking class for these purposes, both retroactively and proactively. If you have more than one invocation-using class, you must choose which class is advanced each time you gain a level as a tattooed vessel.

Soul Binding: At each tattooed vessel level, your soul binding ability improves as if you had also gained a level in the binder class. Thus, your tattooed vessel levels, invocation levels, and binder levels stack for the purpose of determining your bonus on binding checks, the effectiveness of your vestige-granted abilities, your ability to bind higher-level vestiges, and the number of vestiges you can bind at one time. You do not, however, gain any other benefit a binder would have gained, such as bonus feats of pact augmentations.

Otherworldly Secret (Su): At each tattooed vessel level, you discover a secret arcane technique from your vestiges, allowing you to choose one of the following special abilities as a granted power any time you have a bound at least one vestige. Once chosen, your choice is permanent.

Tattoo Sigil (Ex): For each tattooed vessel level you gain, choose one vestige you can currently make a pact with. Using your skill in alchemy, you create a special ink (costing 100gp per level of the vestige) that you can use to tattoo the vestige's sigil into your flesh. The process takes approximately one hour per level of the vestige. At the end of this time, make a binding check (you may take 10 or 20 on this check, though it increases the time it takes to tattoo the sigil as per the standard rules) using a DC equal to the vestige's standard DC +5. If successful, from that point forward you can bind that vestige as a move-equivalent action without needing to draw their sigil. This increases to a swift action if you have the Rapid Pactmaking feat. Each tattoo you possess also grants you a +1 bonus on any future binding tests you make regardless of vestige.

Only a limited wish or wish spell can erase a tattoo once it has been successfully scribed. If such measures are taken, you may choose to tattoo another sigil in its place using the same process detailed above.

Soul Guardian (Su): As a tattooed vessel, the pacts you make create a strong bond with your vestiges, allowing you to become even more resistant to outside influence. Use your effective binder level, as opposed to just your binder class levels, to determine the strength of the soul guardian class feature. This increased effectiveness only applies when you are bound to at least one vestige with which you have had their sigil tattooed. When not bound to such a vestige, your soul guardian class feature is based solely on your binder class levels.

Potent Sigils (Su): For every tattooed sigil you possess, you gain a +1 bonus to the DC of any supernatural abilities granted by your vestiges.

Vestige Expulsion (Ex): You may now freely expel any vestige you possess up to one time per day per Charisma modifier. This requires a swift action, and you must succeed at a standard binding check with a DC equal to the normal binding DC for the vestige you are attempting to expel. If attempting to expel a vestige to which you bear their sigil, this becomes more difficult increasing the DC by +5. If you fail, the attempt counts against your normal daily limit and you may not attempt to expel another vestige for 5 rounds.

Failure to expel a vestige in this manner results in 1d6 points of non-lethal damage per level of the vestige, and you must make a Fortitude save (DC equal to the vestige's binding DC) or be nauseated for 1d4 rounds.

Perfect Pact (Su): When binding a vestige who's sigil you have been tattooed with, it is always considered a good pact for all purposes except influence. A binding check is still required, however, with a successful check protecting you from their influence. Additionally, an illusion of the vestige no longer appears unless you desire it, and you are not forced to bargain with it in order to forge a bond.

Finally, you may bind one additional vestige above your normal limit, but at least one of your vestiges must be one with whom you have a sigil tattooed. If you attempt to expel such a vestige while over your normal limit and you are not bound to any other tattooed vestige, you must make an immediate Fortitude check with a DC equal to the most powerful vestige you are currently bound to. Failure indicates that you suffer 1d6 points of non-lethal damage per level of the vestige expelled and are dazed for 1d4 rounds.

Extra Tattooed Sigil [General]
You may tattoo an additional sigil onto your flesh with which to bind vestiges.
Prerequisite: Tattoo Sigil class feature.
Benefit: Using the same process you use to tattoo sigils onto yourself, you may tattoo one additional sigil for any vestige you can bind upon taking this feat.
Normal: You are limited to a number of tattooed sigils equal to your class level as a tattooed vessel.