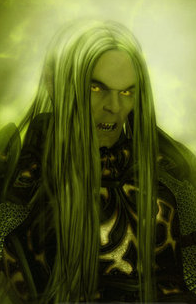 No secret is barred from the tainted disciple's grasp, be it hidden beyond the gates of Heaven or buried deep within the bowels of Hell. And if such forbidden knowledge comes at the cost of his soul, he's willing to pay that price...

All of the following are class features of the tainted disciple.

Proficiencies: Tainted disciples gain no proficiency with any weapon or armor.

Spellcasting: At each indicated level, you gain new spells per day and an increase in caster level (and spells known, if applicable) as if you had also gained a level in a prepared divine spellcasting class to which you belonged before adding the prestige class level. You also gain new invocations known, increased damage with eldritch blast, and an increase in invoker level at each level as if you had also gained a level in the warlock class. You do not, however, gain any other benefit a character of that class would have gained. If you had more than one prepared divine spellcasting class before becoming a tainted disciple, you must decide to which class to add each level for the purpose of determining spells per day, caster level, and spells known.

Level Advancement: The power of taint is seductive. Once you have tasted its attractions, it is hard to resist. If you wish to advance a level in another class after taking your first level as a tainted disciple, you must succeed on a Will save (DC = 10 + your corruption score). If you fail, you must stay in this prestige class and advance another level in tainted disciple instead. If you succeed, you can advance the level in another class, although you must still attempt the saving throw the next time you gain a level or default back to this prestige class.

Once you reach 10th level as a tainted disciple, you can freely advance in other classes until you reach epic levels, at which point you must once again succeed on a Will save in order to advance in another class.

You accumulate taint for casting your spells. Each time you cast a divine spell, you must make a Will save (DC 10 + spell level) or increase your depravity score by 1. In additional, all divine spells you cast are evil spells.

If you begin at a level higher than 1st level, you begin play with corruption and depravity scores equal to one-half your Charisma score (unmodified by temporary boosts such as magic items or spells) + your character level + 2 per tainted disciple class level (effectively tripling your class levels). If you are undead, add +1 to this total. If you are [Evil], add +2.

Additionally, you gain an innate understanding of objects, places, and creatures that carry the taint of evil. By concentrating as a full-round action and focusing your attention on a creature, object, or specific site within 60 feet of you, you can determine if it carries or transmits taint.

Tainted Spell (Su): Select one spell you have access to. You can spontaneously convert any prepared spell of an equal or higher level into that spell, similar to a cleric casting cure spells. In addition, once per day for every tainted spell you know, you can cast one of your prepared spells as if it were a supernatural ability. You must still pay any XP costs associated with the spell, but it automatically bypasses spell resistance and does not require any other components.

Otherworldly Secret: At the indicated levels, you unlock one of the following secrets. Each one has an additional requirement that you must meet before it can be selected.

Tainted disciples gather knowledge. Upon selecting this otherworldly secret, you gain the ability to know legends or information regarding various topics, just as a bard can with bardic knowledge. You add your tainted disciple class level and your Intelligence modifier to this lore check. If you know the Magical Skill Mastery secret, you can add your depravity score instead of your Intelligence modifier to any lore check dealing with supernatural, horrific, tainted, or otherwise forbidden subjects, at the DM's discretion.

If you have unlocked at least three otherworldly secrets, your knowledge of lore beyond the realm of common experience is broadened and magically augmented. Once per day, you can use contact other plane as a spell-like ability. If your Intelligence and Charisma temporarily decrease as a result of using this ability, you must make a Will save or have your depravity score increased by 1. The DC for this Will save equals the DC of the Intelligence check to avoid the ability score decrease +10. Thus, if you contact an Elemental Plane, the DC is 17; if you contact a greater deity on an Outer Plane, the DC is 26.

On the start of your turn, your can spend a free action to invoke your hideous blow power. Doing so channels your eldritch blast into any two one-handed melee weapons you're holding at the time, and the channeling lasts until the start of your next turn. Any targets you hit with your melee attacks while channeling your blast in this way causes them to be affected by your eldritch blast (including any eldritch essence applied to the blast) in addition to your weapon and/or precision damage.

You can use your tainted magic to create magic items, even if you don't know the spells required to make them. You can substitute a Use Magic Device check (DC 15 + spell level) in place of a required spell you don't know or can't cast. Such magic items are automatically [evil].

Every morning when preparing your spells, you may select one item creation feat of choice even if you don't otherwise qualify for it (aside from caster level and/or Spellcraft prerequisites). You are treated as possessing that feat until you decide to change it during your morning preparation.

In addition, each time your eldritch blast gains an energy type, choose one of the following: acid, cold, fire, electric, or sonic. Your eldritch blast uses that element instead, much like the Energy Substitution feat.

Upon learning this secret, you may take 10 even if stress and distractions would normally prevent you from doing so when using the following skills: Autohypnosis, Concentration, Craft, Knowledge (all), Spellcraft, and Use Magic Device. If one of these skills is instead used for an extended period of time, such as researching a topic, the minimum required time to perform that action is halved. This secret also grants an insight bonus equal to half your class level (rounded up) on each of those checks.

Furthermore, for every otherworldly secret you know, you gain a bonus [metamagic] feat of choice.

Finally, you can add your depravity score to your Intelligence modifier for any check relating to the use of magic or supernatural subjects. This includes but is not limited to: Concentration checks to cast defensively, Craft (alchemy) checks or other Craft checks made to create magic items, Spellcraft checks to learn or identify a spell, and Knowledge checks made to identify most non-mundane creatures.

Furthermore, you can alter your eldritch blast if it uses one of the following shapes: burst, cone, cylinder, emanation, line, or spread. The alteration consists of creating spaces within the blast's area of effect that are not subject to the effect. The minimum dimension for these spaces is a 5-foot cube.

Finally, You can also treat your eldritch blast as a ranged weapon for purposes of feats and special abilities. For each otherworldly secret you know, you also gain one of the following feats as a bonus feat: Able Sniper, Dead Eye, Deadly Aim, Far Shot, Improved Precise Shot, Improved Rapid Shot, Manyshot, Penetrating Shot, Point Blank Shot, Precise Shot, Ranged Disarm, Rapid Shot, Sharp-Shooting, Shot on the Run, and Zen Archery. These feats only apply when using your master blaster ability unless you also learn them through other means.

You gain Obtain Familiar and Improved Familiar as bonus feats.

In addition, for every otherworldly secret you know, you may add one 0-level spell from the wizard/sorcerer spell list to your list of known spells, reflecting a cantrip your familiar helped you develop.

This secret allows you to apply a metamagic feat you know to a spell you cast by paying an additional cost in blood. By draining your own blood, you can enhance your spells without using a higher-level spell slot. The cost is a number of points of Constitution damage equal to the spell slot adjustment of the metamagic feat. Thus, casting an empowered flame strike spell costs you 2 points of Constitution damage, because an empowered spell uses up a spell slot two levels higher than normal.

If you do not have a Constitution score, you cannot use this ability.

Your eldritch blast becomes a supernatural effect. It still requires a somatic component, but is no longer subject to spell resistance (though it can still be suppressed in an antimagic field), and it does not provoke an attack of opportunity. This secret may only be unlocked at 9th level. You may still apply any eldritch essence or blast shape essence to your eldritch blast when using this secret.

Additionally, for each otherworldly secret you know, you gain a bonus eldritch essence or eldritch shape invocation from your list of available invocations at each level you unlocked a secret.

Spontaneous Metamagic (Ex): You can apply metamagic feats to any of your prepared spells just as a spontaneous caster can. This increases the casting time as normal, unless you have the Rapid Metamagic feat (which you automatically qualify for).

Epic Spellcasting Progression: At each level above 10th, you gain new spells per day and spells known as if you had gained a level in a prepared divine spellcasting class you belonged to previously, up to the maximum spells per day and spells known by that class. Your caster level in that class increases by +1. You also gain new invocations known, increased damage with eldritch blast, and an increase in invoker level at each level as if you had also gained a level in the warlock class, up to a maximum of 20th level.