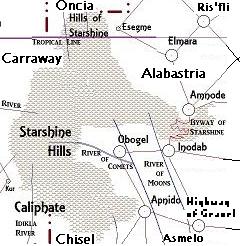 The Starshine Hills are a vast region of rocky hills inhabited by roving bands of humanoid marauders, but valued for the vast and seemingly inexhaustible supply of metals and gemstones. These hills sit in the midst of the Caliphate, Carraway, Alabastria, Oncia, and Chisel. There are no indigenous creatures here, and, even in the days the Patrons walked the earth, it was barely inhabited. The land seems impervious to landbonds, or perhaps, the land here is so infertile, that even the landbond has little effect. The hills get their names from the gleaming minerals that speckle its exterior, mostly gypsum and quartz of little value. However, at night, the entire area seems to sparkle, reflecting any ambient starlight or moonlight for remarkable effect.]

The hills are occupied by the "hill peoples", which are discrete bands of humanoids, including humans, dwarves, goblins, shedim, ravin, and others, who scavenge off the land and hunt the various game animals, particularly wild goats and rams, that dwell in the hills. These bands have no discernable leadership, operating as autonomous tribes with loose affiliations. The kingdoms that neighbor the hills often send mining companies into the hills, heavily guarded, to mine specific veins of ores and metals that are located. Sometimes these companies will clash with one another, sparking international incidents.

The hill peoples are rough peoples, dressed in woolen cloths, supplemented with whatever armor they can scavenge from victims of their raids. However, they are not without some culture. The hill peoples have a logn history of the art of storytelling. Moreover, they have fashioned the materials of the hills into horns and fiddles, with which they play delightful music. Many a professional musician has traveled to the hills to listen to their rustic tunes.

The Starshine Hills are a nuisance to most armies traveling across their span. Chiseli armies often use the hills to retreat to when Imperial armies try to crush them, and the rocky terrain offers both plenty of hiding places, and make it difficult for large armies to pass. It is said that Oncia once spend thirty years in exile here, during which time she used her magic to make a vast underground palace, that may still hold treasures that she keeps hidden away here in case she ever finds herself in exile again.