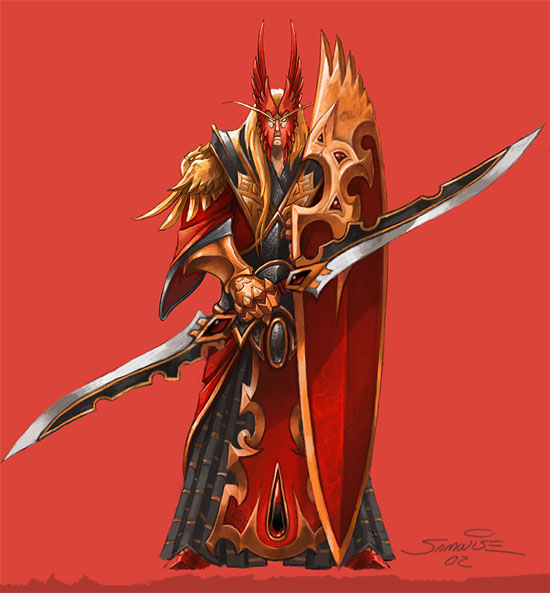 The cunning spellbreakers have mastered the arts of spellcraft to such a degree that they have become immune to the effects of even the most powerful magics. Coupled with their fierce combat skills, their spell immunity makes them implacable foes when facing magic-wielding enemies. However, the spellbreakers' most astonishing ability is to actually steal their enemies' beneficial enchantments and grant them to their own comrades. This uncanny ability has turned the tide of more than one battle in the spellbreaker's favor.

The Spellbreaker is a strong anti-magic unit with an array of defensive abilities and a small amount of offensive abilities as well. Some of their most potent talents include a Spellsteal that moves enchantments from an enemy to an ally, and Control Magic which lets them take control of an enemy summoned creature.

Abilities: The most important attribute for a Spellbreaker is Intelligence. All of their class spells and spell-like abilities are linked to the Intelligence modifier. Dexterity also plays an important role, as it helps in attack rolls with their Glaive Toss ability and it provides a much-needed bonus to their AC. Constitution comes in third, as it adds greatly to their survivability, with Strength, Wisdom, and Charisma bringing up the rear.

Races: Spellbreakers are almost uniquely elven, as only the elegant magical aptitude of the High Elves can generally achieve the amount of mastery needed for such a skill-set.

Alignment: Spellbreakers are a section of law-keepers in many elven settlements, and as such they are generally of the Lawful Neutral or Lawful Good alignment, though Chaotic Good, Neutral Good, and True Neutral are also common. Any evil is much less common, but not impossible.

All of the following are class features of the spellbreaker.

Weapon and Armor Proficiency: A spellbreaker is proficient with all simple and martial weapons as well as with light armor and shields (including tower shields). All spellbreakers are also proficient with glaives and other types of two-bladed swords, which are considered exotic to other classes.

Glaive Toss (Spell-like Ability): A spellbreaker's glaive (and only their glaive; no other weapon can be used with this skill) can be thrown from a distance to damage enemies. Whether the attack hits or misses, the glaive returns to the spellbreaker's hand at the end of the attacking phase (but before the end of the turn). Throwing the glaive acts like a basic ranged attack, aside from one specific difference. Being that the glaive toss is magically-assisted, the spellbreaker can choose whether to use their Dex modifier or Int modifier with the attack roll. A glaive toss attack roll should look something like this: 1d20 + Base Attack Bonus + Modifier. Damage is calculated based on the damage of the thrown glaive. Glaive Toss has a range of 20 (4 squares).

Feedback (Spell-like Ability): At 4th level, a successful glaive toss or melee attack with a spellbreaker glaive has a chance to make an opponent forget one of their spells. If the opponent fails a Will Save against your attack roll, they lose one spell per day of the lowest level, and works progressively higher until the enemy has no spells per day left. Feedback only works once per turn, regardless of the number of successful attacks.

Mana Burn (Spell-like Ability): At 16th level, a spellbreaker's Feedback ability gains a potent auxiliary feature. Whenever an enemy is successfully hit with Feedback, they experience a terrible burn as the spell slips away from them. This burning causes damage equal to the level of the spell burned + the spellbreaker's Int modifier.

Spell Steal (Spell-like Ability): Starting at 5th level, the spellbreaker can attempt to steal a beneficial spell from an enemy and transfer it to himself or one of his allies. The opponent can attempt a Will save against 10 + Spellbreaker Level to prevent this from happening. If the spellbreaker is successful, they may choose a new recipient for the enchantment. It's duration remains the same.

Combat Casting (Supernatural Ability): A spellbreaker's greater understanding of spellwork allows them to wear up to light armor while casting spells and still suffer no penalties due to arcane spell failure chance.

Spell Immunity (Supernatural Ability): At 20th level, a Spellbreaker is completely immune to all spells and spell-like abilities. Any other ability types, such as supernatural abilities, will still affect the spellbreaker.

Spells: Spellbreakers choose their spells from the following list:

Spellbreaker Glaive: The spellbreaker's glaive (a two-bladed sword) is his most iconic and most important piece of equipment. All of their most potent offensive abilities are linked to the glaive. The glaive functions as a one-handed double weapon, meaning if the wielder wishes they can attack as if they were dual-wielding but only during a full-round attack. Full statistics for the Spellbreaker Glaive can be found below.

Phoenix Mask: While almost as iconic as the glaive, the Phoenix Mask is simply the mark of a spellbreaker. It provides no combative or passive bonuses to a spellbreaker though it may help one command respect from a civilian if they so desire. There is nothing magical about a standard-issue phoenix mask.

Spellbreaker Shield: The Spellbreaker Shield is simply a regular tower shield with a custom design. Just as with the phoenix mask, there is nothing innately magical about a standard-issue spellbreaker shield. The statistics for the shield are listed below.

Spellbreaker Armor: Spellbreaker Armor is a mixture of padded cloth, leather, and chain. It provides a good amount of defense at the loss of very little mobility, though they're still not as mobile as one in regular clothing might be. Just as with the shield and the mask, there is nothing innately magical about standard-issue spellbreaker armor. The statistics for the armor are listed below.