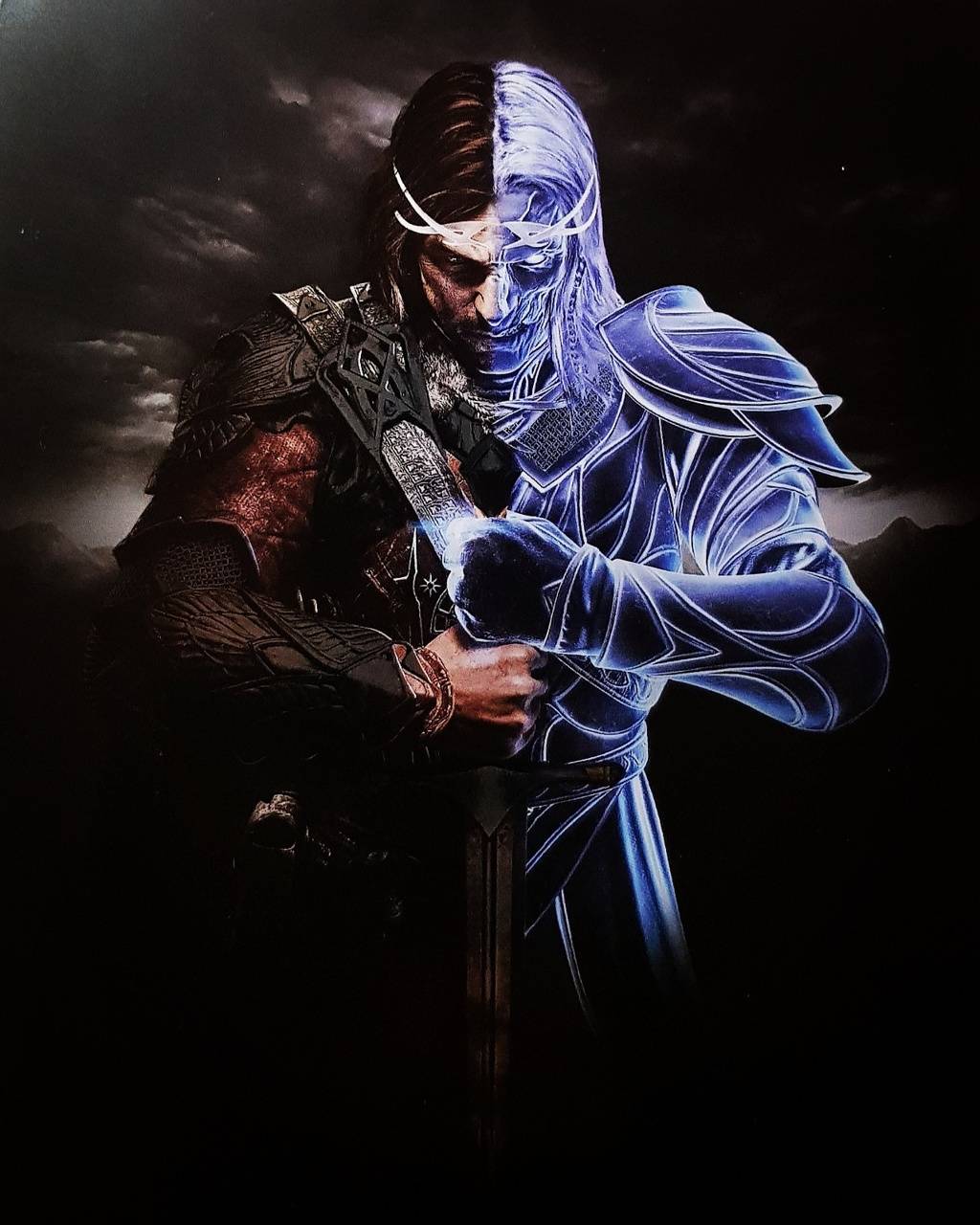 Soulbound constantly searching for new pacts and pacts forbidden by the gods.

The two orders of Soulbound were born out of the desire of some creatures to be no longer dependent on Gods or their insane doctrines that restrict people's freedom, the ultimate motivation of these Clans is to break the great planar wheel and take control of the plans. And created an empire of people free from Gods or Primordials, where they will own their own souls.

There are only two ways to become a Soulbound, which is choosing and following an two distinct orders, the two orders are follow different doctrines and each has its motivation, once begin Soulbound is impossible to assume another unconnected destiny your Clan. The first order is known as Bloodstone. They worship the 'momentary god' Karsus, through the vestige of Pacts they maintain contact with the soul of Karsus which is linked to the material world of Faerun. The second order lies beyond the Planes in the material world known as K.A.D.E.S, there creatures called the incarnated undead Nerphertys and energy-blade bearers, are dedicated to a demi-lich known as 'The Precursor'.

Pact Augmentation (Su): Beginning at 1nd level, you can draw additional power from the vestiges you bind. As long as you are bound to at least one vestige, you can choose one ability from the following list. Each time you rebind a vestige, you also reselect your pact augmentation ability.

As you attain higher levels, you can make additional selections from the list. You gain one additional ability at 1th, 5th, and 11th, and 14th level (to a maximum of five selections at 14th level). You can choose a single ability multiple times, and their effects stack. For instance, at 14th level you could choose bonus hit points twice and damage reduction twice, gaining +10 hit points and damage reduction 2/—.

Soul Binding (Su): Through special methods known only to binders, you can contact a vestige and make a pact with it. At 1st level, you can make a pact with one vestige at a time. At higher levels, you can form and maintain pacts with multiple vestiges simultaneously, as shown on Table 1—1. You must complete the summoning and binding process with each separately, so each has its normal chance to infl uence you. You bear the physical sign of binding for each one. Your effective binder level, or EBL (your binder class level plus any soul binding bonuses you receive from prestige classes or other sources), determines the maximum level of vestige you can summon, as well as all other functions related to binding vestiges. This value equates to your binder class level, as given on Table 1—1, for this purpose. If the vestige you are trying to contact is of a higher level than your indicated maximum, you cannot summon it.

To contact a vestige, you must draw its unique seal visibly on a surface (generally the ground), making the image at least 5 feet across. Drawing a seal requires the ability to mark a surface and 1 minute of concentration, and the act provokes attacks of opportunity. A seal not used within 1 minute of its drawing loses all potency, and you must draw a new one to contact the vestige. A vestige might also have other requirements for contact, as noted in its entry (see The Vestiges, page 16, Tome of Magic).

Once the seal is drawn, you must perform a ritual requiring a full-round action to summon the corresponding vestige. During this time, you must touch the seal and call out to the vestige using both its name and its title. The ritual fails if you cannot be heard (for example, if you are within the area of a silence spell). Otherwise, a manifestation of the vestige appears in the seal's space as soon as you fi nish the ritual. This image is not the actual vestige; it is merely a figment an illusion that cannot harm or be harmed by any creature. Creatures that interact with the image or study it carefully automatically recognize it as illusory. The summoned image ignores everyone but you. If you fail to address it within 1 round, it disappears. The vestige speaks in whatever language you used to call it.

To make a pact with your summoned vestige, you must make a binding check (1d20 + your effective binder level + your Cha modifi er). This process requires 1 minute, but you can choose to make a rushed binding check as a full-round action at a —10 penalty. The DC for this check is provided in the description of each vestige (see pages 16—49). You must make your perilous pact alone; others cannot aid you in any way.

Whether the binding check succeeds or fails, you gain the powers granted by the vestige for 24 hours. During that time, you cannot rid yourself of the vestige unless you possess the Expel Vestige feat. Success or failure does, however, determine other aspects of the pact. If you fail the binding check, the vestige influences your personality and your actions, and you are said to have made a poor pact. (Specifically, the vestige's presence changes your general demeanor, and it can force you to perform or refrain from certain actions.) If your binding check is successful, the vestige has no control over your actions and does not influence your personality. In this case, you are said to have made a good pact.

While under the infl uence of a vestige, you must adhere to its requirements to the best of your ability. If you are conscious and free-willed, and you encounter a situation in which you cannot or will not refrain from a prohibited action or perform a required one, you take a —1 penalty on attack rolls, saving throws, and checks until that vestige leaves you. If you are infl uenced by more than one vestige, you must act according to all their infl uences. If you fail to fulfi ll the requirements of more than one vestige or disobey a single vestige more than once, the penalties stack.

As long as you are bound to a vestige, you manifest a specifi c physical sign of its presence, as given in its entry. This sign is real, not an illusory or shapechanging effect, and someone using true seeing perceives it just as it is. You can hide a sign by mundane or magical means without penalty, or you can prevent it from appearing at all if you have the suppress sign ability.

Vestiges are bound to your soul by the pact. They cannot be targeted or expelled by any means except the Expel Vestige feat, nor can they be suppressed except by an antimagic fi eld or similar effect.

The Diffi culty Class for a saving throw against any supernatural power granted by a vestige is 10 + 1/2 your effective binder level + your Cha modifi er.

Chakra Binds(Su): Beginning at 4th level, you can bind your soulmelds to your chakras, granting you new powers based on the soulmeld and the chakra chosen. Binding a soulmeld to a chakra closes the body slot associated with that chakra (see Chakras, page 50, Book Magic of Incarnum), so that you cannot also benefit from a magic item worn on the body slot associated with that chakra.

Pool of souls(Su): You have learned the secret of the great soul traders the ability to store souls in a pool for use as an additional Essentia or bargaining chip, for use of Essentia you can save a number of souls equivalent to your Soulbound level, it will have one point of Essentia for each Hit die the soul had before it was stored in its pool. A soul without Essentia does not take up more space, but will still be stored in your pool. A Soulbound's pool is within his own soul, with a standard action he can concentrate on and know the state of all stored souls. If Soulbound is killed it will release all souls that were in its pool, causing a green spiral of souls with screams of freedom.

Reincarnate soul(Su): You can use a soul that is in your pool to reincarnate into another body that has no soul even against your will; A reincarnated soul can be born with all your memories or not, depending on how much Essentia you used from that soul. For each Essentia point used, reduce 5 years of the most current memories.

Reshape Soul(Su): You have learned to model souls by including inesistent memories, joining two souls (no more) and even erasing almost entirely the memories that still existed, at this stage the souls stored in your pool could no longer be revived by Wish or Miracle. A soul that has already been joined to another can no longer be separated or joined to another soul.

Meldshapin: You increase your meldshaper level, the number of soulmelds you can shape, the number of chakra binds you can create, and your essentia pool as if you had gained a level in the meldshaping class to which you belonged prior to gaining the Soulbound level. You do not, however, gain any other abilities of that class, such as new tiers of chakra binds unless specified. If you had more than one meldshaping class before becoming an Soulbound, you must decide to which class to add each level for the purpose of determining your essentia pool, meldshaper level, and the number of soulmelds and chakra binds available.

Vestige level: You increase your vestige level as if you had gained a level in the Binder class. You do not, however, gain any other abilities of that class unless specified.

They are almost nonexistent, deserters have their souls torn out, their memories removed, and most likely they will be reincarnated as slaves as punishment or perpetually imprisoned in a Lord of Souls' pool.

Advancement: <-Typical advancement options for characters with this class. Include desirable multiclass options->

Resources: <-What kind of assistance members of this class can expect from each other including possible organizations->

The bloodstone clan follows virtually the same ideals as the Communities of karsites work toward this goal in many ways, such as discrediting the good works of heroic spellcasters, preventing the founding of temples and schools of magic, stealing magic items and ruining their creators, and taking leadership roles in human settlements. However, they carry out all their work in secret. Despite their evil natures, karsites loathe killing other humans, primarily because doing so is robbing them of their future servants, who after all don't know any better now. However, they do relish the opportunity to harm spellcasters of any race.

NPC Reactions: A soulbound can go unnoticed as any adventurer unless of course under the influence of any vestige or use their powers in public. Note: The death of a Soulbound would draw a lot of attention due to the release of souls so beware.

Characters with ranks in <-the appropriate skills-> can research <-insert prestige class name-> to learn more about them. When a character makes a skill check, read or paraphrase the following, including information from lower DCs.

<-pluralized class name-> in the Game

Adaptation: <-Fitting this class in your campaign->