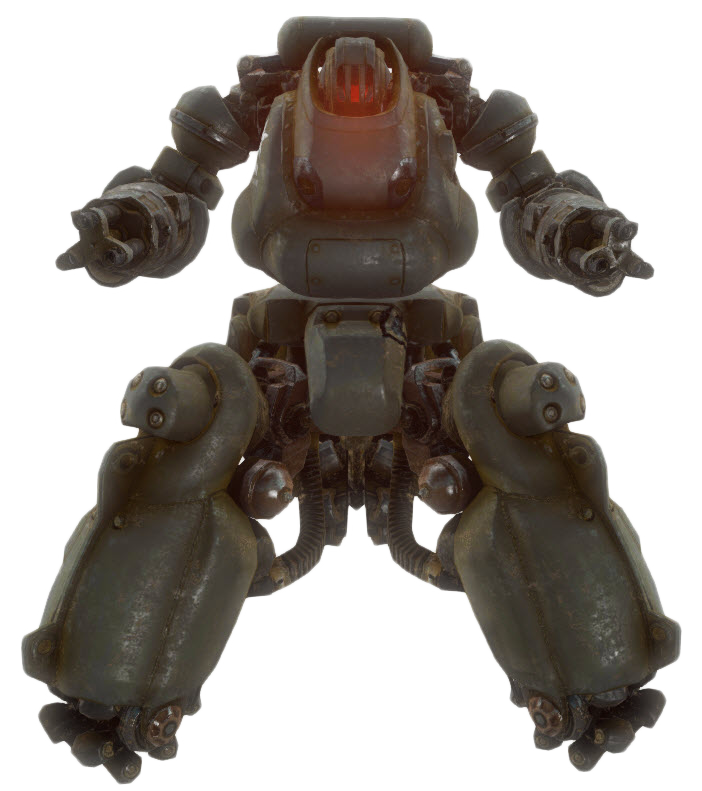 Sentry bots (military serial numbers SB-XXXX) are security robots made before the Great War with the express purpose of participating in the heaviest of firefights during war. Where the Mister Gutsy is a hovering platform with modest armor plating, and the protectron was originally designed for protecting business premises, the sentry bot is a powerhouse, equipped with sturdy armor plating, powerful weapons integrated into its chassis and high mobility, thanks to mecanum wheels mounted on its three legs.

Sentry bots attack by trying to blitz and enemy rapidly, and overwhelming it. They open combat by rushing the most imminent threat and then focusing fire on them. Sentry bots are often found patrolling old combat zones, military bases, and in derelict RobCo factories. they can sometime be found in sleep mode, and can be shut off before combat with a DC of 19.

Forward Assault (Ex): Sentry Bots can take an extra move before beginning combat to rush the nearest opponent, moving an additional 30 feet at the beginning of their turn.

Advanced Motorized Movement (Ex): Their military grade all-terrain treads mean that they take no penalty for being on uneven, or rough terrain.

Radiation Resistant (Ex): Sentry Bots, having no organic parts, are completely immune to all forms of radiation

Robotic Build (Ex): Being completely robotic, Sentry Bots have a +5 resistance to being stunned, and are immune to mind control devices like the Mesmetron. Their heavy armor plating gives them 1/2 damage on slashing and piercing damage types.