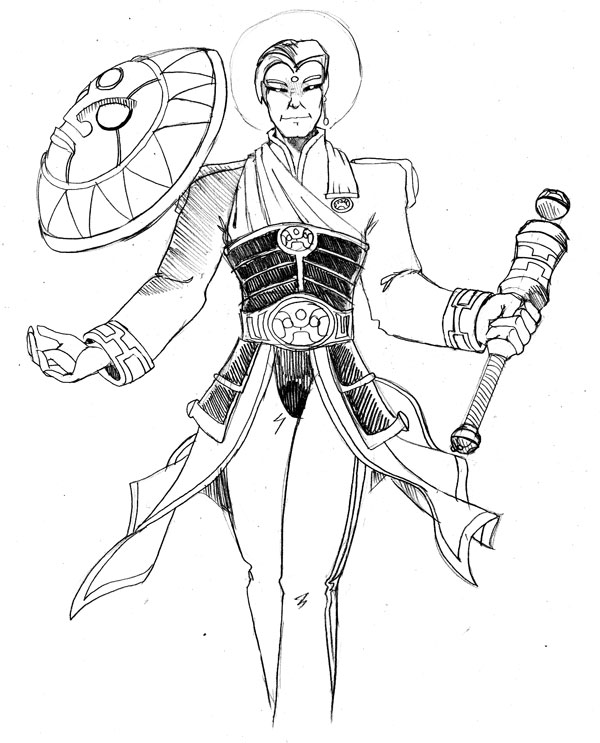 His Holiness Pyron the Third, High Emperor of the Sunglari Empire

Pyron III is the third incarnation of the long-lived high emperors who have led the Sunglari people to prosperity after the Awakening. He is a charismatic leader, capable of great deeds in the name of the Empire. Some deeds are widely spoken and others state secrets. The greatest state secret has to do with the imperial lineage, namely that every emperor after Pyron II...has been a clone.

The previous Pyron I lived for a number of years, aging and dying as mortal men are wont to do. His son Pyron II chose to change all that through science by cloning himself--effectively ruling forever. When Pyron II died suddenly, his consciousness and skills passed on to the new adult clone in a hidden proto-chamber(a device that allows cloning), giving the aspiring god-king another life to live again as Pyron III.

In the event of another sudden death, Pyron III had the foresight to have his genetic material spread throughout the colonies that can be activated at will. When the new imperial clone awakens, his proto-chamber alerts the Sunglari Homeworld, sending a ship to bring him home. One such proto-chamber was sent on with the colonists who were marooned on Ourobouros. Upon landing, the emperor's clone was awakened prematurely, and Pyron IV led his people to glory in the jungles of Nazca and away from the dangers of the Sunshield. A proto-chamber was one of many artifacts left behind in the Exodus, with just enough genetic material to create another imperial clone.