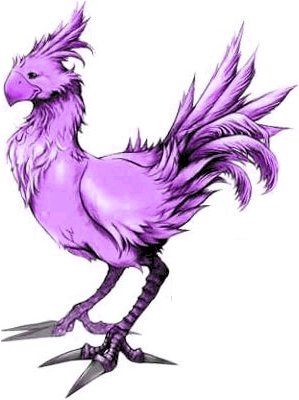 A large lavender fowl preens in the grass, standing about eight or nine feet tall. Several others of its kind are around it, eating greens and nuts. Its long hard-scaled, three-toed legs make up a good portion of its height, the rest is feathery torso, wings, neck and head. It is almost entirely purple, from its eyes to its tail feathers; even its scaly legs and hard, sharp beak are tinted purple.

Flapping its wings furiously to create friction in its feathers, a purple chocobo can release a line of electricity (chnneled along a thin sprayed strand of saliva), dealing electricity damage to the target of its ranged touch attack. This is a full attack action that provokes attacks of opportunity. This attack deals 2d8 plus half the chocobo's HD in electricity damage on a successful hit. A purple chocobo is unharmed by its own Choco Bolt. This attack is treated as an exceptional projectile weapon and has a range increment of 10 ft.