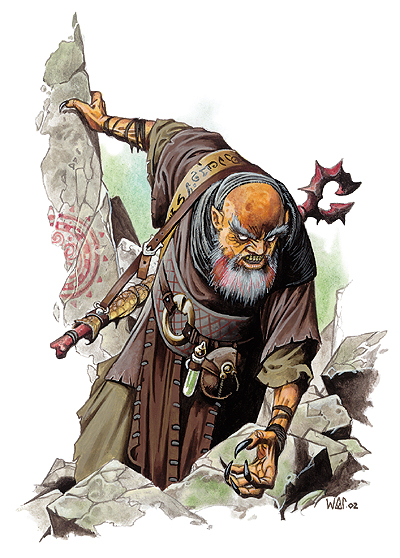 Proficiencies: The possessed are proficient with whatever weapons, armors or shield the fiend that possesses them is proficient with, although wearing armor may interfere with somatic components for arcane spells.

Spellcasting: At each level, the possessed gains spells known and spells per day as if he had gained another level in an existing spellcasting class. This does not grant other benefits, such as familiar benefits, wizards bonus feats or the ability to turn or rebuke undead.

Improved Attribute (Su): The fiend the dwells within it's host may improve an attribute to +6 instead of the usual +4. This improved to +8 at 5th level. This also applies to a penalty to an ability score, if the possessing fiend chooses to do so.

Dualmind (Ex): The host and it's possessing fiend begin to meld with each other's mind. The host and the fiend are allowed access to whatever knowledge the other possesses, including feats, languages and skills based on Int, Wis and Cha.

Soul of Evil (Su): The host and it's fiend grow ever closer to being one, in so the host gains power from the fiend. Twice per day, it may enter a state that lasts for 10 + hosts cha modifier rounds. In this state, the host may use the fiends spell-like abilities as the fiend would, including summon Tanar'ri or summon Baatezu. This does not allow the host to use spell-like abilities of equivalent spell levels they would not be able to cast as if they were a wizard or cleric of that level. For example, Borik Redmoon is a 5th level wizard/6th level Possessed and possessed by a Nalfeshnee, he is incapable of using Greater Teleport as a spell-like ability because it is equivalent of a 7th level spell.

Fiendform (Su): The fiend and it's host begin to attune to each other's physical form. The fiend may spring forth, using the hosts body, as a standard action, the fiend, if he chooses, may transform his host body into the body that he normally has. He is treated as a normal fiend of his type. He does not gain access to the hosts special abilities or spells, but still can gain access to their skills, feats, and languages. This is usable 3 times per day and lasts a number of rounds equal to 3 + fiends cha modifier.

Improved Fiendform (Su): The bond between the host and the fiend becomes very strong. The host gains the outsider type with the native subtype, gains resistance to fire 5, electricity 5 and cold 5, darkvision out to 60 feet and natural claw attacks that deal 1d6 + str modifier damage per hit. Also, the fiend may use fiendform at a permanent duration and may switch between his and his hosts form at will as a standard action, also gaining the use of the hosts spells and special abilities.

Special: If the fiend decides to leave the hosts body, either through their own will or if the fiend dies, the host loses all special abilities and weapon and armor proficiencies gained from his class. They retain BAB, saves and spellcasting, and hitdice, but nothing else, as well as the inability to advance further in this class.

NOTE: I made this class knowing that it is by all means possible a character could be possessed by a very powerful fiend, but it's not at ALL the character's choice to be. So it is up to the DM to have a bit of brainpower about this if someone wants this class and possess them by something that is of equal CR or ECL or HD or whatever is most appropriate. So if the character's rampaging about in the shape of a Balor and he's less than 20 HD, it's the DM's fault.