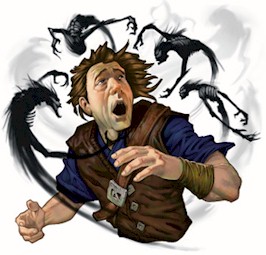 Despite what their name suggests, phantasmists are masters of all forms of illusory magic, not just phantasms. They spend their lives studying both the Art and nature itself, attempting to blend reality and fantasy into a beautiful (and somethings horrific) amalgamation. Some are full of hubris, firmly postulating that if the gods gain their abilities through the power that belief grants them, then they can skip the middle man and control reality though belief directly.

Abilities: Intelligence and Charisma are, by far, the most crucial abilities for a phantasmist. You rely entirely upon your cunning and your wits in order to deceive others with your wonderful illusions. Dexterity is also an important ability, as you will often need to rely on more traditional and mundane forms of misdirection and trickery in order to accomplish your goals.

Races: Gnomes and humans are, by far, the most common races to take up the mantle of a phantasmist. It is not, however, uncommon for other races to do the same, with elves and halflings being the more likely to do so compared to dwarves or half-orcs; the latter prefer more aggressive forms of magic over the subtle nuances that a phantasmist relies upon.

Alignment: Phantasmists can be of any alignment, though many tend to be chaotic by their very nature. It is a rare day when you encounter a lawful phantasmist, but it is not unheard of, either. Likewise, they show no real preferences between good and evil, at least no more than anyone else. Good phantasmists tend to use their powers to protect their homes and their people, while evil phantasmists prefer to use theirs to exploit those who are weak of will.

All of the following are class features of the phantasmist

Weapon and Armor Proficiency: You do not gain any additional proficiency with weapons or armor beyond those you already possess.

Spells Per Day: At each level, you gain new spells per day (and spells known, if applicable) as if you had also gained a level in an arcane spellcasting class to which you belonged before adding the prestige class level. You do not, however, gain any other benefit a character of that class would have gained. If you had more than one arcane spellcasting class before becoming a phantasmist, you must decide to which class to add each level for the purpose of determining spells per day and spells known.

Cloak of Illusions (Su): As a master of phantasms, glamers, and figments, you can cloak your form in shifting shadows and other minor illusions. This ability provides you with a variable amount of concealment depending on your level. While your cloak of illusions is active, attacks against you have a miss chance equal to 15% + 5% per class level. Darkvision and low-light vision offer no help in piercing the cloak of illusions, although any creature using true seeing can ignore the miss chance on a successful Will (disbelief) check (DC equals 20 + class level). You can dismiss or resume this effect as a free action. While your cloak of illusions is active, you can make Hide checks as if you had the Hide in Plain Sight ability.

If you gain a similar ability from another source, including spells such as blur or displacement, they do not stack. You use the highest miss chance of the different effects unless the additional effects explicitly states otherwise. The secondary effects of your cloak of illusions continue to benefit you, however.

Smoke and Mirrors (Ex): Once per round as a swift action, you can make a Bluff check to feint, or a Sleight of Hand check.

Tricks of the Trade (Sp): You can use the 0-level spells dancing lights, ghost sound, and shadowplay at will as spell-like abilities. You use the same spellcasting ability score as your arcane spellcasting class.

Subschool Specialization (Su): You may spontaneously convert any of your prepared spells into a figment, glamer, or phantasm spell you know. If you do not normally prepare spells, you gain no benefit from this class feature.

Shadow Steed (Su): You may use the spell phantom stag at will as a supernatural ability. This supernatural ability is treated as an Illusion (Shadow) spell rather than a Conjuration (Creation) spell, and you have full control over the appearance of your mount. It could resemble a stag, a horse, a riding dog, a griffon, a pegasus, a hatchling dragon, or any other appropriately sized steed for your size that you can imagine, within reason. You may create only one shadow steed per two class levels (round down); attempting to create more than that causes all existing steed to pop out of existence.

Mastery of Illusions (Ex): Your ability to cast illusion spells improves dramatically. Any illusion spell you cast is treated as if they were prepared with the Still Spell and Eschew Materials feats. In addition, you can spontaneously apply any metamagic feats you know to your illusion spells without increasing their casting time. If this is a shadow evocation or shadow conjuration type of spell, the metamagic feat carries over into the simulated spell effect.

Shrouded in Realism (Su): Your illusions are so exceptional that even creatures normally immune to illusions or mind-affecting effects may still believe them as real. Such opponents gain a standard Will (disbelief) saving throw upon first encountering them, as well as when they first interact with them (at which point they gain a +5 circumstance bonus to their saving throw). This also applies to abilities that can normally see through illusions, such as true seeing or arcane sight spells.

Distort Reality (Su): Your understanding of illusions has become so profound that you can actually attempt to "disbelieve" reality itself, and even exert control over it!

Once per day per Wisdom modifier (minimum 1), you can attempt to disbelieve a non-animated object, effectively turning it into a figment of your imagination. This effect lasts as long as you are able to maintain concentration. The object effectively becomes ethereal and gains a slightly translucent appearance to it for the duration of the effect. The maximum size of such an object cannot exceed Huge, or Gargantuan if you are a gnome due to your natural affinity for such things.

Alternatively, you can treat the object as an animated object, as per the spell animate object. This effect, like the previous one, lasts only as long as you maintain concentration.

Regardless of the method you wish to enact, you must succeed at a Concentration check with a DC equal to 20 + 2 per size category above Fine. Thus, attempting to animate a Huge object would require a DC 32 Concentration check. Failure indicates that one of your daily uses of this ability is consumed, and you may not attempt to distort the same object again for 24 hours. You may not take 10 or 20 on this check.