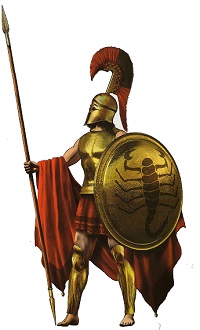 For many hundreds of years wars were fought by phalanxes of troops clashing while irregular infantry, cavalry and skirmishers fought on the periphery of the field and tried to pick at the flanks of the phalanxes. While more versatile troops now take center stage in most of the world the phalanx is still used by the elves of Estra, parts of Koorbrook and several of the Confederated States as well as numerous hobgoblin tribes and dwarf clans.

Fighters are the most likely to take this prestige class, particularly if they hail from a region where the phalanx is still widely used in warfare. The occasional cleric has been known to dabble in the class if they spend significant time tending soldiers typically formed into a phalanx, and paladins who don't mind abandoning their mount find the class fantastic. It is incredibly unusual for other classes to take this prestige class. As a heavy infantryman only strength and constitution have any real value to the class.

Negate Squeeze (Ex): A phalanx of spearmen is far more effective when compressed with two soldiers sharing the same square and concentrating the number of spear points in a given area. All Phalanx Specialists thus receive advanced training fighting with limited room to move. The -4 penalty to attack and AC for squeezing (see PH pg148) is negated for the Phalanx Specialist.

Share Cover (Ex): Once per round as a free action the Phalanx Specialist may designate one adjacent ally to receive a +4 dodge bonus to AC. This bonus lasts until the start of your next action so long as neither you nor the recipient moves before that time and only if the Phalanx Specialist is wielding both his longspear and shield.

Greater Aid Another (Ex): When using the Aid Another action you grant whomever you are aiding double the bonus you normally would (+4 bonus instead of a +2.) This ability stacks with the feat Improved Aid Another (to provide a +8 bonus.)

There is no penalty for abandoning this class. Nor any restrictions to continuing advancement at a later time.

Combat: The Phalanx Specialist excels when in tight formation with other melee classes. More allies mean larger bonuses for Improved Cover, more options to target with Share Cover and Greater Aid Another, and more allies affected by Rally and Unified Front. The ideal partner is an offensive melee type who probably had to sacrifice armor and shield for more powerful weapons who will benefit from both offensive and defensive abilities shared by the Phalanx Specialist.

Advancement: Usually Phalanx Specialists are content to return to Fighter levels when they reach 10 levels of this class, sometimes alternating levels between the two classes.

Phalanx Specialists in the World[edit]

NPC Reactions: To most NPCs the Phalanx Specialist is just another professional soldier. For other hoplites though he is a hero, a champion who will not only overcome any enemy but bring his companions through the fray as well.

Characters with ranks in Knowledge (history) can research Phalanx Specialists to learn more about them. When a character makes a skill check, read or paraphrase the following, including information from lower DCs.

Phalanx Specialists in the Game[edit]

Adaptation: Replace the kingdoms or races in the descriptions above with those appropriate to your campaign.

Polifesius is a professional soldier from a long line of military men and he conducts himself as such. As a Phalanx Specialist he has the advanced training to expect to be treated with respect by all but the highest ranking officials and doing otherwise is a good way to earn his lasting enmity.