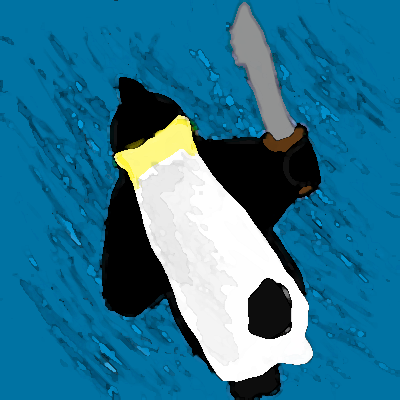 Penguins, though often popular with other races despite occassional language barriers, are a reclusive type. They tend to live either in small, outset communities or smaller nomadic tribes. Due to the splintered nature of their race, their history and cultural identity is expansive and confused. Some tribes claim common ancestry with dragons, others claim Penguins were once air elementals that fell out of favour with a god and trapped in the form of flightless birds. Penguin groups have recently began to band together and live gathered in the wintery parts of the world, but countless tribes still live alone and travel the lands.

Play a Penguin if you want...

Penguins are relatively large, as birds go, but are diminutive compared to most humanoids. They mature at about twice the rate of humans, and can live to 50 years of age.

Penguins are a likable sort, and generally don't stir a wing to seek a foe. As such, they rarely have battles of their own to fight, and adventurous penguins seek worthy folk to aid. If they do have a personal score to settle, not much will deter them from their quest. Penguins have a strong sense of duty and loyalty, and are fiercely proud of their perceived history. They make good allies, excellent friends, and formidable foes.

Kozi is a fighter from a small village situated on a freezing mountainside. Having learned all the villages Swordsmaster can teach her, she set off into the world with her blade and provisions, tasked with learning of the world so that she may be ready to take up the mantle of Swordsmaster upon return to her village.

Skip was a captain in a Penguin mercenary militia. After their full force was devastated and split in a battle with an evil warlock, Skip and four of his soldiers found themselves transported to parts unkown. Skip now leads them across mountain and plain to find their home village again, and finally defeat the warlock that killed their brothers-in-arms.

Tibbles was a proud fighter for his tribe, and was the only penguin left standing when it was conquered by an army of half-orcs. Captured and sold to a decadent human, he eventually broke free and slew his captor. Seeking revenge, he refuses to be stopped for ought but sleep as he hunts down the half-orcs that took away all he held dear.