Path of the Titanborn (5e Subclass)

"You know nothing of true rage and passion. True rage fills the soul and brings to this realm a mass of pure brutality and ambition that consumes all within its reach."

There were some men born from the flesh and blood of the Titans themselves, having energy coursing into their veins since birth, waiting for its power to mature and be unleashed into the realm and be known by the world. People from the outskirts of civility that were born this way all know instinctively that they were different from others of their kind, and that even if its folks beared the same appearances, the power that lies inside of them hungers for greatness and change. As they grow, so do their titan lineage which starts to show as marks on their very bodies, and to shape and control this heritage is their duty and their pride. 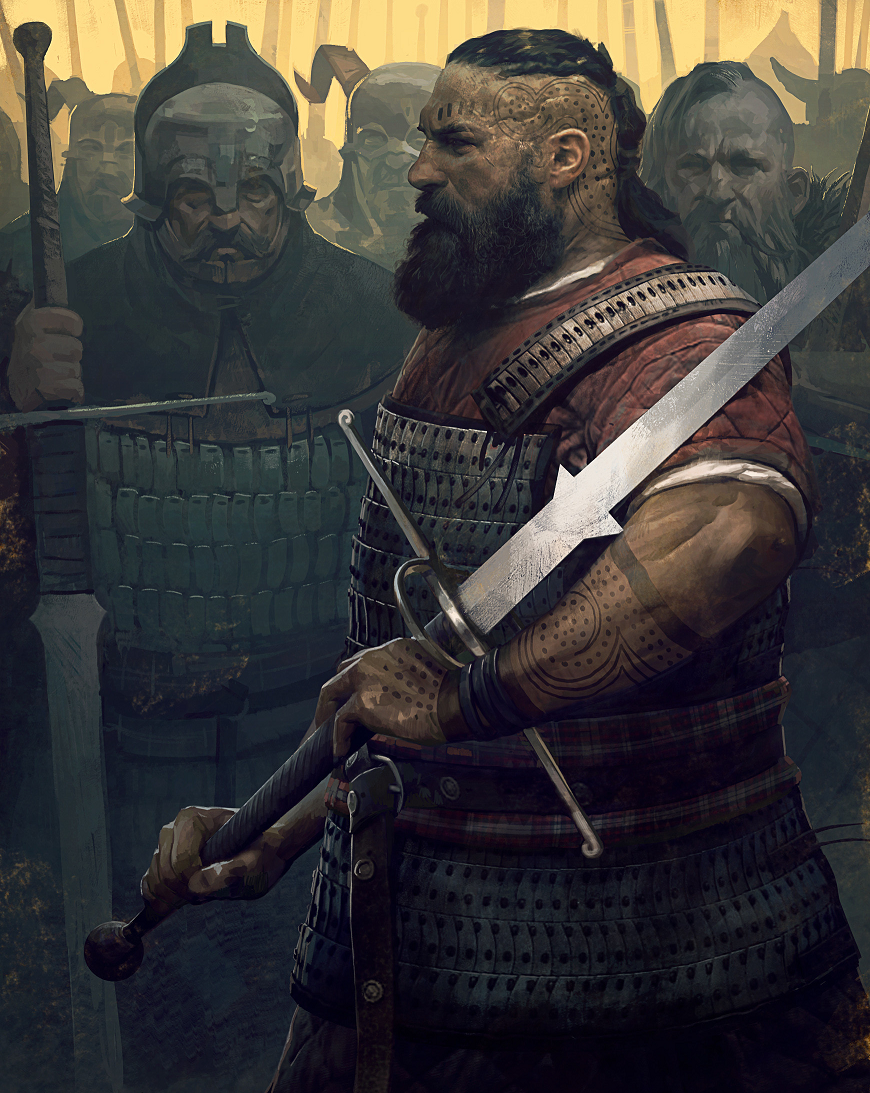 Wherever a Titanborn goes, so does battle and glory.

As you grow in power, you unleash the magic force from your heritage that shapes itself as runes that fill your skin. At first they appear as tattoos, yet their roots run much deeper, reaching your muscles and bones. Beginning at 3rd, you gain access to a source of runic power which can fuel some of your abilities. The source starts with 3 runic power, plus a number equal to your Charisma bonus, and increases by 1 point for every barbarian level you gain. You may spend runic power to fuel the usage of the runic arts, also, you recover all your runic power in a long rest. When you choose this path, you have first to pass a rite to awaken your runes, which normally includes meditating to receive guidance of their inscriptions. As you release them once, they start to conduct your runic power and whenever you gain additional points, the runes carved on your body expand and changes shape, getting more complex as you grow.

After you've unlocked your inner energy, your body and your perception of the world around has change drastically. Starting at the 3rd level, you start to see and feel the flow of battle, becoming capable of predicting your enemies actions instead of reacting to them. You can choose to add your Charisma bonus modifier to your AC instead of any Dexterity bonus you have. Also, the foundation of your rage changes and instead of primal rage, it becomes a composed and ruthless state of carnage, mirroring the oppressive will of the conqueror. While you rage, you can't be charmed or frightened, if you are charmed or frightened when you enter your rage, the effect ends. Also you can cast cantrips and runic arts freely since you can keep your mental capabilities mostly unaffected by the battle trance.

As you unleash the power of your runes, you are able to channel energy into them to distort the physical space around you. Beginning at 3rd level, you gain access to 3 runic points, plus a number of points equal to your Charisma bonus, and increases by 1 point for every barbarian level. Runic arts require you to be in rage to activate the runes, also you may use any runic art below that you have enough level to access.

At the 3rd level, you are able to imbue your weapon with runic energy, pouring titanic might into them. As a bonus action, you can spend 1 runic power point to imbue your weapon with runic energy. Your strikes with that weapon start to count as magical for the purpose of overcoming resistance and immunity to nonmagical attacks and damage. You can add a magic bonus to your weapon strikes equal to your Charisma bonus modifier. This effect lasts for 1 minute.

At the 3rd level, you are able to distort the air around you, forcing a change in trajectory for any projectiles targeted at you. You can spend 2 points of runic power to impose disadvantage against all ranged attacks made targeting you as a reaction, and they do only half of the damage if they hit. This effect last until the end of your next turn.

At the 6th level, you are able to make a wild swing as you rely on your rune enhanced body to keep the momentum swing till the end. When you make an attack action, you can spend 1 point of runic power to instead execute one brutal, wide swing that hits every ally and foe within your weapon strike reach. All allies and foes in your melee swing reach may do a Dexterity saving throw (DC = 8 + proficiency bonus + Charisma bonus modifier). If they succeed, they take half of the damage. If they fail, they take the full damage and you can choose to push them 5 feet away from you if you wish so. You can only use this feature once per turn.

At the 6th level, you are able to write out a rune out of thin air that blesses you with an instant protection against some harmful effects. You can spend 2 points of runic power to negate an affect that would submit you to a Constitution or Dexterity saving throw with a reaction, so long as you can see it. The blessing can function differently depending on the source of damage, making a runic immaterial wall to defend against area of effect spells or attacks, or enhancing your constitution temporarily, protecting you from internal or external afflictions.

At the 8th level, you are able to circle your weapon with pure runic energy and extend the reach of your strikes. As you make a melee weapon swing, you can spend 1 point of runic power to extend the reach of all your melee weapon strikes in 10 feet for each runic point spent. You can choose to spend a maximum of 3 points of runic power to extend your reach in 30 feet instead. This effect lasts for one turn.

At the 11th level, you are able to channel energy from the runes to strengthen your lower body, in sequence proceeding to an immensely powerful long step. As a bonus action, you can spend 1 point of runic power to execute a seismic charge, moving up to 30 feet in a single line. Also, you may spend another runic power to try to trample a single enemy that is in the way of this feature, and as you get to him doing so, you try to shove him. If you win the contest, you knock the target prone and push it till the adjacent square of your final position. If you fail the contest, the target stops you on your tracks and you are knocked prone instead. You receive a +1 bonus to this action for each 5 feet you moved with this technique till you reached him.

At the 11th level, you are able to circle your own feet with runic power to the point that your steps are as firm and true as they could be. At the start of your turn, you can spend 1 point of runic power to assure a steady pace at any terrain, making you able to negate ground base effects. You also receive advantage against effects that pushes, pulls or knocks you prone. This effect lasts until the start of your next turn.

At the 14th level, instead of giving a barrage of wild strikes, you can calmly pursue the forces within and energize your full body by overloading your runes for an instant, unleashing a calculated blow that leads to a powerful and devastating one, building the momentum from the first swing to overpower your enemies. Whenever you choose to do an attack action, if you manage to hit the first strike, you can choose to use this feature. You can spend 2 points of runic power to deal a follow up melee strike that deals double the usual damage calculation on hit. Managing to succeed to hit with the second swing, if the target is a large creature or smaller, it is pushed back by 15 feet. If it is of a bigger size, it gets knocked 5 feet less for each size difference. Whenever you use this feature, you receive an exhaustion level, regardless of you hitting the attack or not.

At the 18th level, you are capable of harnessing your runic energy with such mastery that it is possible to give it a tangible form, even if it is separated from your body. As an action, you can spend 2 points of runic power to form a storm formation in a place of your choice within 150 feet of you and propagates lightning around from there. Each creature in a 20-foot-radius sphere centered on that point must make a Constitution saving throw (DC = 8 + proficiency bonus + Charisma bonus modifier). A target takes 12d8 lightning damage and becomes paralyzed for one turn on a failed save, or half as much damage on a successful one. You can use this feature again once you finish a short or long rest.

Starting at 6th level, as you walk, your presence has a majestic feeling that causes people to be captivated by it. When you speak, your words are ingrained into their very beings, as if they instinctively knew of your noble heritage.You have proficiency on Charisma (Persuasion) and Charisma (Intimidation) checks if you aren't already, and if you do, double those bonuses. This unique aura around you also makes it difficult for you to pass unnoticed by people, and your pride in your heritage won't allow you to hide often either. You cannot become proficient in Dexterity (Stealth) checks, and if you were, you can exchange it instead to a proficiency in Intelligence(Nature), Wisdom (Medicine), Intelligence (History) or Wisdom (Animal Handling) checks.

Starting at 10th level, you become a colossus owner of immeasurable strength to the point of being able to fight toe-to-toe against foes fairly bigger than you, having a powerful grip strong enough to physically challenge gigantic creatures. You gain the following benefits:

Beginning at the 14th level, the runic energy has assimilated with your body to the point that your ability to recover from wounds and fatigue in general is unlike any other of your kind. You recover a level of exhaustion whenever you do a short rest, as well a 3 levels of exhaustion every time you finish a long rest instead of 1. Also, if you choose to rest continuously for a whole week, you can manage to rebuild lost limbs, but will be afflicted by a loss of energy that will unable you to benefit from any part of this feature for another week.

Starting at 14th level, the inscriptions in your body have developed to the point that the knowledge they provide you allows you to summon the energy that lies in your essence. Your runic power may deplete, but its never devoided and you can reach the deepest parts of your runes to channel it when faced with combat. Whenever you roll initiative, and have no runic points left, you can regain points up to your Charisma bonus modifier and by doing so, you reduce the equivalent points to your initiative score. You still have to respect your maximum resource values.