Overwatch Soldiers are the backbone of the Combine presence on Earth. They are genetically enslaved and enhanced trans-human soldiers who feel no emotion and have only minimal traces of self-preservation (just enough to remain effective in combat). Being the most-common combine units in the field, they are often sent in to assist heavier assets such as the Overwatch Elite, Hunters, Gunships, and even underfoot of the Striders. 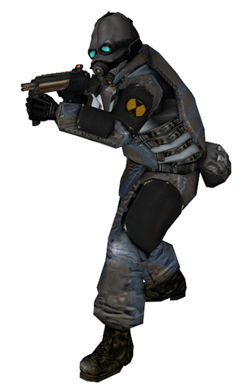 Overwatch Soldiers are the most common Combine soldiers. They are often led by an Overwatch Elite to coordinate tactics, but they are certainly able to use flanking and other simple tactics on their own. They come in sqauds of 2-6 members, at least 1 holding an AR2 Pulse Rifle and the rest holding a Combine H2 SMG. They are equipped with a CP Powered Combat Suit . All Overwatch Soldiers have 1d4+1 ammunition magazines for their selected weapon.

As a full-round action, an Overwatch Soldier can provide tactical aid to all of his allies (including himself) within sight and voice range of his position. This use of tactical aid requires an action point. This aid provides a +1 competence bonus on attack rolls. The bonus lasts for a number of rounds equal to one-half of the Overwatch Soldier’s level in the advanced class, rounded down.

Grenade Lob (Wp) An Overwatch Soldier can Lob a Combine Grenade as a standard action.